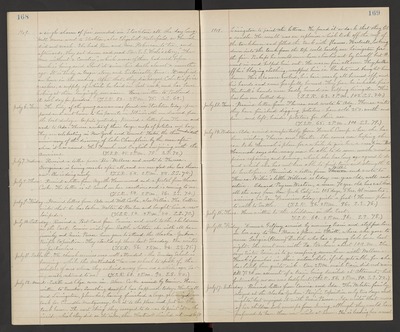 1909. a single alarm of fire sounded in Stockton all the day long. Will Moore went to Stockton, also Elizabeth Westerfield, so Hannah did not wash. She had Rev. and Mrs. Robinson tea, and afterwards, they sat down and read Rev. E.E. Hale's story, "The Man without a Country", which none of them had read before - much is being said about it since his death almost a month ago. It is truly a tragic story, and historically true. It occupied an hour in the reading. After that, they discharged Celeste's fire crackers, a supply of which he laid in last week and has been looking at them longingly ever since. Have written to Portland. A cool day for paraders. (T.S.R. 52. 2 P.M. 75. S.S. 62.)

July 6. Tues. The body of the young seaman was found in Stockton today - prepared and sent to his parents in Illinois - the one drowned from the boat-destroyer-torpedo yesterday. Received a letter from Theresa and wrote to Ada. Theresa writes of their large crops of potatoes and hay. They are celebrating in New York and Vermont States, the three hundredth anniversary of the discovery of Lake Champlain by the man after whom it was named. The French and English are joining with the Americans. (T.S.R. 48. 2 P.M. 78. S.S. 72.)

July 10. Saturday. Received a Post Card from Eunice and wrote to the children in the East. Eunice writes from Seattle whither she with all her family and Susie Pascoe have gone to attend the Alaska-Yukon- Pacific Exposition. They started up there last Tuesday. She writes no particulars. (T.S.R. 56. 2 P.M. 86. S.S. 75.)

July 11. Sabbath. The church services were well attended - the Sunday School is booming - awhile the Methodists have no school to speak of the scholars of ours whom they enticed away from us a while ago, having mostly returned to us. (T.S.R. 60. 2 P.M. 92. S.S. 80.)

July 12. Mond. Estelle and Olga came in. Alma Cooke arrived by train. Have written to Eureka. Something dreadful has happened today. Hartwell and Livingston, plumbers, having finished a large galvanized iron tank for Chandler Montgomery, took it to the place and put in the tank house. The next thing they essayed to do was to paint it on the inside, which they did on its sides, then Hartwell climbed out and left

1909. Livingston to paint the bottom. He found it so dark that they lit a candle. The result was on explosion which took off the roof of the tankhouse and filled the tank with flames. Hartwell, looking down into the tank from the top could hardly see Livingston for the fire. Perhaps he would never have climbed by himself but H. went in and helped him out. He was on fire all over. They pulled off he's blazing clothing, wrapped him in blankets and brought him home. His lips were cooked, his hair nearly all burned off, and his hands and arms fearfully burned. They fear he inhaled fire. Hartwell's hands were badly burned in helping Livingston. This has been our hottest day. (T.S.R. 63. 2 P.M. 102. S.S. 84.)

July 14. Wednes. Ada arrived unexpectedly from French Camp where she has been visiting Theresa and Hester. She comes now hoping she can take Hannah's place for a while to give her a vacation. But Hannah says she may now be able to do some much needed piano repairing and tuning, which she has long ago agreed to do and which she has not been able to find time and strength to do heretofore. Received a letter from Willie and wrote to Theresa, Willie's little Willard is today one year old, well and active. Edward Payson Weston, a man 70 yrs. old has walked all the way from New York City in 105 days. 5 hrs. 41 minutes, arriving in San Francisco today - quite a feat! He now plans to walk to Seattle. (T.S.R. 56. 2 P.M. 96. S.S. 76.)

July 16. Friday. Hannah Geffroy arrived by morning train stopped here on her way to Mr. Brown's place in Elliott, where she goes to nurse Georgia (Brown) Dutch who has a young babe born last night. She went over with Dr. Barbour about 10 A.M. She says Sister Susie is to go camping somewhere with Wallace's and Frank's families in their automobiles, if she gets able, for she has lately been quite sick - Our 2 P.M. mail train did not arrive till 7:20 on account of a train being derailed at Altamont, but fortunately no one was badly hurt. (T.S.R. 56. 2 P.M. 90. S.S. 72.)

July 17. Saturday. Received letters from Eunice and Ida. The Webster family stayed at the Alaska-Yukon-Pacific Exposition only two days and nights, but enjoyed it with Susie Pascoe. Ida writes that none of her children took mumps from Irving, although they would have preferred to have them now while at home. She is leading her usual