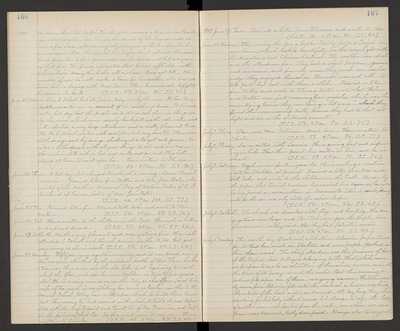 1909. We learn that Dr. Ralph Huntington, serving a term in San Quentin, for manslaughter, has been pardoned out by the Governor and is now a free man, after serving only one year of the ten for which he was committed. His appeal to a higher Court reduced the sentence from ten to four years, and now he has served but oneyear of that four. His friends represented that he was afflicted with tuberculosis. Many think this all a sham - time will tell. We wonder if now he will make a home for his mother, who has no home, but is staying with Aunt Susie. Their home was sold to fight his case in the courts. (T.S.R. 59. 2 P.M. 95. S.S. 85.)

June 23. Wednes. Our S. School had its picnic today over by the river. It has been postponed until now on account of the measles epidemic. It turned out a hot day, but the people said it was cool there in the grove by the river which runs nearly bankfull with cold water and all reported a very large attendance and a really pleasant time. The M.E. School united with ours (it is but very small). There were little swings and big swings, shooting at a target and games, besides a table spread with all good things to eat and ice cream. Hannah is still sick in bed and could not go, and Elizabeth stayed at home to wait upon her. Have written to Theresa. (T.S.R. 64. 2 P.M. 98. S.S. 90.)

June 28. Monday. Fiftyone years ago this morning, and it was Mond, morning too, we were startled by the sudden death of Bro. Elmer Locke. Ada was then a six-months old babe, just beginning to crawl about the floor, and now her son Weldon is twenty five years old! He is serving some man in the City as chauffeur, and his wife of two years is completing her course as teacher in the S.F. Normal School. They have a lot upon which to build their home but the money he had earned with which to build it, was deposited with Safe Deposit and Trust Co. of San Francisco, and lost in the failure of that Co. So they must earn it over again. Have written to Eureka. (T.S.R. 45. 2 P.M. 83. S.S. 66.)

June 30. Wednes. This evening the Young People's Society held a Social on our lawn, which looked beautifully in the moonlight with the decorations and Chinese lanterns. The weather was ideal and the attendance fair. They had a short program, games and ice cream, and from the noise they made one would judge they enjoyed themselves. Hannah was not able to take part but sat with them a while. Received a letter from Willie and wrote to Theresa. Willie wrote that Helen and Walter were just recovering from measles, which was the more trying because they were having a "hot wave", which they found the more uncomfortable because they had to shut out light and air on the children's account. (T.S.R. 53. 2 P.M. 90. S.S. 75.)

July 3. Saturday. Myrle is now fourteen years old. She is making a vacation visit in Stockton at present. Received a letter from Ada and Will Cooke and wrote to the children in the East. We see by the papers that Daniel Marceau has received his degree as lawyer having passed an examination in Sacramento. This is surely doing well for the son and only child of a saloon-keeper. (T.S.R. 50. 2 P.M. 86. S.S. 69.)

July 4. Sabbath. The church was decorated with flags and bunting, the congregations were large and Rev. Robinson gave the people two fine sermons, so they said. Also they had patriotic music. (T.S.R. 50. 2 P.M. 81. S.S. 62.)