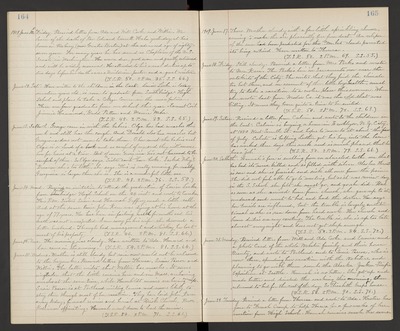 1909. June 11. Friday. Received letter from Ada and Will Cooke and Willie. We learn of the death of Rev. Edward Everett Hale yesterday at his home in Roxbury (now Greater Boston) at the advanced age of eightyseven years. For many years he has served as Chaplain of the U.S. Senate in Washington. He was a dear, good man and greatly esteemed and will be widely mourned. He attended to his usual duties up to two days before his death - was a Unitarian pastor and a great writer. (T.S.R. 50. 2 P.M. 85. S.S. 66.)

June 12. Sat. Have written to the children in the East. Louise Locke is today seventeen years old, is soon to graduate from Southbridge High School and plans to take a College Course in the near future. There are four graduates from our school this year - Earnest Coil Jimmie Hammond, Budd Patton and Mamie Weber. (T.S.R. 48. 2 P.M. 83. S.S. 65.)

June 13. Sabbath. George came in with the babies. Olga has had measles this week and still has the cough. And Donald also has measles but Georgiana does not seem to take them. O how sweet the babies are! Olga is so fond of a book and so careful of one and they will amerse her for hours at a time. But of course Georgina has not learned to be careful of them. So Olga says, "Sister can-t have books". I asked "Why?" Because she's too little", she says. This is really amusing, for really Georgiana is larger than she is. She is a wonderful little one. (T.S.R. 48. 2 P.M. 76. S.S. 58.)

June 14. Mond. Received an invitation to attend the graduation of Louise Locke from Southbridge High School on the 24 inst. and wrote to Eureka. This P.M. Sisters Susie and Hannah Geffroy made a little call. And at the same time John Kerr was dying at his home at the age of 77 years. He has been in failing health for months and his death was not unexpected. I am sorry for his wife - she deserved a better husband. Through bad management and whiskey he lost most of his property. (T.S.R. 46. 2 P.M. 81. S.S. 66.)

June 16. Wednes. Weather is still cloudy but rain now would not be welcome to the haymakers. Received letter from Theresa, Susie Pascoe and Willie. The latter writes that Walter has measles. It seems singular that the little cousins here and in Mass. are having measles at the same time, while Humboldt cousin's aer having mumps. Susie Pascoe is at Portland visiting Eunice and seems likely to stay there through most of her vacation. They have laid John Kerr away today, funeral services and burial at Brick Church, Rev. Robinson officiating. Hannah went down to lead the music. (T.S.R. 54. 2 P.M. 71. S.S. 61.)

1909. June 17. Thurs. Weather cloudy with a few little sprinkling showers, seeming to make the air pleasantly free from dust. An eclipse of the sun had been predicted for the P.M. but clouds prevented its being noticed. Have written to Theresa. (T.S.R. 52. 2 P.M. 69. S.S. 55.)

June 18. Friday. Still cloudy. Received a letter from Mrs. Perks and wrote to Mrs. Kerr. The Perk's live in Sacramento now near the outskirts of the City. She writes that they find the climate too hot there, and on account of their little boy's health, must try to take a vacation to a cooler place this summer. When she wrote last from Modoc Co. it was the cold that was killing. It seems they have quite a time to be suited. (T.S.R. 50. 2 P.M. 72. S.S. 63.)

June 20. Sabbath. Hannah's face is swelling from an ulcerated tooth one that has had its nerve killed and is filled with silver. Also her throat is sore and she is feverish and sick all over from the pain. She did not feel able to go to meeting, but as it was review day in the S. School she felt she must go, and go she did - But as soon as she arrived home from church, she gave up to it, undressed and went to bed and had the doctor. He says her tonsils are inflamed, but the trouble is largely constitutional as she is run down from hard work. Her church and home duties are very exacting. The trouble is, she is up too late almost every night and does not get sleep enough. (T.S.R. 52. 2 P.M. 84. S.S. 72.)

June 21. Monday. Received letters from Will and Ada Cooke and Eunice and a photo Card of the whole Webster family and their horse Beauty, and wrote to Portland and to Susie Pascoe, who is now there, spending her vacation with the Websters, and planning to go with them soon to the Alaska-Yukon-Pacific Exposition at Seattle - Hannah is no better, She got up and made butter and directed the washing this morning, then returned to bed for the rest of the day. So Elizabeth keeps house. (T.S.R. 56. 2 P.M. 90. S.S. 76.)

June 22. Tuesday. Received a letter from Theresa and wrote to Ada. Hester has gone to French Camp, to help Theresa for a few weeks of her vacation from High School. Hannah remains much the same.