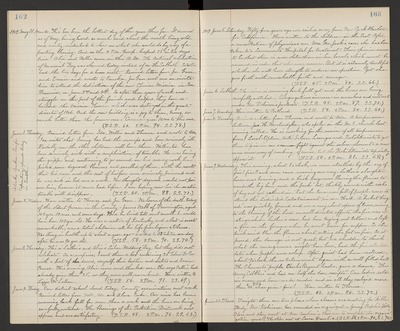 1909. May 31. Mond. This has been the hottest day of the year thus far. It seemed as if May, having heard so much said about the mouth being cold and wintry, under took to show as what she could do by way of a parting blessing. And so the 2 P.M. temp. leaped 23- in two days time. Alice and Nellie came in this A.M. The National celebration of Memorial Day was observed today instead of on the Sabbath. So Nellie had, the two days for a home visit. Received letters from Jee Gam and Eunice and wrote to Eureka, Jee Gam sent me an invitation to attend the dedication of the new Chinese Mission in San Francisco, on June 3rd and 4th. So after three years of work and struggle on the part of the friends and helpers, they have rebuilded the Mission House which was destroyed in the great disaster of 1906. And the new building is a joy to them, being so much better than the former one. Carnegie gave $10,000 to this one. (T.S.R. 60. 2 P.M. 94. S.S. 78.)

June 1. Tuesday. Received letters from Ida, Willie and Theresa and wrote to Ada. Ida writes that Irving has had the mumps and seriously ill. Probably now the other children will have them. Willie, too, has been seriously sick with a complication of troubles. He was having the grippe and continuing to go around on his survey work, he picked some dogwood blossoms and smelled of them, with the result that his nose and the rest of his face were seriously poisoned and he was sick in bed over a week. He thought dogwood would not poison him, because it never had before. I am hoping now his rheumatic trouble will disappear. (T.S.R. 60. 2 P.M. 88. S.S. 72.) Alaska-Yukon-Pacific Exposition opened today in Seattle.

June 2. Wednes. Have written to Theresa and Jee Gam. We learn of the death today of the oldest person in the County - James Webb of Farmington, aged 102 yrs-10 mos. and some days. Had he lived till next month he would have been 103 yrs. old. He was a native of Kentucky, and what is most remarkable, was a total abstainer all his life from liquor & tobacco. Was strong in health up to about a year ago - walked to Stockton one day after he was 90 yrs. old. (T.S.R. 58. 2 P.M. 90. S.S. 74.)

June 3. Thursday. This is Luther's and Alice's Silver Wedding Day, but they did not celebrate. As a surprise, I sent them a box containing 25 Silver Dollar with a list of the donors, myself, their brothers and sisters and Susie Pascoe. This evening Alice came and thanked me. She says Nellie had already given them $25. so they were well remembered. Have written to Lizzie McLelan. (T.S.R. 56. 2 P.M. 91. S.S. 69.)

June 4. Friday. Our district school closed today. County examinations next week Received letters from Will, Ada and Alma Cooke. Our river has been running bank full for more than a week and the levees are being carefully watched. The blessings of the Protection Dist. work now appear, and are satisfactory. (T.S.R. 48. 2 P.M. 76. S.S. 63.)

1909. June 5. Saturday. Fifty-four years ago we sailed away from New York Harbor for California. Have written to the children in the East. After a consultation of physicians over Mrs. Geo. Jack's case, she has been taken to a Sacramento Hospital for treatment. Their opinion seems to be that there is some obstruction in her bowels which must be removed in order that she may recover. But it is extremely doubtful whether she will have strength to endure and operation. Yet she goes forth with remarkable faith and courage. (T.S.R. 45. 2 P.M. 82. S.S. 66.)

June 6. Sabbath. The river is running bank full yet and the levees are being carefully watched. Congregations increase in numbers and interest under Rev. Robinson's pastorate. (T.S.R. 48. 2 P.M. 87. S.S. 72.)

June 8. Tuesday. Received a letter from Theresa and wrote to Ada. A temperance lecturer, Jas. H. Woertendyke, who spoke in the M.E. church last evening called. He is working for the union of all temperance forces, Local-Option, Anti-Saloon Leauges and Prohibitionists, to get them to join in one common fight against the saloon element - a common sense way of working, of course, but the Prohibitionists especially oppose it. (T.S.R. 50. 2 P.M. 81. S.S. 65.)

June 9. Wednesday. This evening, about 8 o'clock, we were startled by the cry of fire! fire!! and men came running our way. Luther's slaughter house was burning, and a brisk breeze was blowing the flames towards the big barn and the "park" lot, thickly covered with cocks of hays not yet gathered in. But the town was full of people come to attend the Ladies Aid Entertainment in our Hall. A "bucket brigade" was quickly formed and in a very short space of time, owing to the blessing of the Lord on well-directed efforts, the fire was all extinguished. Luther's man had been trying out tallow, and left a fire in the furnace when he went home for supper. So the brisk wind blew the flames about, setting the fat on fire. As it proved, the damage is not great, but we shudder to think what the consequences might have been, had the fire started. later when people were asleep. After quite had been restored, about 9 o'clock the entertainment began with a well-filled hall. The Clements people, Charles Bryant leader, gave a drama, "The Merry Cobblers" and had one-half the door receipts. Our ladies sold ice cream and home-made candies and in all they realized more than $40. (48.) clear gain - fine! Have written to Theresa. (T.S.R. 48. 2 P.M. 86. S.S. 72.)

June 10. Thurs. Tonight there are two places where classes are meeting for Bible Study. Rev. Robinson has succeeded in organized a Young People's Bible Class and they meet at Mr. Ambrose's this eve to complete the organization - good! The older met at Laura Bruml's. (T.S.R. 56. 2 P.M. 90. S.S. 70.)