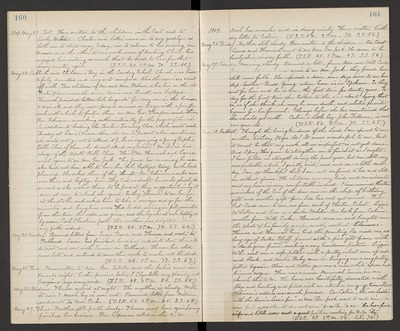 1909. May 22. Sat. Have written to the children in the East and to Locke Webster. Chester and Lottie came in to say goodbye, as both are to start away today, one to return to his mining in Nevada and the other to one week more of teaching. Chester has enjoyed his visiting so much that he dreads to leave for that dreary country again. (T.S.R. 42. 2 P.M. 70. S.S. 60.)

May 23. Sabbath and Children's Day in the Sunday School. Church was beautifully decorated and every seat occupied. Also the exercises went off well. Two children of Mr. and Mrs. Nelsen, who live on the old Foster place across the river, Annie and Bendt, were baptized. Hannah provided button-hole bouquets for every one in the house, 200 in all, and they were passed around on trays, with a pin for each, with which to fasten them on. Mrs. Geo. Thompson made them. Rev. Robinson is working enthusiastically for the progress of the school In addition to leading the Teacher-Training Class, which meets each Tuesday at Lou's (because thus she can be present when sometimes she could not go out to attend it), he is organizing a Young People's Bible Class, of those who do not attend any school. Mr. Davis has charge of the Adult Bible Class. This P.M. Hannah and Laura went again to see Mrs. Geo. Jack. They found her mourning because she had not been able to have her babe baptized today, as she had planned. She asked them if they thought Rev. Robinson would come over there and baptized him. They had no doubt he would gladly do so, and as she wished them to be present, they suggested having it done at once, to which she agreed. So they phoned to our George at the stable and asked him to take a carriage and go for the minister and bring him over. This he did, arriving in forty minutes from the time the order was given, and the boy was at once baptized by name, Carl Christian Jack. The mother was delighted. She is very feeble indeed. (T.S.R. 44. 2 P.M. 72. S.S. 62.)

May 24. Monday. Received letters from Susie Pascoe and Theresa and wrote to Portland. Susie has finished her school and is to start this wk. to visit and sew with Eunice in Portland. Theresa has sold some lots and intends to come this week to make out the deed. (T.S.R. 48. 2 P.M. 77. S.S. 67.)

May 29. Saturday. Morning cloudy. Received a letter from Ada and Will Cooke. Hannah and Laura went again to see Mrs. Jack - they found her still more feeble. She expressed a desire some days since to see her step-brother - Bredd Young - whose home is in Spokane. So they sent for him and he is here, the first time for twenty years. Today for the first time she talked to the girls about dying, that is, as if she thinks she may be near death, and selected favorite hymns for her funeral. Always before she has maintained that she should get well. Calvin's little boy - John Fillmore, is now one year old. (T.S.R. 50. 2 P.M. 71. S.S. 65.)

May 30. Sabbath. Through the loving kindness of the Lord I am spared to see another birthday - 73 yrs. old! It seems wonderful to me, but it must be that my work, all so imperfect, is not yet done. And I pray His grace to strengthen me to finish it as I ought. I have failed in strength during the past year, but am still very comfortable, while I quietly write, read and sew a little each day, I am so thankful that I am not confined to bed and still see without glasses. The children are very kind and considerate and my home is very comfortable indeed. I have received thirteen reminders of the love of the dear ones in the shape of birthday gifts, and another gift from Ida has not yet arrived. Five Post-Cards came to me. one from each Hester, Celeste, Lizzie McLellan and Dean and Locke Webster. One book from Calvin, another from Will Cooke. Howard came in and brought me the photo of his family group, mostly excellent likenesses. Theresa and Hannah have had the painting Ida made me so long ago of Scotia Bluff, framed with a fine gilt frame with a dark green frame mat, making a very handsome picture. Lizzie McL. sent me a sofa pillow with a pretty velvet cover of red and black, and Amelia Daley came in bringing one a very pretty potted begonia. Alice and Nellie gave me a nice white apron and kimons sacque. There was a union Memorial Service in our church this A.M. The house was beautifully decorated with flags and bunting and filled with an attentive congregation. Rev. Robinson's address was much praised. Our Calvin, the "we Caddie with the bonnie lassic face", as Mrs. Dr. Jack used to call him, is now forty years old, it does not seem possible to me, He has a fine wife and little son and a good position working for N.Y. City. (T.S.R. 47. 2 P.M. 84. S.S. 74.)