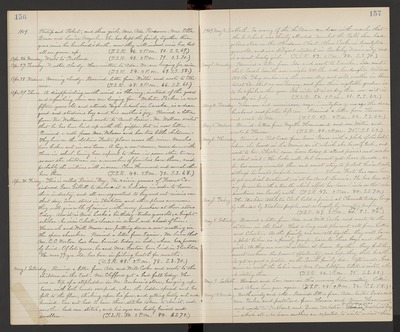 Apr. 29. Thurs. A disappointing north wind is blowing, instead of the good and refreshing rain we are longing for. Webster Parker is now fifteen years old and attends High School in Eureka, is a dear, good and studious boy and his mother's joy. Received a letter from Rev. Wallace and wrote to Aunt Susie. Mr. Wallace writes that he has been laid up with the grippe, but is now better - Received a call from Mrs. Nelsen and her two little children - They live on the old time Foster place across the river. Measles have broken out in our town. A boy, a new-comer, came down with them in school, having been exposed to them in some other town, so now the children in a number of families have them, and probably the victims will increase. Clara Hammond and several other have them. (T.S.R. 44. 2 P.M. 72. S.S. 68.)

Apr. 30. Friday. This is called Raisin Day - The raisin growers of Fresno Co. induced Gov. Gillett to declare it a holiday in order to boom their industry, and all are requested to buy and eat raisins on that day. Some stores in Stockton and other places announce they will give a lb. of raisins with every purchase at their stores today. Also it is Niel Locke's birthday - twelve years old, a bright scholar - he is in Celeste's classes in school, and ahead of him. Hannah and Will Moore are putting down a new matting in the spare chamber. Received a letter from Eunice - We learn that Mr. O.O. Norton has been buried today in Lodi, where he formerly lived. Of late years, he and Mrs. Norton have lived in Stockton. He was 77 yrs. old, has been in failing health for months. (T.S.R. 48. 2 P.M. 78. S.S. 70.)

May. 1. Saturday. Received a letter from Ada and Will Cooke and wrote to the children in the East. Mr. Clifford got a bad fall today. He was on top of a stepladder in Mr. Ambrose's store, hanging up hams, with both hands occupied, when the ladder spread and he fell to the floor, striking upon his face, and getting badly cut and bruised. One cut had to have three stitches taken to close it, and another had one stitch, and his eyes are badly bruised and swollen. (T.S.R. 50. 2 P.M. 84. S.S. 73.)

1909. May 2. Sabbath. So many of the children are down with measles that the S. School was thinly attended. None but the Bible class had golden stars on the Attendance Chart. Alma Cooke is twentytwo years old, and is a diligent student in Berkeley University and is a sweet lovely girl. (T.S.R. 53. 2 P.M. 84. S.S. 70.)

May 3. Monday. Received a letter from Ida and wrote to Eureka. Ida writes that Sarah Smith now weighs 200 lbs. and her daughter Mildred 180 lbs. They are having the same dry and cold weather in Humboldt Co. that we are having, and fear their vegetable garden is to be failure this year. Ida writes it is as dry there now as it is usually in July. (T.S.R. 50. 2 P.M. 81. S.S. 62.)

May 6. Thursday. Received a Post Card from Susie Pascoe with a photo of the hotel where she boards in La Moine on it which she herself took, and wrote to her. Chester came home today to attend picnics and make a short visit. He looks well, but cannot yet leave Nevada, as he has money invested there and must stay to protect his interests, although he would prefer to remain here - Elvira Foote has come here to get medical treatment, is at her Aunt Laura's. She has been ailing for weeks with a trouble which affects her lower limbs so that she sometimes can hardly walk. (T.S.R. 47. 2 P.M. 80. S.S. 70.)

May 8. Saturday. Received a letter from Ada and Will Cooke and wrote to the children in the East - Had a long and pleasant call from Lottie and Chester. As the family are now all together they will have a photo taken in a family group, parents, three boys and three girls. As they are now so seldom at home together, they feel they must embrace the present opportunity, and hope they shall be able to get as good a picture as the Smith family did - Afterwards, Geo. came in with the babies and Mrs. Overholtzen, Estelle's sister, who is visiting them. (T.S.R. 46. 2 P.M. 75. S.S. 62.)

May 10. Monday. North windy and cold - Received letters from Ada, Sister Susie and Mrs. Perks, and post-Card from Horace and Anna Hammond. and wrote to Portland and Dean Webster. Yesterday was "Mother's Day" in which all who have mothers are expected to write or visit them