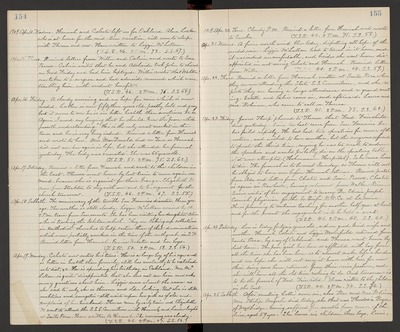 Apr. 15. Thurs. Received letters from Willie and Calvin and wrote to Sue Pascoe - Calvin writes that he and Adelaide took John to church on Good Friday and had him baptized. Willie writes that Walter was taken to a surgeon and had adenoids removed which were troubling him, with evident benefit. (T.S.R. 46. 2 P.M. 76. S.S. 68.)

Apr. 16. Friday. A cloudy morning and we hope for rain which is now needed. Luther is now fiftythree years old, partly bald and gray but it seems to me he is in better health than sometimes he is. Again I record my longing that he should know the "peace which passeth understanding". His is the only meat market in the town and he is very busy indeed. Received a letter from Hannah and wrote to her. Mrs. MacDonald died on Tues. so Hannah did not see her again in life, but she attended her funeral yesterday. The body was cremated. She was 65 years old. (T.S.R. 51. 2 P.M. 75. S.S. 62.)

Apr. 17. Saturday. Received a letter from Hannah and wrote to the children in the East. Theresa went home by last train to come again on Mond. because she is organist for their Grange. Elizabeth W. came from Stockton to stay with me and to be organist for the church tomorrow. (T.S.R. 46. 2 P.M. 67. S.S. 55.)

Apr. 18. Sabbath. The anniversary of the terrible San Francisco disaster, three yrs. ago. The weather is still cloudy- Lizzie McLellan arrived by [?] 2 P.M. train from Sacramento. She has been visiting her daughter Alice who is teaching the Isleton school. They are taking up collections in Methodist churches to help restore those of that denomination which were partially wrecked in the time of the earthquake in S.F. Received letters from Hannah, Eunice Webster and her boys. (T.S.R. 50. 2 P.M. 58. S.S. 56.)

Apr. 19. Monday. Celeste now enters his "teens". He is a large boy of his age and is better in health than formerly, still has constantly to be watched as to diet, &.c. He is spending his birthday in Oakland. Mrs. McLellan is quite disappointed that she does not see him and asks many questions about him. Lizzie seems almost the same as she used to, only she is thinner and older looking. But she is still ambitious and energetic - still waits upon her girls as of old and complains of her husband. Theresa came by early train and Elizabeth W. went to attend the S.S.S. Convention with Hannah and Loiuse Inglis at Santa Rosa. Have written to Hannah. The morning was cloudy. (T.S.R. 42. 2 P.M. 67. S.S. 56.)

Apr. 21. Wednesday. A fierce north wind blew today, dispelling, all hope of the needed rain. Lizzie McLellan had to travel in it home, and it was indeed uncomfortable, and besides she went home disappointed in not seeing Celeste and Hannah. Received letter from Willie. (T.S.R. 40. 2 P.M. 64. S.S. 59.)

Apr. 22. Thurs. Received a letter from Hannah written at Santa Rosa where they are now attending the State S.S. Convention, and she reports they are having a large attendance and a grand meeting. Estelle and babies came in, and afterwards Laura and Mrs. Robinson, who came to call on Theresa. (T.S.R. 41. 2 P.M. 73. S.S. 62.)

Apr. 23. Friday. James Thorp phoned to Theresa that Fred Fairchild died yesterday. Since he last came from San Francisco he has failed rapidly. He had had two operations for cancer of the rectum, and wished to have another, but the surgeons refused to operate the third time, saying he was too weak to endure the operation and would probably die on the operating table if it were attempted (Hahnemann Hospital). So he came home to die. The funeral is the next Sunday, so Theresa will not be obliged to leave me before Hannah returns. Received postal from Ada and letters from Chester and Susie Pascoe. Chester is again in Rawhide, having returned from Walker River. Susie writes of her engagement to marry Dr. Edwin Joseph Cornish, physician for the So. Pacific R.R.Co. at La Moine. She is planning to continue teaching for another half-year at least, and for the present the engagement is to be kept a secret. (T.S.R. 41. 2 P.M. 68. S.S. 60.)

Apr. 24. Saturday. Lou is today fortysix years old, a dear, good, kind wife and mother. Hannah, Celeste and Lizzie Westerfield returned from Santa Rosa, by way of Oakland, and Theresa went home by last train. The poor girl has been so afflicted with hay fever all the time she has been here as to almost make life a burden and we hope she will not carry it home with her, for now their dairy cows have returned from their river pasture, and she will have all the old-time cooking to do. And tomorrow is to be the funeral of Fred. Fairchild. Have written to the children in the East. (T.S.R. 44. 2 P.M. 74. S.S. 66.)

Apr. 25. Sabbath. After meeting Lottie came in, also Rev. and Mrs. Robinson. Mrs. Phillip Megerle died today, she that was Theodosia Boyce of Woodbridge, having suffered for months from cancer of the liver, aged 59 yrs - She leaves six children, three boys, Lewis,