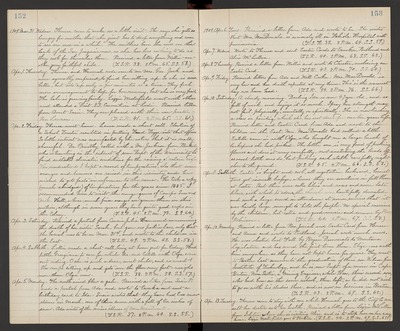 1909. Mar. 31. Wednes. Theresa came to make a little visit. She says she "gets so hungry for mother that she just has to drop everything and come to see me once in a while". The milkers have the cows on the bank of the San Joaquin now, so she has less cooking to do as they cook for themselves there. Received a letter from Willie - another very faithful child. (T.S.R. 38. 2 P.M. 65. S.S. 58.)

Apr. 1. Thursday. Theresa and Hannah rode over to see Mrs. Geo. Jack and were agreeably surprised to find her sitting up. So she is some better, but sits up only a few minutes at a time. They feel more encouragement to hope for her recovery, but she is very frail. The babe is growing finely. Lizzie Westerfield went with others and attended a Dist. S.S. Convention at Lodi. Received letter from Aunt Susie. They are pleased with their new pastor - Rev. Lawson. (T.S.R. 41. 2 P.M. 65. S.S. 61.)

Apr. 2. Friday. Theresa went home. Laura made a short call. Election of a School Trustee resulted in putting Fred Figge into that office. So little interest was manifested by the voters that it is really shameful. Dr. Priestley called with a Mr. Jackson from Berkeley who is traveling in the interest of some Dept. of the University to find suitable climatic conditions for the raising of certain crops. He understood I kept a record of temperatures, also that some oranges and lemons are raised in this vicinity and he wished to get facts in reference to the same. He took a copy (much abridged) of temperatures for the years since 1885. I recommended him to visit the orange grove of Campo Seco and Mok. Hill, where much finer oranges are grown than in this section, although in some years they have quite good crops in the Colony. (T.S.R. 45. 2 P.M. 73. S.S. 64.)

Apr. 4. Sabbath. Lottie made a short call, being at home just for today. Had little Georgiana to care for while Geo. and Estella with Olga were out riding. O she is such a dear, sweet child, and so smart. She creeps sitting up and gets over the floor very fast - weighs more than Olga now. (T.S.R. 38. 2 P.M. 58. S.S. 57.)

Apr. 5. Monday. The north wind blew a gale. Received a letter from Susie P. and a postal from Ada and wrote to Eureka and sent a birthday card to Ida - Susie writes that they have had two snow storms in March, one of them severe with a fall of ten inches of snow. Ada writes of the serious illness of Mrs. Mac Donald. (T.S.R. 37. 2 P.M. 60. S.S. 55.)

Apr. 10. Saturday. A cloudy morning. Darling Ida is now 47 yrs. old. and so full of work, and enjoys it so much. I pray her strength may not fail, physically, mentally or spiritually. She is now teaching a class in painting, which she has not done for over ten years before. Received letter and Easter Card from Ada and wrote to the children in the East. Mrs. MacDonald had rallied a little. Estelle came in with Olga, who brought me a large bunch of larkspurs she had picked. The little one is very fond of picking flowers and does it very carefully, not snatching the heads off as most little ones do, but picking each stalk carefully right close to the ground. (T.S.R. 45. 2 P.M. 66. S.S. 52.)

Apr. 11. Sabbath. Easter is bright and cool, all vegetation backward, locust tries yet is small leafage, whereas they are sometimes in full bloom at Easter. But there were calla lilies and roses and some late lilacs, with which to adorn the church was beautifully decorated and such a large crowd in the attendance at union services that it was hardly large enough to hold the people. No special exercises by the children, but extra and good music and sermon by Rev. Robinson. (T.S.R. 40. 2 P.M. 67. S.S. 58.)

Apr. 12. Monday. Received a letter from Bro. Josiah and Easter Card from Horace and Anna and wrote to Portland. Josiah wrote much news. He was elected last Fall by Bryan Democrats to Montana Legislature and has served the first term there. Eliza goes with him everywhere as they have not kept house for years. They went to Boston last summer to the graduation of their son Nelson from Institute of Technology, and he is now Supt. of a mine in Cape Boston, Nova Scotia, a Mining Engineer, while Ben, their second son, who had been in the same school, then left, as he did not wish to go on with his studies there, and is now in business in Boston. (T.S.R. 43. 2 P.M. 69. S.S. 62.)

Apr. 13. Tuesday. Theresa came to stay with me while Hannah goes to the City to consult her doctor as to her health. Received a letter from Lizzie McLellan from Isleton where she is visiting Alice and is to stop here on her way home. Lizzie Westerfield goes to Stockton. (T.S.R. 44. 2 P.M. 69. S.S. 63.)