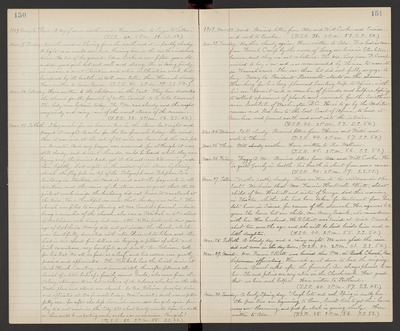 Mar. 19. Friday. Now the wind is blowing from the south and it is partly cloudy. A light rain would now be a blessing here, as the north winds have dried the top of the ground. Edna Locke is now fifteen years old - a dear, good girl but not well and strong. She is doing finely in music, a sweet Christian and active in Christian work, but hampered by ill health, is tall, even taller than Hannah already. Have written to Susie Pascoe. (T.S.R. 41. 2 P.M. 59. S.S. 50.)

Mar. 20. Saturday. Have written to the children in the East. They have decorated the church for the funeral of Mollie Condict to be held tomorrow. They body came by train today. The P.M. was cloudy and the night very windy and rainy - one of the worst storms of the season. (T.S.R. 38. 2 P.M. 56. S.S. 43.)

Mar. 21. Sabbath. I lay awake for an hour or two in the storm last night and prayed it might be calm for the two funerals today - the wind blew, it was said, at the rate of 40 miles an hour and the rain fell in torrents. And my prayer was answered, for although it was still cloudy, and distant thunder could be heard while they were laying away the precious dead, yet it did not rain till evening, and then lightly. Last night, in the midst of the storm, lightning struck the flag-pole on top of the Telegraph and Telephone Co.'s building in Stockton, shattered it and sent the fragments in all directions, and the noise of the storm was so great that the 30 girls at work inside the building did not know it was struck at the time. How thankful we were that the day was calm! The church was filled to over flowing at Mrs. Condict's funeral, as beside being a member of the church, she was a Rebekah and the eldest of 14 children, all living but one, little Kittie Jack, who died year ago of diphtheria. Many did not get inside the church, which was beautifully decorated with calla lilies, white lilacs, and the Ladies Aid spent five dollars in buying a pillow of white and pink carnations, very beautiful and sweet. Rev. Robinson took for his text, "We all do fade as a leaf", and his address was greatly praised and appreciated. The Rebekahs had the burial service at Brick Church Cemetery, and immediately thereafter followed the burial of a little babe of a family named Gould, who came from the Colony, strangers to us, but relatives of the Nelsons, who live on the old Foster place and attend our church. So Rev. Robinson preached twice and officiated at two funerals today. Mrs. Condict's death was so pitifully sad, for after she left home, she never saw her girls again, for they did not arrive in the City till about twenty minutes before her death so there could be no pasting words, as she was unconscious. Poor girls! (T.S.R. 39. 2 P.M. 55. S.S. 46.)

Mar. 23. Tuesday. Weather cloudy again. Have written to Ada. Two ladies came from French Camp by the name of Long, one lives in Stockton, however, and they are not relatives. The Mrs. Long from F. Camp wished to buy a cow and was recommended by Theresa to come to see Hannah's cows. she saw them but did not fully engage to buy. Today Ex-President Roosevelt starts on the steamer Hamburg for his long - planned hunting trip to Africa, with his son Kermit and a number of friends and helpers, hoping to collect specimens of plants and animals for the Smithsonian Institute of Washington, D.C. He is to go by the Mediterranean and Red Seas to the East Coast of Africa, to land at Mombasa, and proceed north and west into the interior. (T.S.R. 44. 2 P.M. 53. S.S 50.)

Mar. 27. Satur. Weather partly cloudy. Have written to the children in the East. We learn that Mrs. Fannie Hartwell Elliott, eldest child of Mrs. Hartwell sisters of George, died this morning in Stockton, whither she had been taken for treatment from her late home in Sissons, for cancer of the stomach. Her age was 62 years. She leaves but one child, Mrs. Mary Swank, who came down with her. Her husband, H.B. Elliott, was buried at Brick Church about ten months ago, and she will be laid beside him and a little daughter. (T.S.R. 40. 2 P.M. 55. S.S. 50.)

Mar. 29. Mond. Mrs. Fannie Elliott was buried this P.M. at Brick Church, Rev. Lopeman officiating. Hannah went down to lead the singing. Laura Bruml called after the funeral. Am always pleased to see her. She and Julius are very active in the Church work. How good that we have such helpers. Have written to Portland. (T.S.R. 40. 2 P.M. 57. S.S. 48.)

Mar. 30. Tuesday. A lovely Spring day. Though late and cool, Spring is really here. the pear trees are beginning to bloom, locust trees to get their leaves, roses are blossoming, and feed for stock is growing slowly. Have written to Ada. (T.S.R. 35. 2 P.M. 56. S.S. 53.)