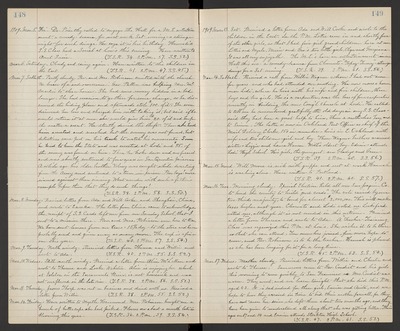 Mar. 7. Sabbath. Partly cloudy. Rev. and Mrs. Robinson united with the church. We learn of a sad occurrence: Geo. Patton was helping Mrs. McMartin to clean house. She had some money hidden in a bed lounge. She had occasion to go there for some change, so he discovered the hiding place and afterwards stole $100. of it. She soon discovered her loss and charged him with taking it, but said if he would return it at once she would give him $20. of it and keep the matter a secret. He stoutly denied the theft. Then she had him arrested and searched but the money was not found, but detectives were put on his track to watch his movements. Soon he tried to leave the State and was arrested at Lodi and $95. of the money was found on him. Then he broke down and confessed and was shortly sentenced to four years in San Quentin prison. A while ago his older brother Volney was caught while deserting from the Army and sentenced to a term in prison. Poor boys! more sinned against than sinning. What wonder with such a father's example before them that they do such things! (T.S.R. 38. 2 P.M. 58. S.S. 50)

Mar. 8. Monday. Received letters from Ada and Will Cooke, and Shanghai, China, and wrote to Eureka. The letter from china came to acknowledge the receipt of S.S. Cards left over from our Sunday School, that I sent to a mission there. Rev. and Mrs. Robinson were here to tea. We have sent lemons from our trees - 15 1/2 doz. - to the store and have probably used and given away as many more. The crop is a fine one this year. (T.S.R. 40. 2 P.M. 57. S.S. 54.)

Mar. 10. Wednes. Still north windy - Received a letter from Alice McLellan and wrote to Theresa and Locke Webster. Alice is enjoying her school at Isleton in the Sacramento River, is not homesick and was not over flowed in the late rise. (T.S.R. 38. 2 P.M. 56. S.S. 52.)

1909. Mar. 13. Sat. Received a letter from Ada and Will Cooke and wrote to the children in the East. In the P.M. Lottie came in and shortly four of the other girls, so that I have five girl grandchildren here at once Lottie and Myrle, Marie and Geo's two little girls, Olga and Georgiana. It was all very enjoyable. The M.E.'s have an entertainment in our Hall this eve - a comedy-drama from Clements - "Topsy-Turvy" - strange doings for a Sat. evening. (T.S.R. 39. 2 P.M. 61. S.S. 56.)

Mar. 14. Sabbath. Receive a call from Willie Wagner whom I had not seen for years and who had attended our meeting. He now owns a home near Lodi, where he lives with his wife and five children, three boys and two girls. He is carpenter, was the boss of four carpenters recently in building the news Cong'l Church at Lodi. He called to tell me he remembered gratefully the old days in my S.S. Class - said they had been a great help to him, then a motherless boy, and to Simon. The latter is now in Oakland Post Office as chief of the Mail Delivery Clerks, 150 in number - lives in E. Oakland with wife and two children - girl and boy. Those Wagner brothers married sisters - Lizzie and Laura Hansen. Will's oldest boy - Edwin - attends Lodi High School. His girls, the youngest, are Gladys and Grace. (T.S.R. 39. 2 P.M. 60. S.S. 56.)

Mar. 16. Tues. Morning. cloudy. Special Election held all over San Joaquin Co. to bond the country to build "good roads". The vote carried by over two-thirds majority, to bond for almost $2,000,000. This will make taxes higher next year. Clements and Lodi voted no. Lockeford voted yes, although it is not needed in the section. Received a letter from Theresa and wrote to Ada. A "Teacher - Training Class" was organized this P.M. at Lou's. She wishes it to be there so that she can attend. Ten members joined, five more hope to come, and Rev. Robinson is to be the teacher. Hannah is pleased as she has been longing for it for a long time. (T.S.R. 45. 2 P.M. 63. S.S. 54.)

Mar. 17. Wednes. Weather cloudy. Received letters from Willie and Chester and wrote to Theresa. Summons came to Geo. Condict and his girls this morning to come quickly to San Francisco as Mrs. Condict was worse. They went, and we learn tonight that she died this P.M. aged 42. It is sad indeed for those girls, Eunice and Anita, and we hope to hear they arrived in time to bid their mother farewell, for they have not seen her since she left them about two months ago, and they have been give to understand all along that she was getting better. Their ages are 17 and 14 and Eunice attends Stockton High School. (T.S.R. 47. 2 P.M. 61. S.S. 53.)