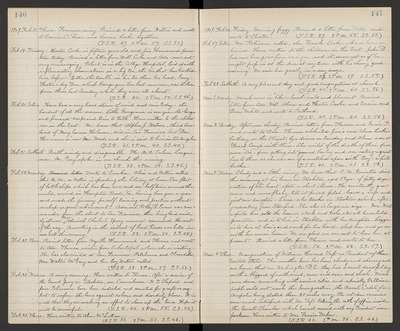 Feb. 19. Friday. Hester Cooke is fifteen years old and Jim. Hammond fourteen today. Received a letter from Will Cooke and Ada - news not very encouraging. Robert is in the College Hospital, laid up with inflammatory rheumatism in a big toe, the toe that has troubled him before. Better the trouble in his toe than his head, I say - Hester's dog Tom, which George gave her last summer, was stolen from them last Sunday while they are all absent. (T.S.R. 40. 2 P.M. 52. S.S. 46.)

Feb. 20. Satur. Have had very hard storm of wind and rain today - the hardest of all the season. Little Georgiana is one year old - large and forward - creeps and tries to talk. Have written to the children in the East. We learn that Alpha J. Watson, third husband of Mary Emma Holman, died in San Francisco last Dec. Her name is not Mrs. Woods and she is said to live in Los Angeles. (T.S.R. 41. 2 P.M. 40. S.S. 40.)

Feb. 22. Monday Wrote to Eureka. Alice and Nellie called this A.M. as Nellie is spending the holiday at home. Our fleet of battleships, which has been once and one-half times around the world, arrived in Hampton Roads, Va - having been gone a year and made the journey for self-training and practice without mishap - a great achievement! Admiral Robley D. Evans was commander from the start to San Francisco, then being laid aside by illness Rear Admiral Charles S. Sperry assumed command the rest of the way. A meeting in the interest of Good Roads was held in our hall this evening. (T.S.R. 33. 2 P.M. 50. S.S. 48.)

Feb. 23. Tues. Received letters from Myrtle Hammond and Theresa and wrote to Ada. Theresa writes from Sebastopol where she is visiting. She has also visited at San Francisco, Petaluma and Cloverdale. Mrs. Walter McGary and her boy Walter called. (T.S.R. 33. 2 P.M. 57. S.S. 52.)

Feb. 24. Wednes. A rainy morning. Have written to Theresa. After a session of the Grand Jury in Stockton, one Councilman - W.T. Shepard and four Policeman have been indicted and arrested for graft or neglect to enforce the laws against saloons and disorderly places. It is well that they are making an effort to clean up the town. Hope it will be successful. (T.S.R. 44. 2 P.M. 55. S.S. 50.)

Mar. 2. Tuesday. Afternoon cloudy. Received letters from Theresa and Susie P. and wrote to Ada. Theresa celebrated Jim's and Alma Locke's birthday on the 1st inst, by a dinner on Sunday and Alma was at French Camp with them. She writes of the death of their fine mare - "Sis" - from getting into ground barley and over-eating-a great loss to them, as she was one of the matched span with "Boy" - a full brother. (T.S.R. 40. 2 P.M. 61. S.S. 58.)

Mar. 3. Wednes. Cloudy and a little rainy. We learn that C.M. Keniston died this morning at his home in Stockton, aged 58 yrs - of fatty degeneration of the heart, after a short illness. He constantly grew more and more fleshy, till it proved fatal - leaves a wife and just one daughter - Lucia - who teaches in Stockton schools, after graduating from Stanford. She also is large in size. Mrs. Westerfield has sold the harness stock and tools, also all household furniture, and is to live in Stockton with her daughter. Lizzie is to live at Lou's and work for her board, sleep here and go on with her music lessons. We are glad we are not to lose her at present. Received a letter from Theresa and wrote to her. (T.S.R. 50. 2 P.M. 62. S.S. 57.)

Mar. 4 Thurs. Inauguration of William Howard Taft as President of these United States. The weather here has been cloudy and showery and we learn that in Washington, D.C. they had a most dreadful day with a blizzard of north wind, snow and rain and slush. Wires were down connecting with various cities, and especially Baltimore people could not reach the Inauguration, the Naval Cadets from Anapolis being stalled there, 20 miles away. The out-door exercises were much interfered with, Mr. Taft taking the oath of office inside the Senate Chamber - which has not occurred with any President since Jackson. Have written to Mrs. Fannie Weber. (T.S.R. 46. 2 P.M. 56. S.S. 48.)