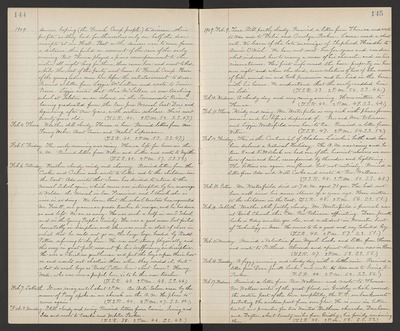 1909. dance, hoping (the French Camp people) to increase their profits, as they had for themselves only one-half the door receipts at out Hall. But as the dancers were to come from a distance, this failed on account of the rain of the early evening. But Theresa played a piano accompaniment to the violin all night long for them, then came here and went to bed while the rest of the party went home to French Camp. Four of the young ladies came here before the entertainment to dress. Received a letter from Lizzie McLellan and wrote to Susie Pascoe. Lizzie writes that Alice McLellan is now teaching school at Isleton on an island in the Sacramento River, having graduated from the San Jose Normal last Dec. and beginning after New Years, with sixteen scholars. She is now twenty years old. (T.S.R. 40. 2 P.M. 52. S.S. 47.)

Feb. 6. Saturday. Weather cloudy, windy and showery. Received letters from the Cookes and Calvin and wrote to Lottie and to the children in the East. Ada writes that Irene has decided to return to the Normal School again, which course was interrupted by her marriage to Weldon - the Normal in San Francisco, and I think she is wise in so doing. We learn that the school trustees here requested Mr. Fassett, our grammar grade teacher to resign, and he has done so and left. We are so sorry. He was such a help in our S. School and in the Young People's Society. He was a good man but failed lamentably in discipline, and there was such a state of chaos in school that he could not go on, the large boys, headed by Budd Patton, refusing to obey him. He was not strong physically and this may, in great part, account for his inefficiency in discipline. He was a Christian gentleman and put the boys upon their honor and would not chastise them when they needed it, but what do such boys as Budd Patton know about honor? Henry Wade, who has once a pupil here, is to be the new teacher. (T.S.R. 43. 2 P.M. 48. S.S. 46.)

1909. Feb. 9. Tues. Still partly cloudy. Received a letter from Theresa and wrote to Ada and to Delia and Carolyn Parker. Laura mad a short call. We learn of the late marriage of Shepherd Hindle to Annie O'Niel. We have not met her for years and wonder what induced her to marry a man of his character and in his circumstances. His first wife owned the home property in her own right and when she died, some relatives of hers of the name of Gill, moved in and took possession and he lived in the barn with his horses. We understand that the newly-wedded live in Lodi. (T.S.R. 33. 2 P.M. 52. S.S. 46.)

Feb. 12. Friday. This is the Centennial of Abraham Lincoln's birth and has bean declared a National Holiday. The A.M. was rainy and between 11 and 11:30 o'clock we had one of the heaviest showers we ever have a rain and hail, accompanied by thunder and lightning. The bottoms are again over flowed but not entirely. Received a letter from Ada and Will Cooke and wrote to Rev. Wallace. (T.S.R. 48. 2 P.M. 52. S.S. 48.)

Feb. 17. Wednes. Received a letter from Rev. Wallace and wrote to Theresa. Rev. Wallace writes of the great flood in Gridley which covered the eastern part of the town completely, the R.R. embankment protecting the western part from over flow. He is now in better health and preaches for two United Brethren churches, Durham and Dayton, about twenty miles from Gridley, his family remaining there. (T.S.R. 48. 2 P.M. 58. S.S. 53.)