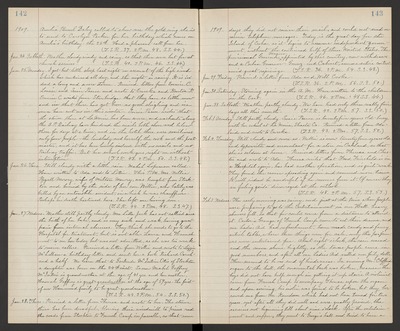 Jan. 25. Monday. I got but little sleep last night on account of the high wind which has continued all day, and the night is rainy. It is indeed a long and severe storm. Received letters from Eunice C. Louise and Susie Pascoe and wrote to Eureka and Benton P. Eunice C. writes from Sturbridge that they have so little snow and ice that there has yet been no good sleighing and ice men have cut no ice this winter. Susie Pascoe writes that the storm there at La Moine has been severe, and washouts along the S.P. Railway have hindered the mails both above and below them for days at a time, and in the hotel there were sometimes only four people - the landlady and herself, the cook and the postmaster, and it has been lonely indeed with no mails and no Railway traffic. But her school work goes right on without interruption. (T.S.R. 43. 2 P.M. 50. S.S. 48.)

Jan. 26. Tues. Still cloudy with a little rain. Mabel Lopeman called. Have written to Ada and to Lottie. This P.M. Mrs. Nellie Pygall Mowry, wife of Milton Mowry, was brought from Stockton and buried by the side of her son Willie, who lately was killed by an automobile accident, in which he was chauffeur. Perhaps his death hastened hers. She left one living son. (T.S.R. 44. 2 P.M. 48. S.S. 47.)

Jan. 27. Wednes. Weather still partly cloudy - Mrs. Lilla Jack has not rallied since the birth of her babe, and is very sick and weak, having great pain from internal abscesses. They think she needs to go to the Hospital for treatment, but is not able. Laura and Hannah went to see her today but was not admitted, as she was too weak to receive callers. Received a letter from Willie and wrote to Lizzie McLellan and birthday letter and sent her a book "Richard Carvel" - and a hdkf. We learn that to Gertrude McIntire Otis of Stockton a daughter was born on the 24th inst. So now Mabel Geffroy McIntire is grandmother at the age of 41 yrs. and her mother, Hannah Geffroy is great-grandmother at the age of 59 yrs. the first of our Hammond family to be great-grandmother. (T.S.R. 43. 2 P.M. 54. S.S. 50.)

Jan. 28. Thurs. Received a letter from Theresa and wrote to her. The storm there has been dreadful, blowing their windmill to pieces and the roads from Stockton to French Camp impassable, so that some

1909. days they did not receive their mail, and could not send or received telephone messages. Today is the great day for the Island of Cuba, as it begins to assume independent government, without the continued help of these United States. The provisional Governor, Magoon appointed by this country, now withdraws and a Cuban Governor - Gomez - and Cabinet, assume entire control amid great rejoicings. (T.S.R. 36. 2 P.M. 54. S.S. 48.)

Feb. 2. Tuesday. Still cloudy and more so. Nellie is now twentyfour years old and typewriter and accountant for a store in Oakland, so that she is seldom at home. Received letters from Theresa and Chester and wrote to Ada. Theresa writes that Fred Fairchild is in a Hospital again, has had another operation, and is quite weak. They found this cancer spreading again and removed more tissue. It will indeed be wonderful if he recovers from it. Of course they are feeling quite discouraged at the outlook (T.S.R. 48. 2 P.M. 57. S.S. 55.)

Feb. 3. Wednes. The early morning was rainy, and just at the time when people where preparing to go to the Entertainment in our Hall, heavy showers fell, so that few could come from a distance to attend it. Castoria Grange of French Camp came to act their drama, and our Ladies Aid had refreshment, home-made candy and fancy article tables, where these things were for sale, only the performers were entertained free. About eight o'clock, the rain ceased and the moon shone brightly, so the towns-people came in good numbers, and after all our Ladies Aid netted over forty dolls. There seemed to be no end of hindrances. In moving Mr. Clifford's organ to the hall, the ornamental back was broken, because the boys did not have help enough in getting it up stairs. A violinist came from French Camp to accompany Theresa upon the organ and upon arriving, his violin was found to be broken, but they borrowed one from Mr. Knudsen which had not been tuned for two years, yet after all they did well and were greatly praised, the exercises not beginning till about nine o'clock. After the entertainment and supper, they went to George's hall and tried to have a