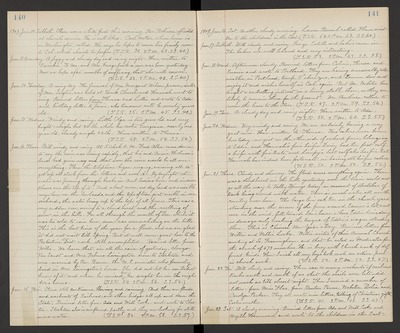 Jan. 12. Tuesday. A rainy day. The funeral of Mrs. Margaret Wilson Jensen, sister of Mrs. Inglis, was held at Brick Church and Hannah went to sing. Received letters from Theresa and Lottie and wrote to Ada and birthday letter to Sister Susie, who tomorrow will be seventy years old. (T.S.R. 35. 2 P.M. 45. S.S. 42.)

Jan. 14. Thurs. Still windy and rainy. At 5 o'clock A.M. Fred Allen came down to say the river was rising rapidly, that his and Annie Holman's levees had given way and that soon the river would be all over everything. Then the telephone began ringing, warning all together up all stock from the bottoms and wood, &.c. By daylight the water was pouring through breaks in Aunt Susie's levee and in some places over the top of it. And about noon, no dry land was visible anywhere on the lowlands, and the tops of trees just visible in our orchard, the water being up to the tops of all fences. This was a very sudden rise, owing to a cloud burst and the melting of snow in the hills. For all through the month of Dec. while it was too cold to rain here, snow was accumulating on the hills. This is the best time of the year for a flood, and we are glad it did not wait till Spring. But it will cause great loss to the Protection Dist, work, still uncompleted. Received letter from Willie. We learn that, in all the rain of yesterday, Alonzo Van Sandt and Mrs. Rebecca Livingston drove to Stockton and were married by Rev. Brown, the M.E. minister who formerly lived in Mrs. Livingston's house. She did not let her son Robert know of it, and when he missed her, he sought her in the neighbor's houses. (T.S.R. 54. 2 P.M. 56. S.S. 56.)

Jan. 15. Fri. Storm still continues, blowing and raining. And there are floods and washouts of Railroad and other bridges all up and down the State. Received letter from Ada and Will Cooke and wrote to Chester. Stockton also over flowed partly and they are looking for still more water. (T.S.R. 54. 2 P.M. 58. S.S. 57.)

Jan. 18. Mond. Afternoon cloudy. Received letters from Calvin, Theresa and Eunice and wrote to Portland. They are having unusually cold weather in Portland, temp. 5- above zero, and Eunice does not enjoy it and wishes herself in Cal. again. But Mr. Webster has bought a controlling interest in a livery stable there, so they are likely to remain there for the present. Mr. Ambrose called to renew the lease to the Store. (T.S.R. 47. 2 P.M. 59. S.S. 54.)

Jan. 20. Wednes. Very windy and rainy. we are certainly having a very great rain. Have written to Theresa. Two calves were born here today - one just on the other side of orchard fence, belonging to Eddie, and Hannah's fine heifer Daisy had her first calf, a heifer with five teats, and Limpy's last calf also has five teats Hannah has indeed been fortunate in having all heifer calves. (T.S.R. 50. 2 P.M. 52. S.S. 52.)

Jan. 21. Thurs. Cloudy and showery. The flood covers everything again. There was a cloud burst in the hills yesterday and the train could not go all the way to Valley Springs today on account of stretches of tract being covered with water. There is much water all over the country near here. The large live oak tree in the church yard standing near the corner of the fence around Eunice's lot, went over in the wind, fell towards Ida's house where Eddie lives, doing no damage only breaking the tongue of Eddie's wagon standing there. This is Chinese New Year's Day. Received letters from Willie and Nellie Locke. Willie writes of their Annual Church meeting at So. Framingham, and that he acted as Moderator for the church of 473 members. He is busy with Church work of different kinds. How I wish all my boys took such an active part in church work. (T.S.R. 52. 2 P.M. 52. S.S. 47.)

Jan. 22. Fri. Still cloudy and rainy. There are so many washouts of railroad tracts north and south of us that the mails were late - did not reach us till almost night. Then I received a number of letters - from Miss Flaa, from Benton Pascoe, Webster, Delia and Carolyn Parker. They all wrote nice letters, telling of Christmas gifts. Cooler weather. (T.S.R. 41. 2 P.M. 48. S.S. 43.)

Jan. 23. Sat. A cloudy morning. Received letters from Ada and Will Cooke and Myrtle Hammond and wrote to the children in the East.