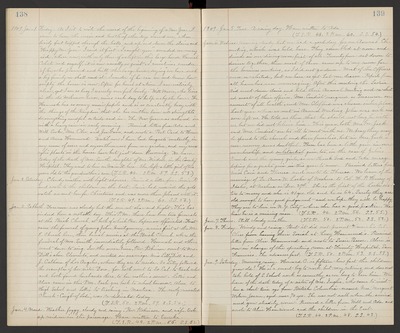 1909. Jan. 1. Friday. As I sit to write the record of the beginning of a New Year, I seem to her the noise and bustle "of other days around me", when lively feet tripped through the halls and up and down the stairs and "Happy New Year" - "I said it first" - "I caught you" - sounded on every side, where now with only three of us left in this large house, Hannah. Celeste and myself, it is now usually so quiet. I sometimes wonder if he, who planned and built this large house, saying "we have such a big family we shall need it" - I wonder if he can see and know how empty the house is now. Often for hours at a time, I am entirely alone, yet I am so busy I scarcely ever feel lonely. Will Moore, who lives in the old Mohrmon house, comes each day to help us by the hour. For Hannah has so many music pupils and is so constantly busy with "the things of the Kingdom" that she has neither time nor strength to do everything needful, outside and in. The New Year was ushered in with a heavy rain in early morning. Received letters from Ada and Will Cooke, Mrs. Ober and Jee Gam, and wrote a Post Card to Horace and Anna Hammond. Until now I have had bouquets constantly in my room of roses and crysanthemums from our garden, and my amarylis plants in the house have but just done blooming. We learn today of the death of Mrs. Smith, daughter of Mrs. Wisdom, in the County Hospital. They used to live on Main St. here. She left a little girl of two years old to grandmother's care. (T.S.R. 44. 2 P.M. 59. S.S. 53.)

Jan. 2. Saturday. Cloudy weather with light showers. Received a letter from Susie P. And wrote to the children in the East, Susie had received the gold watch we sent her for Christmas and was more than pleased with it. (T.S.R. 49. 2 P.M. 60. S.S. 56.)

Jan. 3. Sabbath. Forenoon was cloudy but the sunset clear and bright. This has indeed been a notable day. This P.M. there have been two funerals at the Brick Church, at both of which Rev. Lopeman officiated. First came at the funeral of young John Montgomery, services first at the M. E. Church here, then burial services at the Brick Church, where the funeral of Mrs. Smith immediately followed. Hannah and others went down to sing. In the mean time, Rev. Robinson went to Mrs. Dill's above Clements, and united in marriage Miss Lilly Dill and J. Calhoun of Los Angeles, where they are to reside. So Lilly followed the example of her sister Dora, for both went to So. Cal. to teach school and both found husbands there, to her mother's sorrow. Lottie and Alma came in this P.M. Each goes back to school tomorrow, Alma to High School and Lottie to teaching in Manteca. The newly-renovated Church - Cong'l - of Lodi, was re-dedicated today. (T.S.R. 50. 2 P.M. 59. S.S. 54.)

Jan. 6. Wednes. Morning cloudy but we had a good day for our Annual Ch. meeting, which was held here. They assembled at noon and dined in our dining room first of all. Twenty four sat down to dinner together, then most of them came up to my room for the business meeting, so I did not go down. Most of the Officers were re-elected, but we have as yet but one deacon. Reports from all branches were encouraging. After this meeting, the Ladies Aid went down stairs and held their Annual Meeting and re-elected most of their officers. Mrs. Condict resigned as treasurer on account of ill health, and Mrs. Clifford was chosen in her place. Last year when we met Annual Meeting John was sick and soon left us. He told us then that he should not long be with us, but we did not believe him. This year, both Mrs. Geo. Jack and Mrs. Condict are too ill to meet with us. We pray they may be spared to the church and their families, but in Mrs. Jack's case, recovery seems doubtful. Then has been a little again in our membership, and substantial gain, too, in the case of Julius Bruml and the young girls, so we thank God and take courage hoping for a greater gain in this year to come. Received letters from Miss Cain and Theresa and wrote to Theresa. We learn of the marriage of Dr. Anna W. Locke of Nashua to Col. H.P. Henry of Idaho, at Nashua on Dec. 29th. She is the first of the Locke sisters to marry and she is 41 yrs. old and he is 64. Surely they are old enough to have good judgment and we hope they will be happy. They are to live in N.Y. City where she has a good practice. We hear he is a mining man. (T.S.R. 46. 2 P.M. 56. S.S. 55.)

Jan. 8. Friday. Windy and rainy. But it did not prevent Hannah's S.S. Class from having their Social at Lucy Hammond's. Received letter from Alice Hammond and wrote to Susie Pascoe. Alice is now in charge of the operating room at Trinity Hospital, San Francisco. She advances fast. (T.S.R. 50. 2 P.M. 53. S.S. 53.)

Jan. 9. Saturday. Morning rainy. Howard C. is fifteen - how fast the children grow old! He is a smart boy to work, but very retiring and does not take hold of S. School work as earnestly as we long to have him. We learn of the death today of a sister of Mrs. Inglis, who came to visit her a short time ago from British Columbia - named Mrs. Margaret Wilson Jensen, aged near 70 yrs. She was not well when she arrived and grew steadily worse. Received a letter from Will and Ada and wrote to Alice Hammond and the children in the East. (T.S.R. 44. 2 P.M. 48. S.S. 43.)