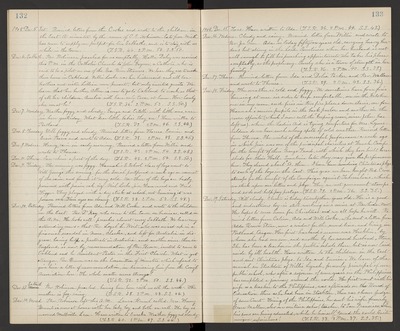 Dec. 6. Sabbath. Robinson preached for us acceptably. Hattie Daley was married this P.M. in the Catholic Church to John Gayner, a Catholic, who is said to be a pilot on one of the Sac. River Steamers, We hear they are to make their home in Oakland. Nellie Locke was her bridesmaid and all her brothers and sisters Lillian were present, but only invited guests. We learn that her brother Allen is now to go to Oakland to work, as that of all her children, Amelia will have only Oscar at home. How lonely she must be! (T.S.R. 36. 2 P.M. 52. S.S. 50.)

Dec. 11. Friday. The morning was foggy. Hannah's S. School class for boys went to Will Young's this evening, for the Social postponed a week ago on account of the rain, and found it very cold. Now three of the boys are badly poisoned with poison oak, viz:- Niel Locke, Jim Hammond and Fred Figge. They played with a dry stick at school, not knowing it was poison oak. Their eyes are closing. (T.S.R. 38. 2 P.M. 52. S.S. 48.)

Dec. 12. Saturday. Received letters from Ada and Will Cooke and wrote to the children in the East. Rev. De Kay, who came to the town on business, called in the A.M. He looks well-preaches almost every Sabbath. We hear very astounding news - that Rev. Loyal L. Wirt, who was mixed up in a financial scandal in Nome, Alaska, and left for Australia in disgrace, having help a pastorate in Australia, and another since then in England, is now, by recommendation of Rev. Brown, invited to come to Oakland and be assistant Pastor in the First Church. What is yet stranger, Rev. Brown was on the Committee of Ministers, which refused to give him a letter of recommendation, in dismissing him from the Cong'l Association here. The whole matter seems strange! (T.S.R. 32. 2 P.M. 50. S.S. 46.)

Dec 16. Wednes. Cloudy and rainy. Received letter from Willie and wrote to Rev. Jee Gam. Ada is today fiftyone years old, carrying heavy burdens but strong in the Lord. Sometimes when her husband is not well enough to fill his preaching appointments she takes his place acceptably, so the people say. Surely she is a "tower of strength" in her family. (T.S.R. 36. 2 P.M. 40. S.S. 39.)

Dec. 18. Friday. The weather is cold and foggy. We sometimes have four fires burning at once in order to keep comfortable, one in the kitchen one in my room, and fires in two fire places down stairs, one for Hannah's music pupils in the back parlor and another in the room opposite (which I now call the "keeping room" since John has left us), where the Ladies Aid is tying comforters for Mrs. Lyons. Seldom do we have such a long spell of cold weather. Received letter from Theresa. She writes of the successful performance a week ago in which Jim was one of the principal characters at French Camp for the benefit of their Grange Fund, with which they have built horse sheds for their Hall. Sometime later they may give the performance here. They cleared about $50. there - I have been sending Christmas pkgs. to each of the boys in the East. This year we have bought Red Cross stamps for the benefit of the Campaign against Tuberculosis, which we stick upon our letters and pkgs. They are not government stamps and so do not help pay postage. (T.S.R. 29. 2 P.M. 36. S.S. 35.)

Dec. 19. Saturday. Still cloudy. Chester is today twentythree years old. He is a good and industrious boy - is still working in a mine at Rawhide, Nev. He hopes to come home for Christmas and we all hope he will. Received letters from Calvin, Ada and Will Cooke, who sent a letter from Adda Brown Stone, now a widow for the second time, and living in Portland, Oregon. Her first husband's name was Hicklin, by whom she had one son, and another by her second husband, Stone. She has been a teacher in the public schools there, but is now laid aside by ill health. Have written to the children in the East and sent Christmas pkgs. to Ida and Eunice. We learn of the arrival in Stockton of Willis Lynch, formerly principal of our public school, who after a sojourn of some years in the Philippines has completed a journey around the world. Her first went with his wife as a teacher to the Philippines, was afterwards on the Board of Education there as he had been in Stockton, then was chosen Judge of some Court. Tiring of the Philippines, he sent his wife, formerly Grace Mallon, also our one time school teacher, to San Francisco, where his sons are being educated, while he himself toured the world. Quite unique experiences! (T.S.R. 33. 2 P.M. 37. S.S. 35.)