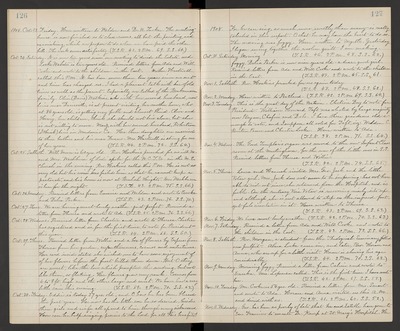 Oct. 24. Saturday. It is now ten years since our meeting to divide the Estate, and Locke Webster is ten years old. Received letters from Ada and Will Cooke and wrote to the children in the East. Mother Hartwell called this P.M. It has been more than ten years since we met and time has changed us. I had a pleasant talk with her of old times as well as the present. Especially we talked of the Brakeman family. Olive (Davis) Watkins, who with her second husband, now lives near Davisville, is at present visiting her another here, who at 86 years old, is getting very feeble and almost blind. Olive and Henry, her children, think she should not live alone, but she is not willing to move. Mary, with her second husband, Robertson (I think) lives in Mendocino Co. Her three daughters are married To three brothers and lives near Fresno. Mrs. Hartwell is strong for one of her years. (T.S.R. 44. 2 P.M. 72. S.S. 64.)

Oct. 29. Thurs. Received letter from Willie and a box of flowers by Express from Theresa from her garden, chrysanthemums, cosmos and nasturtiums. Her card inside stated she wished me to have some enjoyment of of her flowers before the frost killed them down. But O they are sweet, like the love which prompted the sending, but not like them, so fleeting. Her flowers grow very rank. Cosmos from 6 to 8 ft. high and the others large and sweet. We have had a very little rain this evening. (T.S.R. 39. 2 P.M. 70. S.S. 62.)

Oct. 30. Friday. Eddie is today 37 yrs. old, and O how he has been blessed the past year. He now has the little son he so desired, besides three girls and wife all spaced to him through many sicknesses. How can be help singing praises to the Lord for all His benefits!

Nov. 3. Tuesday. This is the great day of the Nation. Election Day to vote for President. William Howard Taft was elected by large majority over Bryan, Chafin and Debs. I have three grandsons old enough to vote, and I suppose all voted for Taft, viz: Weldon C. Benton Pascoe and Chester Locke. Have written to Ada. (T.S.R. 38. 2 P.M. 71. S.S. 64.)

Nov. 5. Thurs. Laura and Hannah visited Mrs. Geo. Jack and the little Votaw girl. Mrs. Jack does not seem to be improving - has not been able to ride out since she returned from the Hospital, and is feeble. On the contrary Vira Votaw is recovering nicely, sits up, and although she is not allowed to step on the injured foot, yet feels circulation in it. Have written to Theresa. (T.S.R. 43. 2 P.M 69. S.S. 63.)

Nov. 11. Wednesday. Geo has been so poorly of late that he and Estelle have gone to San Francisco to consult Dr. Knorp at St. Mary's Hospital. He