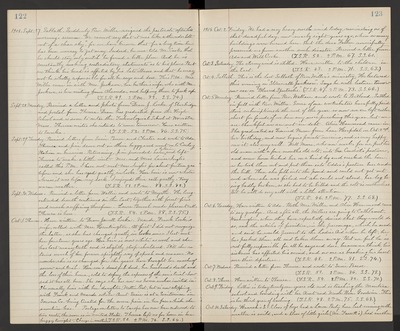 1908. Sept. 27. Sabbath. Suddenly Rev. Miller resigned that pastorate after his morning's sermon. We cannot say that it was "like a thunder bolt out of a clear sky", for we have known that for a long time he has been uneasy to get away. Indeed, he once told Mr. Cooke that he should stay only until he found a better place. And he is constantly making contradictory statements as to his plans. But we think his head is affected by his late illness and that he may not be wholly responsible for all he says and does. This P.M. Mrs. Miller came in with Mrs. Jackson, her brother's wife, who with Mr. Jackson, is here visiting from Alameda, and helping them to pack up. (T.S.R. 49. 2 P.M. 82. S.S. 74.)

Sept. 28. Monday. Received a letter and photo from Dean J. Locke of Sturbridge and postal from Theresa. Dean has graduated from the High School and is soon to enter the Technological School at Worcester Mass. Theresa writes she intends to come tomorrow. Have written to Eureka. (T.S.R. 52. 2 P.M. 86. S.S. 75.)

Sept. 29. Tuesday. Received letters from Susie Pascoe and Chester and wrote to Ada. Theresa and Jim drove out in the buggy and went on to Conley Station on business. Returning, Jim proceeded home by train and left Theresa to make a little visit. Mrs. and Miss Louise Inglis called this P.M. I have not met Mrs. Inglis for about fourteen yrs. before and she has aged greatly in looks. Her hair is now white whereas it was before very dark. I enjoyed their call greatly. Very warm weather. (T.S.R. 51. 2 P.M. 88. S.S. 82.)

Sept. 30. Wednes. Received a letter from Willie and wrote to Myrtle. The long- extended drouth continues in the East, together with forest fires and much suffering therefrom - Laura Bruml made pleasant call. Theresa is here. (T.S.R. 54. 2 P.M. 88. S.S. 75.)

Oct. 1. Thurs. Have written to Dean Jewett Locke. Maude, Frank Locke's wife, called with Mrs. Huntington. At first I did not recognize the latter, as she has changed greatly in look since I last met her fourteen years ago. Her hair is now white as wool and she has lost many teeth and is slightly stoop-shouldered. Still she retains much of her former sprightly way of speech and manner. No wonder she is so changed, for the years have brought her much of sorrow and trial. Her son's dreadful deed, her husband's death and the loss of their home, sold to defray the expenses of the son's trial - how sad it has all been. She says she has now no home "unless invited in". She usually lives with her daughter, Nettie Post, but is now stopping with Frank and Maude while Aunt Susie is at a Sanitarium in Sonoma Co. being treated for the severe pain in her face which she sometime has. Postage on letters to Europe has now been reduced to two cents, the same as in United States. Theresa left us for home in her buggy tonight. Change in weather. (T.S.R. 50. 2 P.M. 76. S.S. 64.)

1908. Oct. 2. Friday. We had a very heavy north wind today, reminding us of that dreadful day, now nearly eight years ago, where so many buildings were burned here. But the dear Father mercifully preserved us from another such disaster. Received a letter from Ada and Will Cooke. (T.S.R. 52. 2 P.M. 67. S.S. 60.)

Oct. 5. Monday. Received letter from Rev. Wallace and wrote to Portland. Settled in full with Rev. Miller. Some of our contributors have fully paid their subscriptions to the end of the year, so now we are left rather short for friends, if we have any more preaching this year, but we are thankful we are not in debt. Alice Hammond came in. She graduated as Trained Nurse from Lane Hospital on Oct. 2nd, her birthday, and now begins private nursing, and is very happy over it, also very well. Will Moore, who now works for us, put his old man with a four months old cold, into Geo. Condict's pasture, and some horse kicked her on a hind leg and cracked the bone, so he took them out and put them into Eddie's pasture here under the hill. Then she fell into the pond and could not get out and when she was fished out she could not stand, her leg being badly broken, so she had to be killed and the colt is motherless. But he will do very well with a little attention. (T.S.R. 46. 2 P.M 77. S.S. 68.)

Oct. 6. Have written to Ada. Both Mrs. Miller and Alice Hammond came to say goodbye. And after all, the Millers are going to Cathlamet, Washington, when they have repeatedly denied that they would do so, and the articles of furniture in the parsonage, which he made and said he would present to the Ladies Aid when he left, he has packed them all and taken them away. But we feel he is not fully responsible for all he says and does, because we think his sickness has affected his mind, and no one is breaking his heart over their departure. (T.S.R. 48. 2 P.M. 81. S.S. 74.)

Oct. 10. Saturday. Hannah's S.S. Class of boys had a Lawn Party here last evening as the weather is mild, and a Class of little girls. (Mr. Fassett's). had another