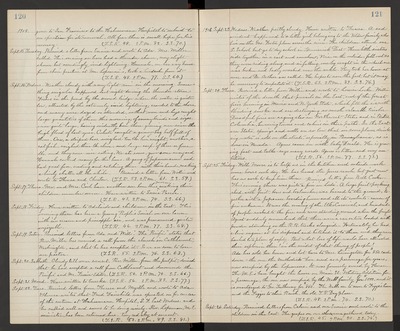 Sept. 15. Tuesday. Received a letter from Eunice and wrote to Ada. Mrs. Miller called. This evening we have had a thunder shower, very slight shower but exceedingly vivid lightning. Hannah, on her way home from choir practice at Mr. Lopeman's, took a headache from it. (T.S.R. 48. 2 P.M. 77. S.S. 64.)

Sept. 16. Wednes. Weather cloudy with a very light rain in the morning. Something singular happened last night during the thunder storm. Fishes in the pond by the second bridge where the water is quite low, attracted by the extremely vivid lightning, crowded to the shore and many were dazed or stranded, so that men and boys caught large quantities of them this morning, of many kinds and sizes, some quite large, having evidently been there growing ever since the high flood of last year. Celeste caught a gunny-bag half full of them. One, a striped bass, weighed ten lbs. live weight, another, a catfish, weighed three lbs. alive, and large carp of three or four lbs. and they were nice eating. We ate some, gave some away and Hannah cooked many for the hens. A gang of Japanese came and had great fun, wading and catching them with their hands, making a lively chatter all the while. Received a letter from Willie and wrote to Theresa and Chester. (T.S.R. 53. 2 P.M. 61. S.S. 59.)

Sept. 18. Friday. Have written to Adelaide and children in the East. This evening there has been a Young People's Social on our lawn with ice cream and pineapple ice, and was pronounced quite enjoyable. (T.S.R. 46. 2 P.M 77. S.S. 68.)

Sept. 22. Tues. Received letters from Theresa and Myrtle and wrote to Ada. Theresa writes that Fred Fairchild was operated on for cancer of the rectum at Hahnemann Hospital, S.F. last Wednes. and he rallied well and seems to be doing nicely. Rev. Lopeman, M.E. minister, has been returned here. Very red sky at sunset. (T.S.R. 53. 2 P.M. 89. S.S. 81.)

1908. Sept. 23. Wednes. Weather partly cloudy. Have written to Theresa. A sad accident happened to a little girl belonging to the Votaw family who live on the Geo. Foster place across the river. The children attend our S. School but go today school in Brunswick Dist. Three little sisters ride together in a cart and somehow, Vira, on the outside, fell out as they were riding along, and in falling, one leg caught in the wheel and was broken and badly mashed near the ankle. They took her home at once and Dr. Arthur was called. He hopes to save the food, but it may be necessary to amputate it. (T.S.R. 63. 2 P.M. 83. S.S. 76.)

Sept. 24. Thurs. Received a letter from Willie and wrote to Louise Locke. Willie writes of the drouth that prevails in the East, and of the forest fire's burning in Maine and N. York State, which fill the air with blinding smoke and are destroying so much valuable timber. Dreadful fires are raging also in Northwest States and in British Columbia, burning towns and cabins in their paths. In the Eastern States, springs and wells are so law that in some place, drinking water is sold on the streets, especially in Pennsylvania, as is done in Nevada. Agnes came in with baby Donald. He is growing fast and talks - says many words. Agnes is better and very ambitious. (T.S.R. 56. 2 P.M. 77. S.S. 73.)

Sept. 25. Friday. Will Moore is to help us in the kitchen and outside work some hours each day. He has leased the Jones ranch but just now has no work to keep him there. Received letter from Will Cooke. This evening there was quite a fire in Lodi. A large fruit packing shed, with fruit, boxes and box lumber, was burned to the ground, together with a Japanese boarding house and all its contents cause of fire unknown. It was the evening of the Elko Carnival, and hundreds of people rushed to the fire and were standing around when the freight Agent suddenly remembered that there were a car or two loaded with powder standing on the R.R. tracks alongside. Fortunately he had a live engine at his disposal and hitched it to them and they were hauled to a place of safety. But what loss of life would have attended their explosion there! in the midst of that throng of people! Ada has sold her house and lot here to Mrs. Livingston for $850. cash down - the one the Methodists have used as a parsonage for years, now occupied by the Lopemans. It was formerly owned by Horace. The M.E.'s have bought the house on Main St. - Whitney Addition for a parsonage, the one now occupied by the Webb family for $1000. and it is mortgaged to Geo. Tutheway for $850. The Webbs are to move to Figge's house and the Figges to their Ranch, the old T.B. Day place. (T.S.R. 48. 2 P.M. 74. S.S. 70.)