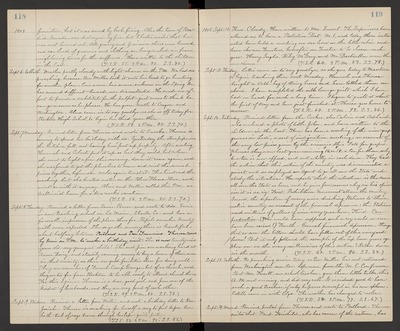 1908. furniture, but it was saved by back firing. Also the town of Raw hide, Nevada, was destroyed by fire, but Chester writes that he was not burned out. All grocery and provision stores were burned and car-loads of groceries and clothing are being rushed in from neighboring towns for the sufferers. Have written to the children in the East. (T.S.R. 55. 2 P.M. 92. S.S. 80.)

Sept. 6. Sabbath. Weather partly cloudy with light showers in the P.M. We had no preaching, because Rev. Miller took it into his head to go hunting for another place. Ever since his severe sickness in the Spring he has seemed different towards us - discontented. He made no effort to provide a substitute for the pulpit - just seems to think he can go or come as he pleases. He has gone North to Oregon and Washington. Alma came in to say goodbye as she is off today for Stockton High School, to begin her third year there. (T.S.R. 58. 2 P.M. 80. S.S. 70.)

Sept. 7. Monday. Received letter from Theresa and wrote to Eureka. Theresa is coming to spend her birthday with us. Yesterday the stove pipe in the kitchen fell, not having been put up properly. After meeting Hannah and Celeste put it up as best they could, but when she went to light a fire this morning, down it came again, and she was forced to get the plumbers to come and rivet the several pieces together, before she could again trust it. This hindered the washing, but she heated water on the Blue Flame Stove, and went on with it anyway. Alice and Nellie called this P.M. as Nellie is at home for a two weeks vacation. (T.S.R. 56. 2 P.M 80. S.S. 70.)

Sept. 8. Tuesday. Received a letter from Susie Pascoe and wrote to Ada. Susie is now teaching school in La Moine, Shasta Co. and has a favorable impression of the place thus far. Pupils number twenty with more expected. She says the scenery there is beautiful, about halfway between Portland and San Francisco. Theresa came by train in P.M. to make a birthday visit. She is now twenty nine years old - my youngest child! She and Jim are working hard at Acme Dairy, and steadily earning money to buy a home of their own in that vicinity, as there are good facilities there for doing well. They are members of French Camp Grange, but of no church, and they are too far from Stockton to be able easily to attend church there. For this I grieve. Theresa is a dear, good girl, and Jim one of the kindest of husbands, and they are very fond of each other. (T.S.R. 49. 2 P.M. 84. S.S. 78.)

1908. Sept. 10. Thurs. Cloudy. Have written to Mrs. Smart. The Supervisors have allowed us to have a Protection Dist. No. 1, and today those interested have held a meeting on our levee in the little cabin and have chosen Trustees, hereafter one Trustee to the chosen each year. Harry Inglis, Riley McGary and Mr. Dactweller were the ones chosen. (T.S.R. 64. 2 P.M. 83. S.S. 78.)

Sept. 11. Friday. Lottie came in to say goodbye, as she goes today to Manteca to begin teaching there next Monday. Hannah and Theresa bought a 50 lb. bag of string beans and have battled them on shores. I have completed the silk lounge quilt which I have had on hand for such a long time. I began to quilt it about the first of May and have just finished it. Theresa goes home tomorrow. (T.S.R. 64. 2 P.M. 93. S.S. 86.)

Sept. 12. Saturday. Received letters from the Cookes, also Calvin Adelaide who enclosed a photo of little John, and have written to the children in the East. There has been a meeting of the wine grape growers in Lodi, a sort of indignation meeting, on account of the very low prices given by the wineries this Fall for grapes. Whereas they were last year receiving $16. or $18. a ton for them, only $6. a ton in new offered, and not wholly in cash down. They had the notion that this section of the country was discriminated against, and so employed an Agent to go all over the State and study the situation. He reports that the situation is the same all over the State as here, and he gives four reasons why in his opinion it is so, viz: First, Prohibition Movement all over the country. Second, the departure of many wine-drinking Italians to their native country an accident of the financial depression! the Italiano used millions of gallons of wine every year here. Third - Overproduction. (Who would have supposed such a cry would so soon have been raised!) Fourth - General financial depression. Strange that so soon the bottom should have fallen out of this vineyard boom! But it only followed the example of the hop boom years ago. Where now are the many millionaires of this section? Rather down in the month. (T.S.R. 62. 2 P.M. S.S. 82.)

Sept. 13. Sabbath. No preaching service today as Rev. Miller has not returned from Washington nor Rev. Lopeman from the M.E. Conference. But Mr. Fassett, our school-teacher, gave them little talks this A.M. and evening, and did very well. It is indeed good to have such a good teacher, if only he proves successful in his own sphere. Estelle came in with Olga. The weather has changed to cooler. (T.S.R. 54. 2 P.M. 77. S.S. 67.)

Sept. 14. Mond. Received postal from Theresa and wrote to Portland. Theresa writes that Fred. Fairchild, who has cancer of the rectum, has