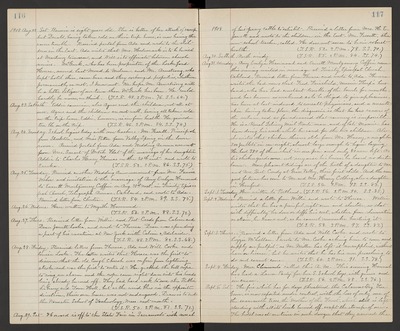 1908. Aug. 22. Sat. Bernice is eight years old. She is better of her attack of croup but Donald, having taken cold on their trip home, is now having the same trouble. Received postal from Ada and wrote to the children in the East - Ada writes that Mrs. Hidemark is to be buried at Martinez tomorrow, and Will is to officiate between church services. McGurk, who has been proprietor of the Lockeford House, moved last Mond. to Melrose, and Mr. Armstrong, who kept hotel there, came here and they exchanged properties, whether permanently or not, I know not. We hope Mr. Armstrong will be a bitter citizen of our town than McGurk has been . He could hardly be worse, we think. (T.S.R. 48. 2 P.M. 76. S.S. 64.)

Aug. 24. Monday. School begins today with new teachers - Mr. Fassett, Principal, from Stockton, and Miss Patter from Valley Spring in the lower room. Received postal from Ada and Wedding Announcement from Mrs. Smart of Dutch Flat of the marriage of her daughter Addie to Charles Henry Thomas on the 20th inst. and wrote to Eureka. (T.S.R. 52. 2 P.M. 86. S.S. 75.)

Aug. 28. Friday. Received letters from Theresa, Ada and Will Cooke and Louise Locke. The latter writes that Horace was the first to discover that the old Cong'l Church was on fire from lightning stroke and was the first to enter it. He grabbed the bell rope to ring an alarm and the rope came right down into his hands being already burned off. They had hard work to save the Public Library and Town Hall, but as the wind blew in the opposite direction, their own house was not endangered. Draw is to enter the Worcester School of Technology, Mass. next month. (T.S.R. 50. 2 P.M 81. S.S. 71.)

Aug. 29. Sat. Harvard is off to the State Fair in Sacramento with several

Aug. 31. Monday. Amy Evelyn Hammond and Everett Montgomery Coffin were this evening united in marriage at Trinity Episcopal Church, Oakland. Received letter from Theresa and wrote to Ada. Theresa writes the bad news that Fred Fairchild, Mamie Thorp's husband, who has had constant trouble of the bowels for months, and has become so weakened as to be obliged to give up business, has been at last induced to consult physicians, and a consultation having taken place, the diagnosis is that he has cancer of the rectum and so far advanced that recovery is impossible. He is a Rural Delivery Mail Route man, and of late Mamie has been doing his work while he cared for the two children. Also she writes that chicken thieves stole from Mr. Haney, a neighbor 300 pullets in one night, almost large enough to begin laying. He had 380 of them shut in one pen and only 80 were left. As his chicken yards were not very near his house, he heard no disturbance. More pleasant tidings are of the birth of a daughter to Mr. and Mrs. Bert Condy at Grass Valley, their first child. And the same good fortune has come to Mr. and Mrs. Henry Colberg, also a daughter in Hanford. (T.S.R. 56. 2 P.M. 93. S.S. 83.)

Sept. 2. Wednes. Received a letter from Willie and wrote to Theresa. Willie writes that he has a painful right arm and shoulder, so that with difficulty he dons or doffs his coat, whether from rheumatism or strain, he knows not, as he cannot remember hurting it. (T.S.R. 58. 2 P.M. 97. S.S. 83.)

Sept. 3. Thurs. Received a letter from Ada and Will Cooke and wrote to Lizzie McLellan. I wrote to Mr. Cooke asking him to come and supply our pulpit, as Mr. Miller has left it unsupplied, without "leave or license", but he writes that he has his own preaching to do and cannot come. (T.S.R. 60. 2 P.M 91. S.S. 78.)

Sept. 5. Sat. The fire which has for days threatened the Calaveras Big Tree Grove, is now reported under control, with the loss of only one of the mammoth trees, the "Mother of the Forest", which still is left standing with all its limbs burned off, except the stump of one. The hotel was at one time in such danger that they removed the