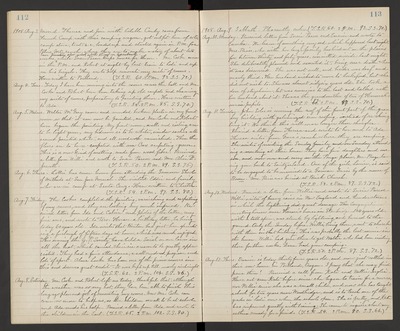 1908. Aug. 3. Mond. Theresa and Jim with Estelle Condy came from French Camp with their camping wagon, got outfit here of cots, camp stove, tent, &.c. loaded up and started again in P.M. for Blue Mt. ranch, where they are to make a stay of about two weeks, Sam Hunter also went with them on horseback while Susie Pascoe keeps house for them. Mr. Cooke came in the P.M. and Robert at night by last train to Lodi and up on his bicycle. They are to help renovate my suite of rooms. Have written to Portland. (T.S.R. 60. 2 P.M. 92. S.S. 72.)

Aug. 4. Tues. Today I have been moving into the rooms across the hall and Mr. Cooke and Robert have been taking up old carpets and cleaning my suite of rooms, preparatory to painting them. Have written to Ada. (T.S.R. 52. 2 P.M. 85. S.S. 70.)

Aug. 5. Wednes. Walter McGary came and mended broken plaster in my front room so that it can now be painted, and Mr. Cooke and Robert have begun the painting. My front room, walls and ceiling are to be light green, my bedroom is to be white, window sashes all around painted white, and all woodwork varnished. Then the floors are to be re-carpeted with new Crex carpeting-green. This is a new kind of matting, made from wood fiber. Received a letter from Willie and wrote to Susie Pascoe and Mrs. Alice D. Jewett. (T.S.R. 50. 2 P.M. 89. S.S. 75.)

Aug. 7. Friday. The Cookes completed the painting, varnishing and carpeting of my rooms, and they are looking very much improved. Received letters from Ida and Calvin and photos of the latter, very fine ones, and wrote to Bro. Horace a birthday letter, he being today 60 years old. Ida writes that Benton has just been spending a furlough of fifteen days at home, which was much enjoyed. This evening the Y.P. Society have held a Social on our lawn in all the heat, which caused their ice cream to be greatly appreciated. They had a fine attendance, a well-rendered program and lots of sport. Alma Locke has been one of the prime movers in this and deserves great credit. It was kept up till nearly midnight (T.S.R. 62. 2 P.M. 104. S.S. 86.)

Aug. 8. Saturday. Mr. Cooke and Robert left us today, thankful that, although the weather was so very hot, they have been able to finish this long-ago planned job of renovating my rooms. Now Mr. Cooke can come no more to help us, as the children are all to be at school and Ada needs his help. Received a letter from Ada and wrote to the children in the East. (T.S.R. 65. 2 P.M. 102. S.S. 80.)

Aug. 10. Monday. Received letters from Susie Pascoe and Eunice and wrote to Eureka. We learn of something very sad which happened last night. Mrs. Reiss, who with her large family, has lived out on the plains for between thirty and forty years, committed suicide last night. She deliberately planned and executed it, being near death when it was discovered. She was not well, and besides was deaf and nearly blind. Her husband wished to move to Lockeford, but she did not wish to. She was almost sixtysix years old. She took a dose of strychnine, but was conscious to the last and talked with her husband about it. She was grandmother of two of Hannah's music pupils. (T.S.R. 52. 2 P.M. 97. S.S. 70.)

Aug. 11. Tuesday. John Soles is covering the roof of the front part of the granary building with galvanized iron roofing, instead of re-shingling it. We think this will wear longer than shingles. Received a letter from Theresa and wrote to her and to Ada. Theresa writes from Greve's ranch where they are camping. She writes of visiting the Sandoz family and on Sunday attending a meeting at their house. They have five daughters and one son, and now own and carry on the Ponge place, Mr. Ponge having gone back to Switzerland. One of the girls, Louise, is said to be engaged to be married to a German Swiss by the name of Bossen. Mrs. Reiss was buried at Brick Church. (T.S.R. 52. 2 P.M. 87. S.S. 72.)

Aug. 12. Wednes. Received a letter from Willie and wrote to Susie Pascoe. Willie writes of heavy rains in New England and thunderstorms in which the lightning did great damage. The Congregational meeting house near Horace's house in the Sturbridge, 124 years old, with a tall spire, was struck by lightning and burned to the ground. Only the Sunday before, Willie being there, went to church with them in that building. This was probably the last service in the house. Willie had gone there to get Walter who had been visiting there for three weeks. Dean had gone camping. (T.S.R. 50. 2 P.M. 87. S.S. 72.)

Aug. 13. Thurs. Eunice is today thirty four years old, and now just settled in their new home in Portland, Oregon. I pray that she may find Jesus there! Received a call from Kate and Nellie Inglis. Have not seen Kate before since she began to train for a nurse nor Nellie since she was a small child, and now she has taught school for two years near Woodbridge, and is to teach one of the grades in Lodi now when the schools open. She is pretty and Kate has improved greatly with training. She came to inquire about my asthma remedy for a friend. (T.S.R. 54. 2 P.M. 80. S.S. 66.)