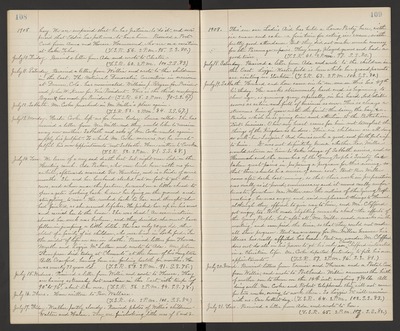 July 11. Saturday. Received a letter from Willie and wrote to the children in the East. The National Democratic Convention in session at Denver, Colo. has nominated William J. Bryan for president and John W. Kerr for Vice President. This is the third campaign. Bryan has made for President. (T.S.R. 65. 2 P.M. 90. S.S. 67.)

July 13. Monday. Hester Cooke left us for home today. Laura called. She has received a letter from Mr. Miller and they would like to remain away over another Sabbath and asks if Mr. Cooke would again supply his pulpit. To which Mr. Cooke answers, "no, he must fulfil his own appointments next Sabbath. Have written to Eureka. (T.S.R. 52. 2 P.M. 81. S.S. 68.)

July 14. Tues. We learn of a very sad death last Sat. night near Lodi on the Hunting ranch. Ada Parker, who once lived here with us for awhile, afterwards married Geo. Hunting, and is a bride of some months. She and her husband started out on foot to get the cows, and when near the pasture, he went on a little ahead to open a gate. Looking back he saw her lying on the ground and struggling to rise. He rushed back to her and thought she had fainted, as she seemed lifeless. He picked her up in his arms and carried her to the house. She was dead! An examination showed her neck was broken, and they decided she must have fallen in jumping a little ditch. She was only 20 yrs. old, the eldest of a family of six children, who once lived in Lockeford. "In the midst of life we are in death." Received letters from Theresa Myrtle and Lizzie McLellan and wrote to Ada. Mr. John Thompson died today at Clements at the home of his daughter Belle Crawford, having been in failing health for months. He was nearly 73 years old. (T.S.R. 53. 2 P.M. 91. S.S. 75.)

July 17. Friday. Weather partly cloudy. Received photos of Willie's children. Walter and Helen. They are finelooking little ones of 5 and 2.

July 19. Sabbath. Howard and Lou came in to see me on this his 49th birthday. He works strenuously hard and is beginning to show age, is growing gray, especially in his beard, but still seems as active and full of business as ever. This is always a strenuous time of year with the fruit, the dairy, the hay, &.c. Besides which he is giving time and attention to the Protection Dist. business. O how my heart craves for him not to neglect the things of the Kingdom as he does. Their six children are all doing so well - how I rejoice! And Lou is such a good and faithful wife to him. It was not difinitely known whether Rev. Miller would return in time to take charge of Sabbath services, and so Hannah and the members of the Young People's Society had taken great pains in preparing a program for this evening, so that there should be a service of some sort. But Rev. Miller came after dark last evening, so that their work in preparation was really as it proved, unnecessary and it seems really unfortunate, for when Mr. Miller saw the notices of the Young People's meeting, he was angry and said unpleasant things to Hannah although they offered to give way to him, and Mr. Clifford got angry, too. Both made slighting remarks about the efforts of the Young People, but after all, Mr. Miller made remarks in the meeting, and occupied the time, so that they could not render all their program. But we are sorry for Mr. Miller because his illness has really affected his head. But we wonder Mr. Clifford does not do all in his power to get his only son Claude Clifford interested in a Christian life. Mr. Cooke departed yesterday to fill his own appointments. (T.S.R. 57. 2 P.M. 96. S.S. 81.)

July 20. Mond. Received letters from Eunice and Theresa and a Postal Card from Willie, and wrote to Portland - Willie announces the birth of another son to them on the 14th inst. weighing 9 3/4 lbs. All doing well. Mr. Cooke and Robert telephoned they will not come for two weeks, serving to work there. So Lizzie W. will remain with us. Our hottest day. (T.S.R. 64. 2 P.M. 102. S.S. 83.)