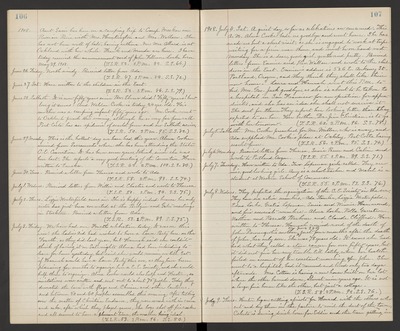 1908. Aunt Susie has been on a camping trip to Camp Meeker on Russian river with Mrs. Huntington and Mrs. Wallace. She has not been well of late, having asthma. Now Mrs. Allard is at Oakland with her while Frank and Maude are here. I have today received the announcement card of John Fillmore Locke born May 29, 1908. (T.S.R. 52. 2 P.M. 82. S.S. 66.)

June 28. Sabbath. It is now fifty years since Bro. Elmer died! Fifty years! how long it seems! And Weldon Cooke is today 24 yrs. old. His mother was a creeping infant fifty years ago. Mr. Cooke went to Oakley to preach this evening, although he is very far from well. Port Costa has an epidemic of scarlet fever and no Sabbath service. (T.S.R. 50. 2 P.M. 95. S.S. 82.)

June 29. Monday. This is the hottest day we have had this year. Alma Cooke arrived from Sacramento where she has been attending the State C.E. Convention. It has been seven years, I think, since she was here last. She reports a very good meeting of the Convention. Have written to Eureka. (T.S.R. 62. 2 P.M. 100. S.S. 80.)

July 2. Thurs. Lizzie Westerfield came in. She is happy indeed because her only sister has just been converted at the Bulgin and Gates meetings in Stockton. Received a letter from Ada. (T.S.R. 53. 2 P.M. 89. S.S. 75.)

July 3. Friday. We have had our Fourth celebration today. It was on this wise! the Ladies Aid had wished to have a Lawn Party here on the Fourth, as they did last year, but Hannah said she couldn't think of having it on Sat. night. Alma had been intending to leave for home yesterday, but said she would remain on till Sat. if Hannah would have a Lawn Party this eve, as they have been planning for months to organize here a C.E. Society, and she would help them to organize. Alma Locke would also help and Hester, so invitations were written and sent out to about 75 people. Today they decorated the lawn with flags and Chinese and other lanterns, and between 50 and 60 people assembled this evening. After talking over the matter of Christian Endeavor, they were served with ice cream and cake, after which they played games, the boys shot off fruitcakes and all seemed to have a pleasant time, the weather being ideal. (T.S.R. 53. 2 P.M. 96. S.S. 80.)

1908. July 4. Sat. A quiet day so far as celebrations are concerned. This A.M. Alma Cooke bade us goodbye and went home. She has made us but a short visit, as she is engaged to work at tupe writing for a firm near them and must be on hand next Monday. She is a dear, good girl, gentle and pretty. Received letters from Eunice and Rev. Wallace and wrote to the children in the East. Eunice's address is 526 E. Ankeny St. Portland, Oregon, and they think they shall like their new home. Laura and Hannah went this P.M. to bid Mrs. Geo. Jack goodbye, as she is about to be taken to a hospital in San Francisco for an operation for appendicitis, and she has an idea she shall not survive it. She sent for them. They report her looking better than they expected to see her. Her brother, Dr. Jim Christian, is to go with her tomorrow. (T.S.R. 62. 2 P.M. 96. S.S. 78.)

July 8. Wednes. They perfected the organization of the C.E. Society in the eve. They have six active members, - Ada Stemler, Lizzie Westerfield, Edna Locke, Gratia Lopeman, Susie and Winnie Hammond, and five associate members! - Alma Locke, Rolla Garretson, Nathan and Roswell Barbour and Claude Clifford. Have written to Theresa. Hannah received word of the death of John Demangeot's mother, on June 28th just four months after the death of John, her only son. She was 78 years old. It seems she had had what they called a stone cancer for over fifty years, but it did not give her any trouble till lately, when her health failed on account of her constant mourning for John. She went to a hospital, had it removed and lived only two days afterwards. Mrs. Cotton is having a new house built on her lot where the other burned down, almost nine years ago. It is not a large, fine house like the other, but just a cottage. (T.S.R. 58. 2 P.M. 92. S.S. 76.)

July 9. Thurs. Hester began cutting apricots for Howard with the others who cut and dry them in the pasture to avoid the dust of the town Celeste is driving derrick horse for Eddie and the team getting in