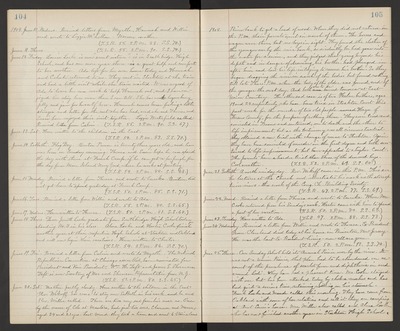 June 12. Friday. Louise Locke is now "sweet sixteen" - is in Southbridge High School, and has one more year there - is a great help and comfort to her mother. Ada left for her own home today and Hannah and Celeste returned to us. They met in Stockton at the train and had a little visit while the train waited. It was so good of Ada to leave her own work to help Hannah out, and I have enjoyed her stay here more than I can tell. She has make loganberry jelly and jam for herself here. Hannah comes home feeling a little stronger and better for the rest she has had, and she and Theresa and Susie have enjoyed their visit together. Lizzie Westerfield called. Received letter from Calvin. (T.S.R. 55. 2 P.M. 90. S.S. 67.)

June 14. Sabbath. Flag Day. Benton Pascoe is twentythree years old, and he was born on Sunday morning. Theresa and Susie hope he can spend the day with them at French Camp, if he can get a furlough for the day from Mare Island Navy Yard, where he works at painting. (T.S.R. 54. 2 P.M. 80. S.S. 68.)

June 18. Thurs. Dean Jewett Locke graduates from Southbridge High School today standing No. 3 in his class. Alma Locke and Hester Cooke finish another year at their respective High Schools at Stockton and Oakland and will now begin their vacations. Have written to Chester. (T.S.R. 54. 2 P.M. 86. S.S. 70.)

June 19. Fri. Received a letter from Calvin and wrote to Myrtle. The National Republican Convention at Chicago assembled, have nominated for President and Vice President, Wm. H. Taft and James S. Sherman Taft is now Secretary of War and Sherman Representative from N.Y. (T.S.R. 51. 2 P.M. 80. S.S. 65.)

June 20. Sat. Weather partly cloudy. Have written to the children in the East. Rev. Wikoff has come to stay over Sabbath in his work, and he and Rev. Miller called. There are two very sad families near us. One by the name of Cole at Manteca, had just two sons, Clarence and Warren, aged 24 and 21 yrs. Last Mond. they look a team and went to Stanislaus

1908. River bank to get a load of wood. When they did not return in the P.M. their parents went in search of them. The horses and wagon were there, but no boys in sight. They found the clothes of the younger one by the river bank, so evidently he had gone into the water for a swim, and they judged that going beyond his depth and in danger of drowning, his brother had plunged in after him and lost of his life trying to rescue his brother. So they began dragging the river in search of the bodies but found nothing till late Thurs. P.M. when the body of the elder was found, and of the younger the next day. And both are to be buried tomorrow at East Union Cemetery. The other sad case is of two Helm brothers, ages 19 and 22 respectively who have been tired in Stockton Court this past week for the murder of two old people named Hayes of Thesno County, for the purpose of robbing them. They were tried and convicted in Fresno and sentenced, one to death and the other to life imprisonment, but as the testimony was all circumstantial they obtained a new trial with change of venue to Stockton. Again they have been convicted of murder in the first degree and both sentenced to life imprisonment, but have appealed to a higher Court. The parents have a harder trial than those of the drowned boys. Cool weather. (T.S.R. 52. 2 P.M. 69. S.S. 60.)

June 24. Wednesday. Received a letter from Willie and wrote to Theresa. Ex-President Grover Cleveland died today at his home in Princeton, New Jersey. He was the last Ex-President living - now all are gone. (T.S.R. 50. 2 P.M. 93. S.S. 74.)

June 25. Thurs. Our Sunday School held its Annual Picnic over by the river. It was not a Union Picnic, that plan had to be abandoned on account of the prevelance of scarlet fever and diphtheria in and around Lodi. They have had a pleasant time. Mr. Cooke stayed with me but has been attacked today by cholera morbees and has had quite a serious time, retaining nothing on his stomach. Frank Locke and Maude called this morning. They have come from Oakland with some of her relatives and call it they are camping at Aunt Susie's house. Mrs. Miller also called and Alma Locke who has now finished another year in Stockton High School.