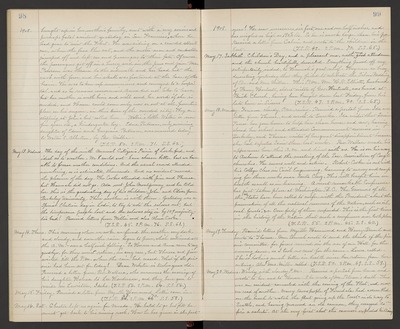 1908. brought up in her mother's family, met with a very serious and perhaps fatal accident yesterday in San Francisco, where he had gone to view the Fleet. He was riding on a crowded street car, when the fuse blew out, and the motor-man and conductor jumped off and left car and passengers to their fate. Of course the passengers got off in a hurry and in the press and jam Mr. Peterson was thrown to the sidewalk and his head hit the curb with force, and his skull was fractured at the base of the brain. He was taken up unconscious and conveyed to a hospital, and as he remains unconscious, Anna did not like to leave, but her mother is with him and will send her word if she is needed, and Horace could come only now or not at all, from his place on his engine, in this time of the crowded city. They are stopping at John's but called here. Willie's little Walter is now five years old, a kindergarten boy. Edna Putnam, only surviving daughter of Edwin and Georgiana Putnam, was married today to Walter E. Albertson, by Rev. Miller. (T.S.R. 50. 2 P.M. 71. S.S. 62.)

May 13. Wednes. The day of the ninth Annual Citizen's Picnic of Lockeford, and ideal as to weather. We could not have chosen better had we been able to foresee weather conditions. And the usual crowd attended numbering, as is estimated, thousands. And no accident marred the pleasure of the day. The Cookes attended with Jim and Theresa but Hannah did not go. Ada met John Montgomery and he told her this is the graduating day of his children, John and Olive, from Berkeley University. Their mother is with them. Yesterday was a Special Election day in Lodi, to try to vote the saloons out, but the temperance people lost and the saloons stay in by 109 majority. too bad! Received letters from Willie and also Alma Cooke. (T.S.R. 45. 2 P.M. 76. S.S. 61.)

May 14. Thurs. This morning when we woke we found the weather very dark and cloudy, and soon the rain began to pour, which continued all the A.M. - over a half inch falling. So Horace and Anna came to say goodbye, for they must return, in any case, but Theresa and Jim waited till the P.M. when the rain had ceased. What if the picnic had been set for today! Dean Webster is twelve years old. Received a letter from Rev. Wallace, who announces the marriage of his daughter Helana to Lee Henderson, and they have gone to reside in Lewiston, Idaho. (T.S.R. 56. 2 P.M. 64. S.S. 56.)

May 16. Sat. Chester left us again for Nevada. He hated to go but felt he must get back to his mining work. How he has grown in the past

May 17. Sabbath. Children's Day, and a pleasant one, with very good attendance and the church beautifully decorated. Everything passed off very satisfactorily indeed, to Hannah's great relief. They were so busy decorating yesterday that they failed to celebrate the Silver Wedding of Rev. and Mrs. Miller. This P.M. Mr. H.B. Elliott, husband of Fanny Hartwell, eldest sister of Geo. Hartwell, was buried at Brick Church, having been brought down last Friday, from his late home in Sissons (T.S.R. 47. 2 P.M. 80. S.S. 65.)

May 18. Monday. Forenoon cloudy, P.M. rainy. Received a postal from Ida and letter from Theresa, and wrote to Eureka. Ida writes that Susie Pascoe has gone home to help her clean house and sew, having closed her school and attended Commencement exercises in Berkeley, and Theresa writes of her great disappointment because she had expected Susie there last week. Rev. Wallace made his appearance here this A.M. and dined with us. He is on his way to Auburn to attend the meeting of the Sac. Association of Cong'l churches. He seems well and active. Robert Cooke is out with his College class in Civil Engineering, learning to survey and camping for three weeks near Santa Cruz. This will benefit him in Conference has just taken place at Washington, D.C. The Governors of all the 46 States have been called to confer with the President about the preservation of all the natural resources of the Nation, such as oil, coal, forests, &.c. Over forty of them responded. This is the first time in the history of the Nation that such a conference ever took place. (T.S.R. 55. 2 P.M. 65. S.S. 60.)

May 19. Tuesday. Received letter from Myrtle Hammond and Henry Bruml and wrote to Theresa. Mr. Bruml wrote to send the thanks of the picnic committee for favors received in the use of our Hall for the evening dance, as I took no rent for the same. Laura called. She is looking much better in health since her return from her outing. Also Mrs. Miller called. (T.S.R. 50. 2 P.M. 69. S.S. 59.)

May 20. Wednes. Windy with cloudy P.M. Received a postal from Anna and wrote to her and to Horace. She wrote of Mr. Peterson's death. This was an accident connected with the coming of the Fleet, and now we read of another. Many towns - people of Ferndale had assembled on the beach to watch the fleet going up the Coast on its way to Seattle, and having procured an old cannon, they essayed to fire a salute. At the very first shot the cannon exploded killing