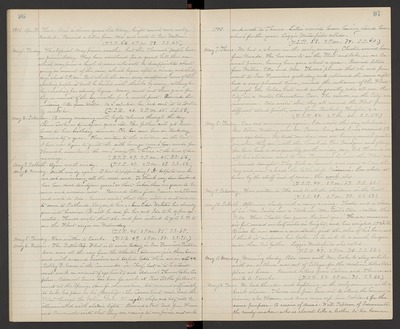 May 1. Friday. This typical May picnic weather, but the Clements people have no picnic today. They have advertised for a grand ball this eve which may prove a bawl to some who will be disappointed about going on account of the rain, which began after a cloudy and chilly day, about 8 P.M. But while the rain may disappoint some of the sporting people, it will be hailed with thanks by many, although hay-making has already begun. Many must cut their grain for hay on account of the dry weather for a month past. Received the missing letter from Willie. As I expected, he had sent it to Boston by mistake. (T.S.R. 46. 2 P.M. 65. S.S. 58.)

May 2. Saturday. A rainy morning with light showers through the day. Alma Cooke is twentyone years old. Her father will get down home to her birthday dinner. She has now been in Berkeley University a year. Have written to the children in the East. I have now begun to quilt the silk lounge cover I have made for Hannah, similar to the one I made for Theresa at the time of her marriage. (T.S.R. 47. 2 P.M. 65. S.S. 56.)

May 4. Monday. North windy again. O how disappointing! It helps to make our sad anniversary all the more sad. To think my dear husband has been dead twentyone years! so that babies then are grown to be men and women now. Received letters from Eunice and Theresa and wrote to Ada. Eunice writes that they intend next month to move to Portland, Oregon, to live, where Edw. Webster has already gone into business. It will be sad for her and Ida to be so far separated. Theresa writes that she and Jim intend to go to S.F. to see the Fleet arrive on Wednesday. (T.S.R. 45. 2 P.M. 75. S.S. 68.)

May 6. Wednes. The Battle-Ship Fleet is to arrive today in San Francisco. Sixteen have come all the way from the Atlantic, two more join them here and with armored cruisers and torpedo boats there are in all 44. Robley D. Evans is the Commander-in-Chief, but is to be retired next week on account of age limit, and Admiral Thomas takes his place. Admiral Evans has been for weeks at Paso Robles for treatment at the Springs there for rheumatism, but recovered sufficiently to take his place on his flagship - the Connecticut and lead the Fleet through the Golden Gate. At night, ships and city will be illuminated with electric lights. Received a Post Card from Horace and Anna, who write that they are coming to our picnic next week

May 7. Thurs. We had a shower in the early morning. Chester arrived home from Nevada. He has come to see the Fleet and take in our Annual picnic, having been gone about a year. Received letters from Willie, Etta and Ada. Theresa phoned that she and Jim went to San Francisco yesterday and returned the same night had a very pleasant time, viewed the entrance of the Fleet through the Golden Gate and subsequently rode all over the City in a Motor Observation Car. The crowds in the City are immense. Ada writes that they all viewed the Fleet from different stand points, some from Berkeley heights, D.C. (T.S.R. 50. 2 P.M. 66. S.S. 55.)

May 8. Friday. Our sad anniversary again. Ida would this day celebrate her silver Wedding, were Mr. Pascoe here, and I was married 53 years ago today. We trust our dear ones are having much greater joy where they are, with the Lamb in His Kindgom and glory. We have had a disagreeably north windy day, but Howard and all his children went to San Francisco to view the Fleet and returned tonight. They took a launch and went out in the Bay and went aboard the battleship Missouri. Lou abode at home by "the stuff" and of course, the work, also. (T.S.R. 44. 2 P.M. 67. S.S. 62.)

May 10. Sabbath. Afternoon cloudy with a rainy evening. Chester and a drum of his. Mr. Carter, now a Clerk in Mr. Coil's Store - called this P.M. How Chester has grown the past year! He now measures six feet, one and one-half inches in height, and has weighed 192 1/2 lbs. Besides he now wears a moustache, just the color of his hair, and I think it improves his looks. So he is to be a much larger man than his father. Lizzie Westerfield also called. (T.S.R. 47. 2 P.M. 76. S.S. 56.)

May 12. Tues. We had thunder and lightning in the early morning with a brisk shower. Theresa and Jim drove out to attend the morrow's picnic, also Horace and Anna came up from Oakland for the same purpose. A cousin of Anna's - Will Peterson of Sacramento, the candy-maker - who is almost like a brother to her because