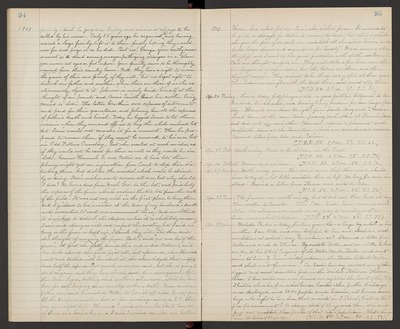 1908. property which he prized so highly and wished it always to be called by his name. Only 55 years ago he acquired it and having reared a large family left it to them. fondly hoping they would care for and prize it as he did. But no! George, your costly monument is to stand among unsympathizing strangers in a place you never set eyes or feel upon. Your family seems to be thoroughly weaned from their country home. Well, they have a right to move the graves of their own family if they will, but no legal right to disturb our father and mother, when there are those of us who so strenuously object to it. Johnnie is nearly beside himself at the thought of our parents and Annie Smith and her mother being carried to Lodi. The latter bore their own expenses of interment and paid for their gravestones, and Johnny bore all the expenses of father's death and burial. Today he begged Susie to let them remain where they are, and offered to buy the whole enclosed lot but Susie would not consider it for a moment. Then he proposed to remove them, if they must be removed, to his own lot in Odd Fellows Cemetery, but she scouted at such an idea, as if they would not be cared for there as well as they would be in Lodi, because Hannah G. and Nettie are to have lots there. Johnny might get an injunction from Court to stop their disturbing them, but dislikes the scandal which would be stirred by so doing. Susie wishes me to remove all ours, but why should I do so? We have a deed from Uncle Geo. to the lot, and paid half the expense of the fence which encloses the two lots from the rest of the field. It was not my wish in the first place, to bury there but I yielded to Geo's wishes at the time of my husband's death and consented to erect our monument there. And now I think it is wicked to disturb the sleepers, unless it is absolutely necessary Susie said strangers will not respect the cemetery, but I said as long as the fence is kept up, I think they will. She then said she thought of removing the fence. But I said "we own half the fence". at first she flatly denied this and so did Wallace, said her books showed she paid for it all, but afterwards, when Howard went and talked with her about it, she acknowledged that we did bear half the expense. Not much more was said, but she is going to do it anyway, and they have already made their arrangements. After this Susie began talking about mother's silver-ware, which has been here for safe keeping since our step mother's death. Susie said our father once said he wished Nettie to have it all after he was gone Of the teaspoons mother had at her marriage marked "S.S." there are now eight left. Hannah G. said she would like to have one of them as a keepsake, and I said I wished one, also and brother

1908. Horace had asked for one. Susie also wished for one. It seemed to be quite a struggle for Nettie to consent to do it, but after a while she gave the four of us each one, and took all the silver knives and forks, large spoons and sugar spoon for herself. It was evening when they left and I went to bed quite prostrated with all the excitement. But one thought comforts me. They will take a few bones and the few fragments of coffins away, but the bodies are there, and there they will remain. They cannot take them away after all these years. Their bodies are mingled with the dust there, and must stay there. (T.S.R. 54. 2 P.M. 69. S.S. 60.)

Apr. 24. Friday. Lou is today forty five years old - a good faithful help meet to her husband, kind hearted, and bearing heavy burdens for her large family. Hannah came home tonight from Santa Cruz and Theresa went home at the same time, passing each other at French Camp but did not see each other. Hannah reports a pleasant and profitable time at the Convention, which was considered a success. Received letters from Ada and Calvin. (T.S.R. 55. 2 P.M. 77. S.S. 62.)

Apr. 29. Wednes. Webster Parker is today fourteen years old - a large boy as tall as his mother, I am told, and very helpful to her, and studious and ambitious at school - may he continue so! Received a letter from Willie and wrote to Theresa. By mistake Willie sent me a letter he had written to his Chief Engineer of the Water Works, Boston, and sent mine to him. So I immediately returned the Boston letter to Willie and shall wait for mine. On Easter Sunday occurred one of the biggest and most disastrous fires in the United States in Chelsea, Mass. Three miles area were burned over right in the heart of the City. Thirteen churches, five school houses besides other public buildings were destroyed, and 10,000 people made homeless, all because some boys, who ought to have been that minute in S. School, built a bonfire for amusement! A strange state of things exist there, it is said Jews now constitute three fourths of that city's population. What a change from the times of 50 yrs. ago. (T.S.R. 55. 2 P.M. 90. S.S. 77.)