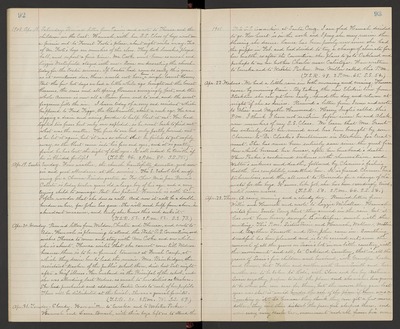 1908. Apr. 18. Saturday. Received letter from Eunice and wrote to Theresa and the children in the East. Hannah with her S.S. Class of boys went on a picnic out to Forrest Foote's place, about eight miles away. Two of Mr. Foote's boys are members of the class. They took lunches, played ball, and report a fine time. Mr. Cooke went home as usual and Lizzie Westerfield stayed with me. Some are decorating the church today for the Easter services. If Easter had come as early this year as it sometimes does, there would not have been a single locust bloom. But the few hot days we had a little while ago brought out the locust blossoms, the roses and all spring blossoms amazingly fast, and the whole Avenue is now all a bloom from end to end, and the sweet fragrance fills the air. I learn today of a very sad accident which happed to Fred Figge, the blacksmith, about a week ago. He was digging a drain and using powder to help blast it out. He had lighted two fuses but only one exploded, so he went back to find out what was the matter. The fuse to one had only partly burned out so he let it again but it was so short that he failed to get safely away, so the blast came into his face and eyes, and it is greatly feared he has lost the sight of both eyes. It will indeed be terrible if he is blinded for life! (T.S.R. 46. 2 P.M. 80. S.S. 75.)

Apr. 19. Easter Sunday. Fine weather, the church beautifully decorated, good music and good attendance at the services. The S. School took an offering for a Chinese Kindergarten in Foo-Chow, Miss Jean Brown's. Celeste is today twelve years old, a large boy of his age, and a very trying child to manage. But how patient Hannah is with him. I often wonder that she does so well. And now it will be a double burden on her, for John has gone. She will need help from above in abundant measure, and truly she knows this and seeks it. (T.S.R. 53. 2 P.M. 83. S.S. 73.)

Apr. 20. Monday. Received letters from Weldon, Chester and Theresa, and wrote to Ada. Hannah is planning to attend the State S.S. Convention and wishes Theresa to come and stay with Mr. Cooke and me while she is absent. Theresa writes that she cannot come till Wednes. because there is to be a funeral tomorrow at French Camp, at which they desire her to lead the music. Mrs. Bain bridge, the assistant teacher of the public school there, died last Sat. night after a brief illness. Her husband is the Principal of the school, and she was attending last Wednes. as usual to her duties as teacher. She had purchased and addressed Easter Cards to each of her pupils These will be distributed at the burial. She was a general favorite. (T.S.R. 50. 2 P.M. 75. S.S. 59.)

Apr. 21. Tuesday. Cloudy. Have written to Eureka and to Webster Parker. Hannah and Laura Bruml, with their boys, left us to attend the

1908. State S.S. Convention at Santa Cruz. I am glad Hannah decided to go. Her heart is in the work and I pray she may receive the blessing she desires. Laura has been poorly ever since she had the grippe in Feb. and had decided to try a change of climate for her health, so after the Convention she plans to go to Oakland and perhaps to see her brother Charlie near Calistoga. Have written to Eureka and to Webster Parker. Mrs. Miller called this P.M. (T.S.R. 49. 2 P.M. 65. S.S. 54.)

Apr. 22. Wednes. We had a little rain in both morning and evening. Theresa came by morning train. By taking the new Electric line from Stockton She can get here early, spend the day and return at night if she so desires. Received a letter from Irene and wrote to Alice and Myrtle Hammond. Harry Inglis called this P.M. I think I have not see him before since he and Aleck were members of my S.S. Class. We learn that Mrs. Grant has entirely lost her mind and has been brought by son Clarence to Dr. Clarke's Sanitarium in Stockton for treatment. She has never been entirely same since the great fire here which burned her house, after her husband's death. Then Parker's continued sickness with rheumatism and Walter's sickness and death, followed by Clarence's failing health, has completely unsettled her. It is feared Clarence has tuberculosis and they all went to Riverside for a change of climate for the boys. It seems, like job, she has been exceedingly tried, until reason wavers. (T.S.R. 50. 2 P.M. 66. S.S. 56.)

Apr. 23. Thurs. A rainy morning and a cloudy day. Received letters from Willie and Hannah and wrote to Lizzie McLellan. Hannah writes from Santa Cruz that they arrived in the rain but it has not been heavy enough to interfere much with the meeting. This P.M. Sisters Susie and Hannah, Wallace Nettie and Arthur Truscott and Bro. John Came in. Something dreadful has been planned and is to be carried out, even the removal of all the graves on Susie's lot in our little cemetery with the monument and all, to Oakland Cemetery, that is, all the graves of Susie's five children and husband, with Grandpa Locke and Elmer, but Father and mother with Annie Smith and her mother are to be taken to Lodi, with Clara and her boy Arthur. Susie says they propose to sell the place and she wishes her graves to be where she can care for them, but the reason they grave last year was that it would hinder the sale of the place if there was a Cemetery on it. So because they think they can get a few more dollars, they will thus disturb the peaceful sleepers there, and even carry away Uncle Geo. monument and all from his own