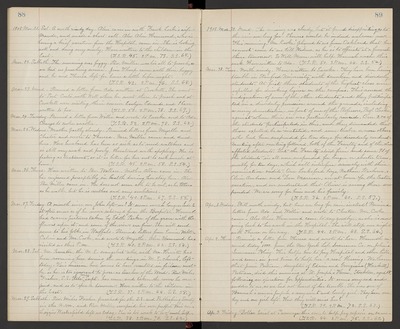 Mar. 23. Mond. Received a letter from Ada written at Crockett. She went to Port Costa with Will when he went there to preach and at Crockett were visiting their cousin Evelyn Edwards and I have written to her. (T.S.R. 50. 2 P.M. 78. S.S. 69.)

Mar. 25. Wednes. Weather partly cloudy. Received letters from Myrtle and Chester and wrote to Theresa. Mrs. Miller came and divide here. Her husband has been so sick as to need watchers and is still very weak and poorly, threatened with apoplexy. He is fasting as treatment, so it is better for her not to cook much at home. (T.S.R. 45. 2 P.M. 58. S.S. 54.)

Mar. 27. Friday. A month since our John left us! It seems much longer. Indeed at often seems as if he never returned from the Hospital. Hannah had camera pictures taken by Edith Parker of the grave with the flowers upon it, and some of the views are fine. She will send some to his folks in Buffalo. Received letters from Eunice Webster Calvin and Mr. Cooke, and wrote to Myrtle. Alice Hammond has visited us this P.M. (T.S.R. 40. 2 P.M. 62. S.S. 54.)

Mar. 28. Sat. Mr. Kreister, the M.E. evangelist who, with Mr. Hewitt has been rooming here during the meetings in M.E. church, left today. His mission here seems to have resulted in failure mostly, as he is too ignorant to pose as teacher of the Word. Rev. Miles Fisher, S.S. State Miss. Supt. has come and taken the room he occupied, and is to speak tomorrow. Have written to the children in the East. (T.S.R. 37. 2 P.M. 64. S.S. 58.)

1908. Mar. 30. Mond. The morning was cloudy, but it it proved disappointing as to the rain we long for. Showers would be indeed welcome now. This morning, Mr. Cooke phoned to us from Oakland that he cannot come to us till Wednes. as he is to officiate at a funeral there tomorrow. So will Moore will help Hannah wash this week. Have written to Ada. (T.S.R. 50. 2 P.M. 64. S.S. 54.)

Mar. 31. Tues. North windy. Have written to Eureka. They have been having trouble in Stanford University with drunken and disorderly students. At first three students of the highest class were expelled for drinking liquor on the campus. This roused the indignation of some of the other students, and they participated in a disorderly procession around the grounds, including a noisy demonstration in front of one of the Professors, Prof. Clarke against whom their we was particularly roused. Over 200 of the students participated in this, and they demanded that those expelled be re-instated, and some twelve or more others who had been suspended for ten days for disorderly conduct meeting after meeting followed, both of the Faculty and of the disaffected students. But the Faculty stood form and some 91 of the students in all were suspended for longer or shorter terms, mostly for ten days, which will interfere seriously with their examination credits. Our Lockeford boys. Nathan Barbour, Oliver Ambrose and Dan Marceau, are at home for the Easter vacation, and we understand that Oliver is among those suspended. We are sorry for him and his family. (T.S.R. 36. 2 P.M. 60. S.S. 57.)

Apr. 1. Wednes. Still north windy, but how we long for rain instead! Received letters from Ada and Willie and wrote to Chester. Mr. Cooke came Also Alice Hammond came to say goodbye, as she is now going back to her work in the Hospital She wil stop over night with Theresa on her way. (T.S.R. 44. 2 P.M. 68. S.S. 64.)

Apr. 2. Thurs. Received a letter from Theresa and wrote to her. Hannah received today $1000, from the New York Life Insurance Co. on John's Insurance Policy. This helps her to pay Hospital and other bills, and comes in good time to help her a real blessing. We learn that Jessie Putnam, daughter of Edwin Georgiana (Hackett) Putnam, died this morning at St. Joseph's Home, Stockton, aged 18, following an operation for appendicitis. It seems very sad and sudden to us, as we had not heard of her trouble. She was one of Hannah's music pupils, a very sweet and lovely girl. They have one boy and one girl left. How they will miss her! (T.S.R. 39. 2 P.M. 72. S.S. 63.)