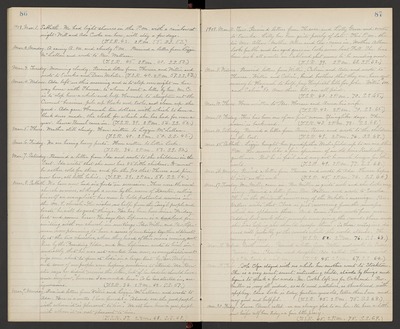 Mar. 4. Wednes. Ada left us this morning and is to stop over night on her way home with Theresa, to whom I sent a letter by her. Mr. C. is to stop here while and help Hannah to straighten out the Cement business, pike up blocks and tools, and clean up the yard. Ada gave Hannah ten dollars with which to have a Black dress made, the cloth for which she has had for over a year. Laura Bruml came in. (T.S.R. 39. 2 P.M. 56. S.S. 52.)

Mar. 8. Sabbath. We have now had six frosts in succession. There were the usual church services, although a man by the name of Kuester, calling himself an evangelist, has come to hold protracted services in the M.E. church. He wishes no help from the Cong'l people and boasts he will do great things. He has been here since Friday last and rooms here. He says Rev. Lopeman is a deadhead for uniting with our church in meetings. Rev. Miller and Rev. Lopeman were planning to have a series of meetings together alternately at the two churches, when they heard of this man's coming, sent here by the Presiding Elder, and Mr. Lopeman wrote to him immediately that he was not wanted here now, as evangelistic meetings were about to open at Lodi in a large tent by. Rev. Bulgin and some of our people were hoping sometimes to attend. Mr. Kenster says he didn't receive the letter, but if he had he should have come anyhow, "because I am needed here". So he has started in, an ignoramus. (T.S.R. 36. 2 P.M. 62. S.S. 57.)

1908. Mar. 10. Tues. Received letters from Theresa and Lilly Greve and wrote to Eureka. Lilly has been quite poorly of late. This P.M. the two Mrs. Allen. Mother Allen and Ora came in. Mother Allen looks feeble and had aged years in looks since last Fall. She has been sick all winter in Oakland, but seems to be mending now. (T.S.R. 39. 2 P.M. 68. S.S. 62.)

Mar. 17. Tuesday. Mrs. Miller came in. Rev. Miller is quite sick and she looks very weary. Received a letter from Rev. Wallace and wrote to Eureka. This is the thirteenth anniversary of the Webster's marriage. Rev. Wallace writes that Clara is just recovering from the mumps which are epidemic there. And Susie Pascoe wrote from near Ridding last week that mumps were going the rounds there and she was hoping she should escape them. So those contagious diseases will probably go the rounds while the world stands. The morning was foggy. (T.S.R. 52. 2 P.M. 76. S.S. 68.)

Mar. 19. Thurs. Little Olga stayed with us while her mother went to Stockton. She is a very sweet, smart, interesting child, stands by things and begins to speak a few words. Mr. Cooke left us for Oakland. Rev. Miller is very ill indeed, so as to need watchers, is threatened with apoplexy. Edna Locke is today fourteen years old, taller than I am and very good and helpful. (T.S.R. 45. 2 P.M. 75. S.S. 68.)