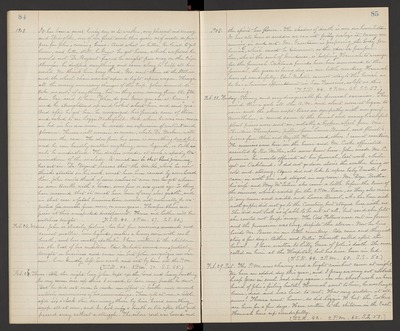 1908. It has been a most lovely day as to weather, very pleasant and sunny and Spring like, one of our first such this year, as if made on purpose for John's coming home. And what is better, he lived to get home, and better still, he knew he got home, which we feared he would not. Dr. Bryant feared he might pass away on the trip therefore he dropped everything and came along to help all he could. We think him very kind. Geo. met them at the Station and the wheel-chair was set upon a light express wagon. Through all the many necessary changes of the trip, John seemed to take no note of anything, but as they were coming from the Station, Geo. said to him, "John, do you know you are at home?" and he straightened up and looked about him and said "yes". And after he got here he recognized his friends, some of them and asked to see Lizzie Westerfield. And when he was once more in bed in his own room, he made an expression of content and pleasure. Theresa will remain as nurse, while Dr. Barbour will resume the case. The odor from his sons is something dreadful and he can hardly swallow anything, even liquids, or talk so as to be understood. The doctors wonder at such a speedy termination of the malady. It must now be that blood poisoning has set in. Dr. Bryant reasons that the trouble, which he now thinks started in his neck, must have been caused by some hard blow, John could think of none unless it were one he got when in some trouble with a horse, some five or six years ago. So they have reasoned that it must have been of very slow growth, and in that case a fatal termination would not naturally be expected for months from now, or even years. Therefore their surprise at this unexpected development. Theresa and Luther will be watches tonight. (T.S.R. 40. 2 P.M. 67. S.S. 60.)

Feb. 26. Wednes. John is steadily failing - has but few conscious moments and cannot swallow, even liquids, makes a heavy noise with each breath, and lies mostly apathetic. I have written to the children in the East of his condition. Edw. Webster arrived unexpectedly tonight on business and came in but John recognizes no one now, Lou kindly left her work and sat by him all the P.M. (T.S.R. 44. 2 P.M. 70. S.S. 65.)

Feb. 27. Thurs. All the night long John kept up the loud and heavy breathing. In my room here up stairs I seemed to hear every breath he drew. But he did not seem to make an effort to breath and seemed entirely unconscious of his surroundings. Then all at once, a little after six o'clock this morning, those by him heard something snap all at once, and he took only a breath or two after that and passed away without a struggle. "The silver card was loosed" and

1908. the spirit has flown. The shadow of death is over our household. It has all been so sudden we can not fully realize it. Many are coming in and out. Mr. Garretson is preparing the body for burial, which must be tomorrow, as the odor is fearful. Lou, who is the soul of kindness, is helping Hannah to arrange for the funeral. Oakland friends have been summoned to the funeral, the grave is being dug in our little cemetery. Hannah bears up wonderfully. Edw. Webster cannot stay to the burial as he has a business appointment in San Francisco, so left us this morning. (T.S.R. 44. 2 P.M. 65. S.S. 53.)

Feb. 28. Friday. Stormy and every disagreeable for funeral exercises. The wind blew a gale all the A.M. and about noon it began to rain and the skies wept tears in sympathy with our grief. Nevertheless, a crowd came to the burial and many beautiful floral pieces were sent in notably a broken wheel from Mrs. Christine Thompson, pillow from Laura Bruml, and florist pieces from Alice and Myrtle Hammond, others I cannot mention. The exercises were here in the house and Mr. Cooke officiated assisted by Rev. Miller, who never knew him. John made Mr. C. promise he would officiate at his funeral, last week, while yet in Oakland. I did not go down stairs the weather being so cold and stormy. Agnes did not like to expose baby Donald, so came in with him and stayed in my room. Mr. Dye, Bertha his wife and May McIntire also came a little before the time of the exercises, which waited for the 2 P.M. train, as they also came to my room and waited, and Laura Bruml, who has been sick with grippe, did not go to the Cemetery, but stayed here with us. She did not look as if able to be out at all, but said she felt she could not keep away. The Odd Fellows were out in force and the precession was long, despite the storm. Now he lies beside Mr. Pascoe in our little cemetery. Ada came and they will stay a few days. Arthur and Nettie Truscott called after the burial. I have written to Lilly Greve of John's death. She once called on him at the Hospital, but has since been in bed. (T.S.R. 44. 2 P.M. 60. S.S. 52.)

Feb. 29. Sat. The P.M. was showery and a bright rainbow came at night. We have an added day this year, and I pray we may not celebrate Leap Year in such sad way again. In one short week we have heard of John's failing health, Hannah went to him, he was brought home, died and was laid to rest. How very sudden it all seems! Theresa went home, so did Lizzie W. but the Cookes are here for a few days. Have written to the children in the East. Hannah bears up wonderfully. (T.S.R. 42. 2 P.M. 60. S.S. 53.)