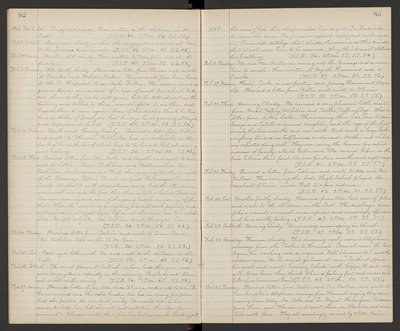 Feb. 11. Tuesday. Still partly cloudy. Received a letter from Theresa and wrote to Eureka and Webster Parker. Theresa and Jim have been to the Co. Hospital to see Mike Dillon. He was in a ward quarantined on account of a case of small pox which broke out there, so they could not go in, but he tottered out on the balcony and talked to them was delighted to see them and begged them to come again. Some of the doctors think he has had a stroke of paralysis, but he says he is growing stronger and hopes soon to be out. (T.S.R. 45. 2 P.M. 58. S.S. 54.)

Feb. 13. Thurs. Received letters from Mr. Cooke and Myrtle and wrote to Ada and to Lottie. Revs. Rathbone and Miller called. Rev. Rathbone lectured in our Hall this evening for the benefit of the Parsonage Repair Fund subject "Picturesque Sonoma County". illustrated with stereopticon views, but the attendance was small owing to the fact that there is to be a fall at Clements tomorrow evening and some of the young people are saving up for that. There the machine for lighting did not work property and as Myrle said "it went bang" before all the views had been exhibited. Receipts only $12. Rev. Rathbone spends the night here. (T.S.R. 34. 2 P.M. 54. S.S. 48.)

Feb. 17. Monday. Received letters from Ada and Theresa and wrote to John D. We are worried over the extra burden Ada his in caring for John but she protest she can do it easily. We would like to hire a nurse to help her but she will not entertain the idea for a moment. Theresa writes that Jim has had so much bleeding at

1908. the nose of late that she persuaded him to go to Dr. Fredericks to learn the cause. He found an exposed artery and cauterized it. The inside cartilage that divides the nose is so thickened that it will soon have to be removed, they think, as it obstructs his breathing. (T.S.R. 36. 2 P.M. 55. S.S. 54.)

Feb. 20. Thurs. Morning Cloudy. We received a very pleasant little visit from Mabel (Geffroy) McIntire and Bertha (Geffroy) Dye. Also a letter from Lottie Locke. This evening there was born to son George and Estelle a second daughter, and the age of the first is only thirteen months and one week. And such a large babe, weighing ten and one half pounds undressed. Mother and child are reported doing well. They now carry the banner for rapid increase of family, which Willie and Etta carried before, as the time between their first two was fourteen months and eight days. (T.S.R. 41. 2 P.M. 63. S.S. 57.)

Feb. 22. Sat. Weather partly cloudy. Received from Ada bad news of John and wrote to the children in the East. The discharge from John's wounds is much more copious and exceedingly offensive and he is visibly failing. (T.S.R. 47. 2 P.M. 59. S.S. 51.)

Feb. 24. Monday. Foreman cloudy. This morning early came a telephone message from the Cookes to Hannah. "Come at once." She had began her washing and so inquired "Will tomorrow do?" and the answer came, "No. he must go home at once." SO she dropped her work and went, leaving Celeste with Lizzie W. and myself. So we know they think John is failing fast and we are sad. Letters from Eunice and Dean M. (T.S.R. 48. 2 P.M. 60. S.S. 55.)

Feb. 25. Tuesday. Received letters from Willie and Rev. Wallace and wrote to Eureka, also a telephone message from Hannah saying they were coming home today, Mr. Cooke and Dr. Bryant, the surgeon, to accompany them, and Theresa is to meet them in Stockton and come home with them. They all accordingly arrived by 2 P.M. train.