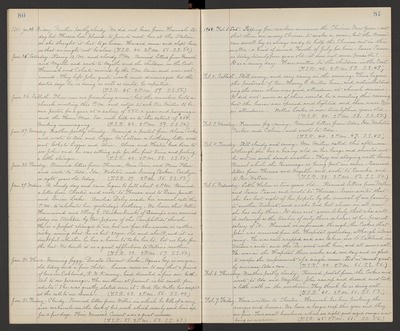 Jan. 25. Saturday. Rainy A.M. and cloudy. P.M. Received letters from Hannah and Myrtle and wrote to Myrtle and the children in the East. Hannah and Celeste arrived by the P.M. train and were Welcomed. They left John quite weak and discouraged but the doctor says he is doing as well as could be expected. (T.S.R. 45. 2 P.M. 59. S.S. 55.)

Jan. 27. Monday. Weather partly cloudy. Received a postal from Alma Cooke and wrote to Ada and Lizzie McLellan a birthday letter and sent books to Lizzie and Alice. Alma and Hester had been to see John and her was sitting up for the first time and feeling a little stronger. (T.S.R. 40. 2 P.M. 58. S.S. 50.)

Jan. 29. Wednes. A cloudy day and rain began to fall about 4 P.M. Received a letter from Chester and wrote to Theresa and to Dean Jewett and Louise Locke. Amelia Daley made her "annual call" this P.M. to celebrate her yesterday's birthday. We learn that Nellie Hammond and Ellory G. Stuckenbruck of Ocampo were married today in Stockton by Rev. Jopson of the Campbellite church. He is a perfect stranger to us, but we fear the union is rather risky, seeing that he is but 20 yrs. old and she 18, and it is doubtful wether he has a home to take her to. Let us hope for the best. No doubt it is a great affliction to Nellie's mother. (T.S.R. 39. 2 P.M. 57. S.S. 50.)

Jan. 30. Thurs. Morning foggy. Donald Stewart Locke, Agne's boy, is one year old today and a fine child. Laura came in to say that a friend of his in Oakland, R.W. Kinney, has donated a fine new bathtub to our parsonage. The one there at present is too small for adults. She was greatly slated over it. And Rev. Miller has accepted the call to our church. (T.S.R. 43. 2 P.M. 56. S.S. 48.)

1908. Feb. 1. Sat. Popping fire crackers announce the Chinese New Year not that there are many Chinese to make a noise, but the American small boy is always ready to help the Chinese out in this matter a kind of second Fourth of July for him. Susie Pascoe is today twentyfour years old. it does not seem possible! It is a rainy day. Have written to the children in the East. (T.S.R. 46. 2 P.M. 53. S.S. 47.)

Feb. 2. Sabbath. Still rainy, and very rainy in the evening. Thus begins the pastorate of Rev. Henry G. Miller here, and notwithstand ring the rain there was good a attendance at church services. It did not seem as if there would be a meeting this evening but the house was opened and lighted and there were ten in attendance. Nellie Locke is now twentythree years old. (T.S.R. 40. 2 P.M. 53. S.S. 50.)

Feb. 4. Tuesday. Still cloudy and rainy. Mrs. Miller called this afternoon Although she has a heavy cold on her lungs and should not be out in such damp weather. They are staying with Laura Bruml while the Parsonage is being put in order. Received letters from Theresa and Myrtle and wrote to Eureka and to Rev. Wallace. (T.S.R. 38. 2 P.M. 56. S.S. 50.)

Feb. 5. Wednesday. Little Helen is two years old. Received letters from Willie and Susie Pascoe and wrote to Theresa. Susie writes that she has lost eight of her pupils by the removal of one family to another District, and as she had but eleven in all, now she has only three. It does not seem likely that she will be retained as the teacher of only three scholars at her present salary of $70. Hannah is informed through the Cookes that John was removed from the Hospital yesterday, although it was rainy. He was well wrapped and was taken over to Oakland in Weldon's auto, and the Dr. went with him, and all seems well. He was in the Hospital three weeks and on day and is glad to escape the confinement of a single room. But it must greatly increase Ada's care. (T.S.R. 42. 2 P.M. 61. S.S. 56.)

Feb. 7. Friday. Have written to Chester. Hannah has been picking the oranges and lemons. We have a larger crop this year and they are fine. Two small branches on which are eight good sized oranges now hang in my room. (T.S.R. 45. 2 P.M. 61. S.S. 56.)