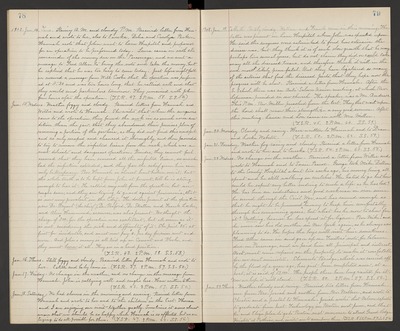 1908. Jan. 14. Tues. Rainy A.M. and cloudy P.M. Received letter from Hannah and wrote to her, also to Eureka, Delia and Carolyn Parker. Hannah wrote that John went to Lane Hospital and prepared for an operation to be performed today. Laura came in with the remainder of the money due on the Parsonage, and we sent a message to Fred Allen to bring the note and take the money, but he replied that he was too busy to come today. Just before night fall we received a message from Will Cooke that the operation was performed at 11:30 and was two hours long, that he rallied well and that they would send particulars tomorrow. They remained with John four hours after the operation. (T.S.R 47. 2 P.M. 58. S.S. 54.)

Jan. 15. Wednes. Weather foggy and cloudy. Received letters from Hannah and Willie and wrote to Hannah. She writes that when the surgeons came to the operation, they found the neck in so much worse condition than the jaw, that they abandoned their previous plan of removing a portion of the jawbone, as they did not find this needful and so only scraped and cleansed it thoroughly, and then proceeded to try to remove the infected tissue from the neck, which was a most delicate and dangerous operation. Besides, they cannot feel assured that they have removed all the infected tissue, so much had the infection extended, and they fear the relief given him can only be temporary. Poor Hannah is almost heartbroken over it, but the whole truth is to be kept from John at present, till he is strong enough to bear it. He rallied very well from the operation but now coughs some, and they are trying to guard against pneumonia, that is now very prevalent in the City. The doctors present at the operation were Dr. Bryant (the chief), Dr. Rexford, Dr. Stratton and Frank Locke, and Alice Hammond, as nurse, was also present. We thought the charge of $300. for the operation was exorbitant, but all assure us it is not, considering the risk and difficulty of it. She paid $35. at first incidentals, and must now pay $4. per day for room rent and nurse. And John's money is all tied up in Cement and Blocks, and they must borrow it all. They are in a hard position. (T.S.R 43. 2 P.M. 58. S.S. 53.)

Jan. 18. Saturday. We had showers in the morning and evening. Received letter from Hannah and wrote to her and to the children in the East. Theresa and I are enjoying our visit together greatly. Sometimes it seems almost mean that we should be so happy while Hannah is so afflicted, but we are trying to do all possible for them. (T.S.R. 47. 2 P.M. 64. S.S. 56.)

1908. Jan. 19. Sabbath. Partly cloudy. Wallace and Frank came in this morning. The letter was present in Lane Hospital when John was operated upon. He said the surgeons were astonished to find how extensive the disease was, but they think it is of such slow growth that he may perhaps live several years, but do not claim they did or could take away all the diseased tissue, and therefore think it well in the end most likely prove fatal. But they have ligatured so many of the arteries that feed the diseased parts, that they hope now the progress will be slow. Received a letter from Hannah. After the S. School, there was an Anti-Saloon Union meeting, at which Rev. Lopeman presided in our church. The speaker was a Mr. Andrews. This P.M. Rev. Miller preached from the text. "They that wait upon the Lord shall renew their strength", &.c. a very good sermon. After this meeting, Laura and Lou came in with Mrs. Miller. (T.S.R. 45. 2 P.M. 64. S.S. 59.)

Jan. 22. Wednes. No change in the weather. Received a letter from Willie and wrote to Hannah and to Susie Pascoe. George took Mike Dillon to the County Hospital about two weeks ago, his money being all spent and he still walking on crutches. He hated to go but how could he expert any better ending to such a life as he has led? He has been an industrious and good workman in iron since he served through the Civil War, and has earned enough so that he ought to be possessed of money to keep him comfortably through his remaining years, but what has he now to show for it? Nothing, because he has spend in for liquor. Poor Mike! and he never saw his old mother in New York again, as he always was planning to do. He hopes the boys will visit him sometimes. Fred Allen came in and gave up our Trustees' note for balance due on "Parsonage, and we paid him all, principal and interest. Next must come repairs on the property to make it comfortable for our next minister. Clements Bridge, which was carried off by the flood of a year ago, has just been completed anew, at a cost, it is said, of $13,000. The people there have long waited for it. Now we hope it will stand. (T.S.R. 50. 2 P.M. 57. S.S. 56.)

Jan. 23. Thurs. Weather cloudy and rainy. Received two letters from Hannah, one from Bro. Josiah and another from Rev. Wallace, and wrote to Chester and a postal to Hannah. Josiah writes that Nelson expects to graduate from Inst. Technology in Boston next June, and that he and Eliza plan to go to Boston next summer to attend Grand Lodge Knights of Pythias, and invite me to accompany them. (T.S.R. 51. 2 P.M. 57. S.S. 54.)