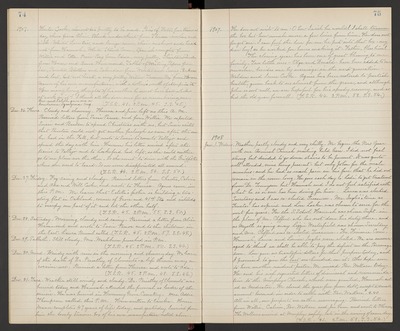 1907. Hester Cooke almost too pretty to be used. Pair of Felt far trimmed day shoes from Alice, Black underskirt from Theresa - woolen and silk White lace tie, and lounge cover, chair cushion and head rest from Hannah, White Stand Cover, Spanish wrought from Willie and Etta, Piece Bag from Edna, Very pretty, Christmas Card from Horace and Anna Hammond, Tablet of Writing paper from Ida, Painted Blotters and Calendar from Webster and Irving Parker and last but not the least, a very pretty "Willow Treasure Box" from Horace Mann of his own manufacture, with a dollar's worth of stamps in it. How many loving thoughts of his mother he most have had while at work on it! I thank all the dear ones for so remembering me. Geo. and Estelle gave me a handsome Smyrna rug. (T.S.R. 41. 2 P.M. 45. S.S. 45.)

Dec. 26. Thurs. Cloudy and showery. Theresa and Jim left us this A.M. Received letters from Susie Pascoe and from Willie. We expected Susie and Benton to spend Christmas with us, but Susie writes that Benton could not get another furlough so soon after the one he had in the Fall, but wrote to Susie to come to Valley's and spend the day with him. However his letter arrived after the trains to Valley's and to Lockeford had left, so she could neither go to one place nor the other. So she went to dine with the Griffiths where she used to board. So we were disappointed all around. (T.S.R. 44. 2 P.M. 54. S.S. 50.)

Dec. 27. Friday. Fog rainy and cloudy. Received letters from Chester, Calvin and Ada and Will Cooke, and wrote to Theresa. Agnes came in this P.M. We learn that Estella's father is building a two - story flat in Oakland, corner of Grove and 41st and intends to occupy one part of it and let the other half. (T.S.R. 45. 2 P.M. 55. S.S. 50.)

Dec. 31. Tues. Weather still windy and cloudy. Dr. Priestley of Clements was buried today and Hannah attended the funeral as leader of the music. He was buried in Harmony Grove Cemetery. Mrs. Addie Thompson called this P.M. Have written to Eureka. Horace Mann completes 47 years of life today, and yesterday I received from him the lovely treasure box of his own manufacture noted above.

1907. He does not write to me. O how I wish he would! I shall treasure the box but how much more a few lines from him. He does not forget me. I can feel the love for me he put into that box-my dear boy! as he worked for hours making it. Father, bless him! The closing year has been one of great blessing to our family. Two little ones. Olga and Donald have been added to our number, besides one by marriage in the next generation - Weldon and Irene Cooke. Agnes has been restored to partial health, given back to us almost from the grave, and although John is not well, we are hopeful for his speedy recovery, and so bid the old year farewell. (T.S.R. 46. 2 P.M. 58. S.S. 54.)

1908 Jan. 1. Wednes. Weather partly cloudy and very chilly. We begin the New Year with our Annual Church meeting held here. I did not feel strong but decided to go down stairs to be present. It was quite well attended, nine being present but only John for the male members and he had so much pain in his face that he did not remain in the room long. He goes each day to Lodi to get treatment from Dr. Tennyson but Hannah and I do not feel satisfied with what he is or ever has been doing for him. Laura was elected Secretary and I was re-elected Treasurer. Mr. Inglis-s time as Trusted has expired and love Locke was chosen to serve for the next five years. For the S. School Hannah was chosen Supt. in the place of Mr. Clifford who has not done his duty there, and as Myrtle is going away Lizzie Westerfield was chosen Secretary and Mrs. Clifford was re-elected Treasurer. For Finance Con. Hannah, Laura and Louise Inglis were elected. We are encouraged to think we shall be able to pay the deficit on the Parsonage soon. Lou gave us twentyfive dollars for that purpose today, and I promised to give the last one-hundred on it. Also hope soon to have another resident pastor. We missed Rev. Wallace today. He and his wife requested letters of dismissal and recommendation to the Murphy-s Church, which were granted, Hannah acted as Moderator. We closed the year free from debt, except a small amount borrowed in order to settle with Rev. Wallace. $4.40 All in all, our prospects are rather encouraging. Received letters from Willie, Calvin, Rev. Wallace and Jee Gam and wrote to Theresa. The Wallace arrived at Murphy-s safely, late in the evening of same day. (T.S.R. 41. 2 P.M. 58. S.S. 54.)