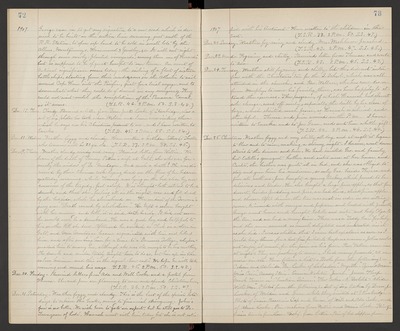 1907. George came in to get my signature to a new road which is desired to be built on the section line running just south of the R.R. Station, to open up land to be sold in small lots by the Allens, Montgomerys, Hammond & Yardley, &.c. It will cut right through some newly-planted vineyards, among them one of Howard's but is supposed to be of great benefit to our town. An event of National significance occurs today - the sailing of a fleet of sixteen battle ships, starting from their rendezvous in the Atlantic to sail around Cape Ham into the Pacific, just for a trial voyage, and to demonstrate what they could do if desired in any emergency. They could not wait until the completion of the Panama Canal, so it seems. (T.S.R. 46. 2 P.M. 52. S.S. 48.)

Dec. 17. Tues. Cloudy. Received a letter from Dean Jewett Locke of Sturbridge, also a set of six photos he took when Weldon and Irene were visiting them which he says are his Christmas present to me, and I have written to Eureka. (T.S.R. 45. 2 P.M. 58. S.S. 54.)

Dec. 19. Thurs. Weather cloudy, windy and rainy. Received letter from Willie. We learn of the death of Tammy Patton's wife at Galt, she who was formerly the widow of Dr. Montague. And such a death! She was discovered by their Chinese cook lying dead on the floor of her bedroom yesterday morning, while Tommy was lying in the bed close by, unconscious of the tragedy, fast asleep. It is though both retired to bed drunk, and that she, feeling ill in the night, sore and fell dead by the bedside, while he slumbered on. The verdict of the Coroner's jury was. "Death caused by alcoholism" He kept a saloon bought with her money, and both, it is said, drank heavily. It did not seem he would ever be a drunkard. He was a good boy and helpful to his mother till she died. Afterward he worked as Clerk in a store in Galt, and Mrs. Montague became acquainted with him and liked him, and after sending him for a time to a Business Collage, she persuaded him to marry her, although she was old enough to be his mother. She drank and undoubtedly taught time to do or, set him up in the Saloon business, and this is the sequel - how sad! We hope he will take warning and mind his ways. (T.S.R. 45. 2 P.M. 50. S.S. 48.)

Dec. 21. Saturday. Weather foggy and cloudy. This is the last of the special holidays to relieve the banks, owing to financial stringency. John's fare is no better. We wish him to go to expert, but he still goes to De-Tennyson of Lodi. Hannah went with him today but she is not satisfied

Dec. 24. Tuesday. Weather still fog rainy and chilly, but his did not interfere with the Christmas tree for the S. School, which was well attended in the church. and Rev. Wallace, who has come down from Murphys to move his family there, was hue happily to attend the exercises. The program of which Hannah had almost sole charge, went off nicely, especially the drill by her class of boys, which elicited much praise, so Hannah is relieved and thankful. Theresa and Jim arrived in the P.M. I have written to Eureka and to Jee Gam, and sent him a little gift. (T.S.R. 42. 2 P.M. 46. S.S. 44.)

Dec. 25. Christmas. Weather foggy and very chilly all day, and at night it began to blow and to rain, making a stormy night. I however, went down stairs to the dinner and tree. We had invited Geo. and family but Estelle's youngest brother and sister were at her house, and Carter, the brother was quite ill in bed, and she was obliged to stay and give him his medicine, so only Geo. besides Theresa and Jim ate with us. Jim brought a young turkey, which proved to be delicious and tender. He also brought a large pine-apple, so that for dessert, besides pudding and pies, we had olives, sliced pine-apple and cheese. After dinner, the tree was next in order in our sitting-room, trimmed with oranges and popcorn and loaded with presents. George went home and brought Estelle and sister and baby Olga to the tree, and we had a merry time. There was a "Teddy bear" for baby and the men seemed as much delighted and interested in it as she did. I was so chilled that I came back up stairs as soon as I could leave them, for a hot fire failed to keep us warm. John could not enjoy it much, for the pain in his face. Rev. Wallace came in at night. They are packing to move. I had many presents, 26 or more in all. here follows a list! - Books from the following: - Calvin and Adelaide, "Dr. Luke of Labrador". Myrtle" - Squaw-Man". Miss Cain", Nancy Stair". Eunice Webster. "Jewel". James Thorp. "Mark Twain on Christian Science". The Cookes. A Booklet = "Abide With Me". Photos from the following: = Set of six taken by Dean J. Locke, of Weldon and Irene while they visited at Sturbridge. Photo of Susie Pascoe in Cap and Gown, of Will and Ada Cooke, and of Alma Locke. Pin-cushions form Nellie and Marie Locke - Pair of linen towels from Lou - Hdkf. from Lottie - pair of bed slippers from