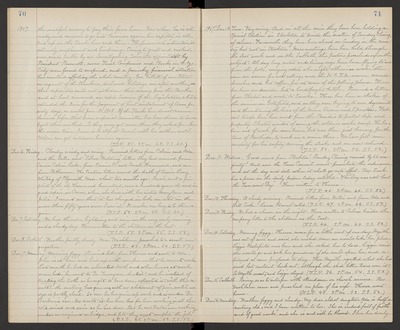 1907. the needful money to pay their fares home. Now when he is all ready and anxious to go into business again, his capital is all tied up in the Banks here and there. The financial situation is extremely unpleasant and hindering. Owing to graft and crookedness, made public by an Investigating Committee appointed by President Roosevelt, some Trust Companies and Banks in N.Y. City were forced to suspend, and a panicky financial situation has resulted affecting the whole Country. Gov. Gillett of our State on request of the Bankers, declared holidays one after another, so that depositors could not withdraw their money from the Banks and at last convened an extra Session of the Legislature, which extended the time for the payment of first installment of taxes for sixty days, or until Jan. 30, 1908. If the Banks here do not resume business before that time, a special Committee has been chosen to investigate their methods. So they may get more than they asked for. In the mean time, Irene is to stop and Sunol with her mother, until Weldon can get into some business again. (T.S.R. 51. 2 P.M. 63. S.S. 60.)

Dec. 6. Friday. Cloudy, windy and rainy. Received letters from Calvin and Ada, and the letter sent "Silver Wedding" letters they had received from Cousin Calvin Locke, from Eunice c. and Sarah Hammond, and one from Steilacoom. The Eastern letters record the death of Cousin Lucy Whiting of Plymouth, Mass. about two months ago. Sarah sent a fine photo of the old Hammond homestead, over a hundred years old in a good repair in Carver, where she lives with her sisters Mary Ann and Julia. I cannot see that it has changed in looks one whit in the more than fifty years since I saw it. It makes one long to be there again. (T.S.R. 52. 2 P.M. 60. S.S. 60.)

Dec. 9. Monday. Morning foggy. Received letter from Theresa and wrote to Ada. John is at home and laid up with sore face so that he cannot work. Last month he had an ulcerated tooth and when he was at work near Lodi, he went to Dr. Tennyson, dentist, and he instead of treating the tooth as he ought to have done, extracted it, with this result: the swelling has gone on with no abatement of pain, until one eye is partly closed. So now he has give up work and is under Dr. Barbour's car. No doubt it has been bad for him working in all the cold wind and rain as he has done. But he and Walter were working under an engineer on bridges, and felt they must complete the job. (T.S.R. 45. 2 P.M. 63. S.S. 56.)

1907. Dec. 10. Tues. Very rainy. And in all the rain they have been holding a Special Election in Stockton, to decide the matter of Sunday Closing of saloons. For months they have been closed on Sunday in the country but not in Stockton. Mass meetings have been held through the last week and on the Sabbath, the pastors preached upon the subject. All day long autos and livery rigs have been flying to and from the polls, carrying voters who might otherwise make the rain in excuse for not voting, and the W.C.T.U. women served lunches and hot coffee, free at some of the polling places. There has been no disorder but a hard-fought battle. Received a letter from Chester and wrote to Eureka. There has been a strike of the miners in Goldfield! and as they were trying to use dynamite and threatening the lives of the Mine Owners and Operators, Federal troops have been sent from the Presidio to protect life and property. Chester writes of seeing the soldiers make camp. He has been out of work for some time, but was then just leaving for the town of Rawhide, to work in a mine there. We have felt some anxiety for his safely during the strike and are now relieved. (T.S.R. 52. 2 P.M. 56. S.S. 52.)

Dec. 11. Wednes. Good news from Stockton! Sunday Closing carried by 66 majority! And now the Town Council must formulate the ordinance and set the day and date when it shall go into effect. Rev. Sink has a poem in the daily papers today entitled. "The Day was wet but the Town went Dry". Have written to Theresa. (T.S.R. 40. 2 P.M. 60. S.S. 52.)

Dec. 14. Saturday. Morning foggy. Theresa came for a little visit of one day. Myrtle was out-of-arts and said she wished someone would take her place. Lizzie Westerfield was here and has asked her to do so. Lizzie said she would go and ask her grandma if she could spare her, and returned at one prepared to stay. Then Myrtle regretted what she had said but couldn't back out, although she shed bitter tears over it. So Myrtle went, and Lizzie stayed. (T.S.R. 36. 2 P.M. 54. S.S. 52.)

Dec. 16. Monday. Weather foggy and cloudy. My dear eldest daughter Ada is half a century old, but I have written to her. She is indeed "full of faith and of good works", and she is and will be blessed. I love her dearly.