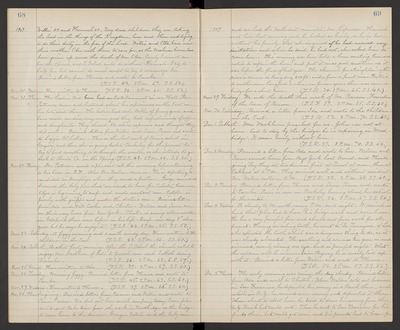 1907. Willie 42 and Hannah 40. Very dear children they are, taking the lead in the things of the kingdom, here and there and trying to do their duty in the fear of the Lord. Willie and Etta have now their mother Ober with them to care for, as the Nashua home has been given up since the death of Mr. Ober. Surely I cannot see how the Church and S. School could do without Hannah. I try to help her but cannot do much except to try to encourage her. Received letter from Theresa and wrote to Eureka. (T.S.R. 43. 2 P.M. 67. S.S. 56.)

Nov. 21. Thurs. The Ladies Aid have had an Entertainment in our Hall. Rev. Patterson came and lectured about his experiences in the East on his late visit there. The ladies had sale tables of fancy goods and home-made candies, very nice, and they had refreshments of coffee and doughnuts. They cleared $40. above expenses and though they did well. Received letters from Willie and Susie Pascoe and wrote to Lizzie McLellan. This is the last week of Susie's school in Gregory, and then she is going back to Berkeley for the present to try to find something to do through the winter, as she intends to go back to Shasta Co. in the Spring. (T.S.R. 43. 2 P.M. 64. S.S. 60.)

Nov. 22. Friday. Rev. Patterson made a pleasant call this morning before returning to his home in S.F. Also Rev. Wallace came in. He is departing to candidate in Murphys, when they need a pastor. George came and borrowed the baby pen that we used to have for Celeste, because Olga is beginning to creep and needs constant care. Estelle is Poorly with grippe and under the doctor-s care. Received letters from Ada and Will Cooke and Chester. Weldon and Irene are on their way home from New York. Chester is seeing colder weather in Goldfield than ever before in this life - temp. one day 8- above zero, but he says he enjoys it. (T.S.R. 44. 2 P.M. 65. S.S. 58.)

Nov. 28. Thanksgiving. Received letters from Eunice and Willie and wrote to Susie Pascoe. We did not have much company today. Even John could not take time from the work in Woodbridge on the bridge. to come home to the dinner. George. Estelle and the baby came

1907. and we had the Methodist minister, Mr. Lopeman. Hannah met him last evening and he looked so lonely, as he is here without his family, that she inquired if he had received any invitation and when he said he had not, she asked him to come here. This evening we have held a lever meeting here and voted to repair the lever and put it in as good condition as it was before the flood of last year. The channel for straightening the river's course is being dug 200 ft. wide, from a point near Foster's to another near Langford's, where in former years there was once a bridge for a short time. (T.S.R. 34. 2 P.M. 65. S.S. 60.)

Dec. 2. Monday. Received a letter from Ada and wrote to her. Weldon and Irene arrived home from New York last Mond. and Thanksgiving Day they ate two dinners, first at Sunol at noon, then at Oakland at 6 P.M. They arrived well and without accident. Mrs. Wallace called in A.M. (T.S.R. 33. 2 P.M. 68. S.S. 62.)

Dec. 4. Wednes. A cloudy A.M. with rainy P.M. and night. It rained so hard that John had to leave his bridge work and come home. He has a very painful face and should rest from work for the present. Having an aching tooth, he went to Dr. Tennyson and Lodi who extracted the tooth, which was a dangerous thing to do, as it was already ulcerated. The swelling and soreness has gone on and increased, nearly closing one eye, and is painful nights. What the outcome will be is uncertain. Anyway he is nearly laid up with it. Received a letter from Willie and wrote to Theresa. (T.S.R. 56. 2 P.M. 57. S.S. 56.)

Dec. 5. Thurs. The early morning was rainy, the day cloudy. Received letter from Ada and wrote to Chester. When Weldon sold out business in San Francisco, he deposited his money in a Bank there, and while in N.Y. he earned more money and deposited it there. When about to start home, he tried to draw his money from the N.Y. Bank but could not. Then he sent to San Francisco for his funds there, but could get none, and his parents had to borrow for