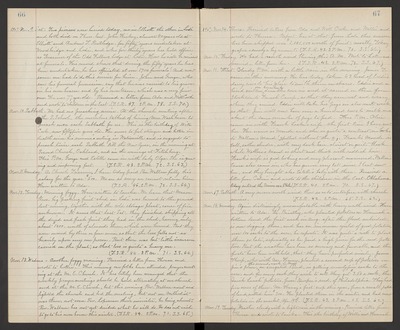 1907. Nov. 9. Sat. Two pioneers were buried today, one in Elliott the other in Lodi and both died on Thurs. last. John Hickey, almost 80 years old at Elliott and Andrew T. Rutledge, for fifty years undertaker at Woodbridge and Lodi, and who for thirty years has held office as Treasurer of the Odd Fellows Lodge at Lodi. How he will be missed at funerals. His record shows that during the fifty years he has been undertaker, he has officiated at over 1700 funerals! And now some one had to do this service for him. John and George, who saw his funeral procession, say that he was carried to his grave in his own hearse and by his own team, which was a very fine one. He was 77 yrs. old. Received a letter from Ada and Will Cooke and wrote to children in the East. (T.S.R. 47. 2 P.M. 78. S.S. 70.)

Nov. 10. Sabbath. We had no preaching service. At the church meeting after the S. School, the members talked of hiring Mrs. Washburn to preach once each Sabbath for us. This is the birthday of Will Cooke, now fiftyfive years old. He seems to feel stronger and better in health since his summer's outing in Watsonville and is engaged to preach twice each Sabbath till the New Year, in the morning at Second Church, Oakland, and in the evenings at Fitchburg. This P.M. George and Estelle came in with baby Olga. She is growing and improving fast. (T.S.R. 48. 2 P.M. 72. S.S. 63.)

Nov. 12. Tuesday. Morning foggy. Have written to Eureka. We learn that Mason Bros. big packing fruit shed in Lodi was burned to the ground last evening, together with the cold storage plant, cause of fire unknown. It seems that last Sat. they finished shipping all the dried and fresh fruit they had in the shed, leaving only about $1200. worth of almonds there, which were burned. But they were owned by three or four men, so that the loss falls not so heavily upon any one person. But there was but little insurance carried on the plant, so that loss is quite a heavy one. (T.S.R. 44. 2 P.M. 71. S.S. 64.)

Nov. 13. Wednes. Another foggy morning. Received a letter from Theresa and wrote to Lottie. This evening our folks have attended prayer meeting at the M. E. Church. It has lately been arranged that the weekly prayer meetings should be held alternately at our church and at the M. E. Church, but this evening Rev. Wallace went and lighted the church and led the meeting, but not one Methodist was there, not even Rev. Lopeman their minister, he being absent. Rev. Wallace has not yet decided what he will do. He does not wish to go to his own house this winter. (T.S.R. 44. 2 P.M. 71. S.S. 65.)

Nov. 16. Sat. Cloudy P.M. with a little rain in the evening. James T. came in this morning. He has today taken 63 head of Eddie's dairy cows to his place to milk them on shares. Eddie and a hired milker on horseback drove the cows in and it rained on them from Stockton to French Camp, so that they were wet and weary when they arrived. Eddie will take his pigs in also next week so that Jim will now have over a hundred cows to milk and about the same member of pigs to feed. This P.M. Alice came in with Frank Locke's wife - the first time I have met her. Her name is Maude and she is quite a contrast in looks to Wallace's Maud (spelled without the e). Frank's Maude is tall, rather slender, with very dark hair, almost or quite black, while Wallace's Maud is short and thick with reddish hair. Frank's wife is good looking and very pleasant mannered. Wallace's Erma also came in, who has grown very tall since I last saw her, and they brought also Estelle's baby with them. Received a letter from Calvin and wrote to the children in the East. Oklahoma today entered the Union as a State. (T.S.R. 40. 2 P.M. 70. S.S. 67.)

Nov. 18. Monday. Again distressingly uncomfortable with heavy north wind. Have written to Ada. Dr. Priestley, who planted potatoes on Hannah's bottom land the first week in Aug. after the flood subsided is now digging them, and has an immense yield of good potatoes, over 10 sacks to the acre, he reports. It was quite a risk to plant them so late, especially as he paid a high price for the seed potatoes. But the weather has been so sunny and favorable, and the frosts have been withheld, that they have perfected nicely. James Thorp, who with Mr. Haney, planted a second crop of potatoes on Jim's place, the second week in Aug. on irrigated land, is getting seventy five sacks to the acre, and for every sack they wish to sell they get $3.50 a sack, the "Quick Lunch" potatoes, from Burpee's seed, of Philadelphia. They had five acres of them. Mr. Haney's first crop this year, form a small patch of land, netted him $300. He planted them in the winter and had new potatoes in the market, Apr. 19th. (T.S.R. 43. 2 P.M. 65. S.S. 62.)

Nov. 19. Tuesday. Weather cloudy with a light rain in the evening. Received letter from Theresa and wrote to Eureka. This the birthday of Willie and Hannah.