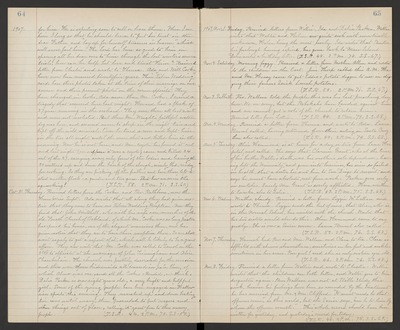 1907. for him. He is expecting soon to sell or lease them. When I see him I long so that he should learn to put his trust in the dear Father and "lay up for himself treasurers in heaven" which will never fail him. The lord has been so good to him in sparing all his dear ones to him through the last winter's severe trials, how can he help but love and trust Him? Received letter from Chester and wrote to Theresa. Ada and Will Cooke have now been married twenty five years. Their "Silver Wedding" card have their photos taken at the time of their marriage on one corner and their present photos on the corner opposite. They have changed in looks, Ada more than Mr. Cooke. I record a tragedy that occurred here last night. Howard had a flock of 27 geese running in the orchard. They were there all last winter and were not molested. But then Mr. Wright's faithful watch dog was here, and seemed never to sleep in the night time and kept off the wild animals. Once he tried a coon and kept him in the tree all night until the men shot and killed him in the morning. Now he is not here, and Mr. Coyote has found it out and last night (we suppose it was a coyote) came and killed 24 out of the 27, carrying away only four of the bodies and leaving the 20 scattered up and down the bank of the slough, nicely bled, ready for cooking. So they are picking off the feathers and have three left to start another flock - a gander and two geese. But how we miss the squawking! (T.S.R. 58. 2 P.M. 71. S.S. 60.)

Oct. 31. Thursday. Received letters from the Cookes and Rev. Rathbone, now the Home Miss. Supt. Ada writes that all along they had given notice that they were to have no "Silver Wedding" Reception. Now they find that John Mitchell, who with his wife were members of the old Fourth Church of Oakland, of which Mr. Cooke was so long pastor has opened his house, one of the elegant mansions there, and has given notice that they are to have their reception there. So we shall wait eagerly to get a report of it, which will be likely to be a grand affair. They also write that Mr. Cooke was called to Sunol on the 29h to officiate at the marriage of John Trimingham and Alice Chamberlain. The church was prettily decorated for the occasion and there were four bridesmaids all dressed in pale blue, of which Alma was one, and all the Cookes attended, we think. Delia Parker is now right years old, a very bright and helpful girl. Some of the young people have been engaged in Hallowe-en sports this evening. They marched up and down beating tin cans until weary, they proceeded to put wagons and other things out of place, calling it great fun to this annoy people. (T.S.R. 44. 2 P.M. 70. S.S. 58.)

1907. Nov. 1. Friday. Received letters from Willie, Ida and Delia Parker. Willie write that Walter and Helen are quite sick with some trouble unknown, Helen being the most poorly. Ida writes that Benton his furlough having expired, have gone back to Mare Island. Delia writes a birthday letter. (T.S.R. 44. 2 P.M. 74. S.S. 67.)

Nov. 2. Saturday. Morning foggy. Received a letter from Mother Allen and wrote to the children in the East. Jim Thorp called this A.M. He and Mr. Haney came to get Eddie's potato digger to use in digging their famous Quick Lunch potatoes. (T.S.R. 54. 2 P.M. 71. S.S. 67.)

Nov. 3. Sabbath Rev. Wallace told the people this was his lack preaching day here. We are sorry, but the Rebekahs have banded against him and we cannot get a vote of the church to retain him. Received letter from Lottie. (T.S.R. 44. 2 P.M. 73. S.S. 68.)

Nov. 5. Tuesday. Alice Hammond is at home for a day or two from Lane Hospital, and called. She says that Clarence Grant, who at the time of his brother Walter's death, was his mother's sole dependence, having left the University and gone into business, has since so failed in health, that a doctor has sent him to San Diego to recruit, and says he must have absolute rest from work. Parker goes only on crutches. Surely Mrs. Grant is sorely afflicted. Have written to Eureka, also to Delia. (T.S.R. 43. 2 P.M. 75. S.S. 68.)

Nov. 6. Wednes. Weather cloudy. Received a letter from Lizzie McLellan and wrote to Theresa. Lizzie sends the best of news, that Alice, who is in the Normal School, has united with the church. Would that her two sisters would also do this. Alice Hammond came to say goodbye. She is now a Senior nurse. Laura Bruml also called. (T.S.R. 52. 2 P.M. 76. S.S. 68.)

Nov. 8. Friday. Received a letter from Willie and wrote to Chester. Willie writes that the children are both better, and Walter goes to kindergarten again. Rev. Wallace was not at Bible Study this week, because his feelings have been so wounded by the treatment he has received from Mr. & Mrs. Clifford. "It must needs be that offences come", in this world, but the Senior says, "woe be to him by whom the offence cometh". This whole record should have been written for yesterday, and yesterday's record for today. (T.S.R. 46. 2 P.M. 75. S.S. 69.)