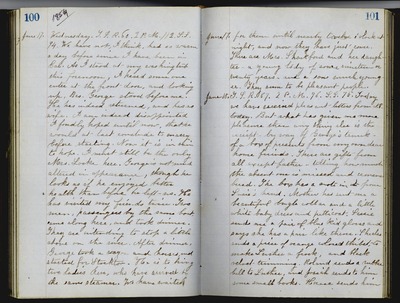 June 17. Wednesday. T.S.R. 60. 2 P.M. 112. S.S.94. We have not, I think, had so warma day before since I have been inCal. As I stood at my washing tubthis forenoon, I heard some oneenter at the front door, and lookingup, Bro. George stood before me.He has indeed returned, and has sowife. I am indeed disappointedI fondly hoped until now, that hewould at last conclude to marrybefore starting. Now it is in vainto hope. I must still be the onlyMrs. Locke here. George is not muchaltered in appearance, though helooks as if he enjoyed betterhealth than before he left us. Hehas visited my friends twice. Twomen, passengers by the same boat,came along here, and took dinner.They are intending to stop a littleabove on the river. After dinner,George took a wagon and horses andstarted for Stockton. He is to bringtwo ladies here, who have arrived bythe same steamer. We have waitedJune 17. for them until nearly twelve o'clock atnight, and now they have just come.There are Mrs. Shackford and her daughter -a young lady of some nineteen ortwenty years, and a son much younger.They seem to be pleasant people.June 18. T.S.R. 67. 2 P.M. 96. S.S. 75. Todaywe have received pleasant letters from N. E.But what has given me morepleasure than any thing else is thereceipt by way of George's trunkof a box of presents from my own dearhome friends. There are gifts fromall except father - telling how muchthe absent one is missed and remembered.The box has a note in it fromSusie's hand. Mother has sent me abeautiful bugle collar and a littlewhite baby dress and petticoat. Susiesend me a pair of blue kid gloves andsays she has a pair like them. She alsosends a piece of orange colored thibet, tomake Luther a frock, and blackvelvet trimming. Roland sends a rubberball to Luther, and Josiah sends to himsome small books. Horace sends him