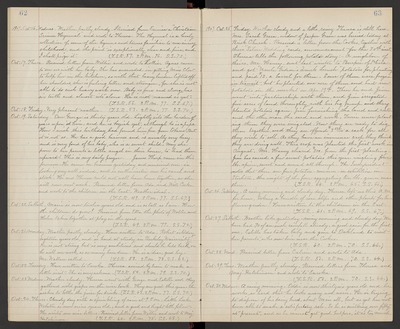 1907. Oct. 16. Wednes. Weather partly cloudy. Received from Eunice a "Christian Science Hymnal" and wrote to Theresa. The Hymnal is a lovely collection of some of the hymns and tunes familiar to me in my childhood, and the print is exceptionally clear and fine, and I shall prize it. (T.S.R. 57. 2 P.M. 76. S.S. 72.)

Oct. 17. Thurs. Received letter from Willie and wrote to Lottie. Agnes came to see us with her baby. She has succeeded in getting Miss Clow to help her in the kitchen, so with that heavy burden lifted off her shoulders, she is feeling better and stronger, for she is not able to do such heavy work now. Baby is fine and strong, has six teeth and almost sits alone. He is not named as yet. (T.S.R. 56. 2 P.M. 77. S.S. 67.)

Oct. 19. Saturday. Our George is thirty years old. Lightly sits the burden of years upon him, and he is boyish yet, although he is a papa. How I wish this birthday had found him free from tobacco! But it is not so. He has a good business and is usually very busy, and is very fond of his baby, who is sweet child. May she prove to her parents a little angel in their house, to lead them upward! This is my daily prayer. James Thorp came in this forenoon. He came on business yesterday and remained over - is looking very well indeed, and is enthusiastic over his ranch and stock. He and Theresa could not well leave home together, so she will come next week. Received letter from Ada and Will Cooke and wrote to the children in the East. Weather ideal. (T.S.R. 49. 2 P.M. 77. S.S. 67.)

Oct. 21. Monday. Weather partly cloudy. Have written to Ada. Robert is today eighteen years old, and is hard at study in Berkeley University. He is not strong but is very ambitions and should be held back, or he will over-work, as so many have done. He is a dear, good boy. Mrs. Wallace called. (T.S.R. 53. 2 P.M. 78. S.S. 68.)

1907. Oct. 25. Friday. Weather cloudy and a little rainy. Theresa is still here. Mrs. Sarah Green, widow of Jasper Green was buried today at Brick Church. Received a letter from the Cookes, together with their "Silver Wedding" cards, announcement for the 30th inst. Theresa tells the following potato story! - A neighbor of theirs, Mr. Haney, sent last winter to Burpee of Phila. and got - "Uncle Gideon's Quick Lunch" potatoes for planting and paid $12, a barrel for them. Some of them were frozen in transit, but he planted one acre of them and had new potatoes in the market on Apr. 19th. Then he and Jim went into partnership with them, and Jim irrigated five acres of land thoroughly with his big pump and they planted potatoes again, Jim furnishing the land and water and the other man the seed and work. Twice since planting them they were irrigated. Now they are ready to dig them together, and they are offered $350.00 a sack for all they wish to sell. As they have an immense crop they think they are doing well. This crop was planted the first week in August. Mr. Haney cleared $300. from the first planting. Jim has raised a few sweet potatoes this year weighing four lbs. apiece, sweet and sound all through. The Independent notes that there are four potatoes - common - on exhibition in Stockton, the weight of the four aggregating ten lbs. grown near there. (T.S.R. 64. 2 P.M. 65. S.S. 61.)

Oct. 30. Wednes. A rainy morning. Eddie is now thirty six years old and he works so hard that he looks weary and worn. He is trying to dispose of his dairy herd, about 100 in all, but as yet has not been able to make a satisfactory sale. So he is milking over fifty at present, and as he cannot get good helpers, it is too much