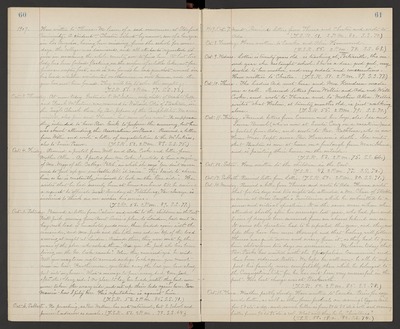 1907. Have written to Theresa. We learn of a sad occurrence at Stanford University. A student, Chester Silent by name, son of a lawyer in Los Angeles, having been missing from the school for some days, the college was dismissed, and all students requested to join in searching the whole county over to find him. At last his body has been found floating on the surface of a little lake, not far from an empty boat, and it was found he had given show wound in his head, whether accidental or otherwise is not know, and the gun has not been found. They will try to solve the mystery. (T.S.R. 51. 2 P.M. 77. S.S. 73.)

Oct. 3. Thursday. At noon today, Gertrude E. McIntire, only child of Mabel (Geffroy and Frank McIntire, was married to Willard, Otis of Stockton, in the Cong'l Church there, by Rev. Jopson of the Campbellites. We were invited, also Jim and Theresa, but none of us went. We suppose they intended to have Rev. Sink to perform the ceremony, but he was absent attending the Association in Reno. Received a letter from Willie and wrote a letter of congratulation to the McIntires, also the Susie Pascoe. (T.S.R. 52. 2 P.M. 89. S.S. 75.)

Oct. 4. Friday. Received a postal from Will and Ada Cooke and letter from Mother Allen. As I parted from Mr. Cooke, I quoted to him a saying of "Mrs. Wiggs of the Cabbage Patch", in which she says "You don't never need to put up [?] umbrella till it rains", This I said to cheer him, as he is constantly inclined to look on the "blue side". He writes that he had scarcely been at home an hour till he received a request of officiate next Sunday at Fitchburg. He always is inclined to think no one wishes his services. (T.S.R. 51. 2 P.M. 87. S.S. 77.)

Oct. 5. Saturday. Received a letter from Calvin and wrote to the children in the East. Will Jack, moving from Aunt Susie's place to Linden, had sent a hay-rack load of household goods over, then loaded again with the remainder, and Mrs. Jack and the little ones rode on top of the load arriving at night at Linden. Arrived there, they were met by the owner of the place who asked them, "are you the Jack who has been living on the Geo. Locke ranch"? When they answered "yes", he said "Well you may turn right around and go back again, you cannot come in here. Furthermore, you take away the load you have already put into my house". What a message to poor, weary dusty Mrs. Jack after that long ride! No place to lay her head, until they had once more taken the weary side, and set up their beds again here, Poor Mamie - how I pity her. He's reputation is against him. (T.S.R. 56. 2 P.M. 85. S.S. 71.)

Oct. 9. Wednes. Lottie is twenty years old - is teacher at near Porterville, the second year she has taught school. She is a dear, good girl, very devoted to her mother, and very sedate and conscientious. Have written to Chester. (T.S.R. 51. 2 P.M. 87. S.S. 77.)

Oct. 10. Thurs. The Ladies Aid met here and Mrs. Knudsen made me a call. Received letters from Willie and Ada and Will Cooke, and wrote to Theresa and to Mother Allen. Willie writes that Helen, at twenty months old, is just walking alone. (T.S.R. 55. 2 P.M. 79. S.S. 70.)

Oct. 11. Friday. Received Letters from Eunice and her boys, also Ida and Laura Bruml (who is now at Santa Cruz on a vacation) and a postal from Ada, and wrote to Rev. Rathbone, who is now Home Miss. Supt. since Rev. Harrison's death. Ida writes that Benton is now at home on a furlough from Mari Island and is painting their house on the outside. (T.S.R. 53. 2 P.M. 75. S.S. 66.)

Oct. 14. Monday. Received a letter from Theresa and wrote to Ada. Theresa writes that for two days and two nights she attended a Mr. Chase of Stockton as nurse at Miss Smythe's Sanitarium while he submitted to a severe and critical operation. It is the same man whom she attended shortly after her marriage last year, who had pres and prices of decayed bone removed from an abscess behind one ear. It seems the operation had to be repeated this year, and they now hope they have been more thorough and that healing will follow. Theresa was quite worn and weary from it, as they had to give him chloroform two days in succession. We learn today that Rev. Pirks has united with the Episcopalian Communion and has been ordained Rector. We hope he will now be able to support his family more comfortably than while he belonged to the Congregationalists, for he has not been very successful in the past. His last charge was at Beckwith. (T.S.R. 52. 2 P.M. 85. S.S. 78.)