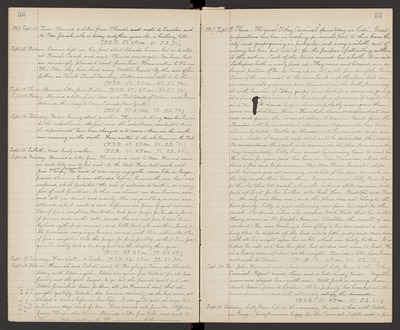 Sept. 11. Wednes. Eunice left us, her first start towards home, but is to atop at French Camp and visit Theresa over night. We have had an exceedingly pleasant visit from her. Have written to Theresa This P.M. They have laid away Walter Grant by the side of his father in Brick Church Cemetery. Parker was not able to be there. (T.S.R. 56. 2 P.M. 85. S.S. 74.)

Sept. 14. Saturday. We are having ideal weather. They are putting new desks, in to the school house, the first since the school house was built. And the departments have been changed as to rooms - those in the north now rooming in the south. Have written to the children in the East. (T.S.R. 49. 2 P.M. 80. S.S. 70.)

Sept. 16. Monday. Received a letter from Theresa and wrote to Ada. Howard came in and told me of his visit to the State Fair last week with Jim Thorp in Sacramento. He said it was very enjoyable - more like a large picnic than any he ever attended before, because the new law was enforced, which prohibits the sale of intoxicants within so many feet of such functions. So there was almost no drunkenness seen and all was decent and orderly. Also no gambling on races was allowed, which made a vast difference in favor of quiet and order One of Jim's neighbors, Mr. Miller, took first prizes for his dairy herd of Jerseys, and in the cattle parade Howard and Jim helped him by leading the prize animals, and little Niel who was there, headed the procession carrying a banner covered with blue ribbons. Another of Jim's neighbors took the prize for fine poultry, so that San Joaquin Co. really took a leading part in the display this year. (T.S.R. 49. 2 P.M. 79. S.S. 69.)

Sept. 18. Wednes. Hannah and Celeste went to Ringling's Circus in Stockton today with Eddie's girls. Eddie was given free tickets for all his family and the girls longed to go but the parents could not, so Eddie furnished team for them all, so Hannah went that she might gratify Celeste, also her own curiosity, as she had never attended a circus before in her life. It was quite good, she says, but a tiresome day's work for her. Have received calls from Mr. Clifford, James Thorp, also Alice. Received a letter from Willie and wrote to Theresa. Willie wrote on the 9th anniversary of their marriage. (T.S.R. 45. 2 P.M. 80. S.S. 72.)

1907. Sept. 19. Thurs. The great "Tokay Carnival" opens today in Lodi. Great preparations have been in making for months past to thus boom the "city" and grape growing in particular, and every available cent of money has been put into it, for the purpose of attracting settlers to this section. Each of the towns around has a booth. It is said Lockeford booth is nicely fixed up. They came and borrowed our enlarged picture of Dr. to hand up in it, as the founder of the town. Some of the men went to the river bank and there from took an immense wild grape vine and placed it in the booth, trimming it with bunches of Tokay grapes from Lockeford vineyards, giving it a fine [?] appearance, and there are fine specimens of vegetables, nuts, &.c. It is said larger almonds probably never grew than some on exhibition there. The whole town is resplendent in red and green, the Carnival colors. A marine Band from the Presidio will be in constant attendance. A queen who has been chosen by ballot, Bertha de Almade, is to be crowned, and an arch, made of concrete and steel is to be dedicate this morn. We understand this arch is to remain in its place permanently. Very unexpectedly, Lilly Greve arrived by morning train to visit us. Her home for years past has been in San Francisco, where she hires a flat and keeps roomers. Also, Mrs. Ham, her sister, stops with her and goes out nursing, and two of her sons, at work in the City, make their home there. Every summer, Lilly tries to go to the old Blue Mt. ranch, where the orchard still remains, and puts up fruit for her brothers who "bach" there. Rudolph and Fred are the only ones there now, and the place does not belong to the Greve family. Lilly is just returning now from her visit to the ranch. She found when she reached Mok. Hill that her brother Harry is now in St. Joseph's Home in Stockton, the result of an accident. He was hauling a load of hay to his cow and at a side-long place he slipped off the load into a little gully and came down with all his weight upon his ankle which was badly broken. It is hoped he will not lose his foot, but it does not seem to heal. He is a heavy man of about 200 lbs. weight. Received a letter from Eunice and wrote to Chester. (T.S.R. 50. 2 P.M. 85. S.S. 78.)

Sept. 20. Fri. John, Hannah and Celeste went with Lilly Greve to the Tokay Carnival. Report crowds there and a hot, dusty time. Myrtle came and stayed here with me. Will Jack is moving from Aunt Susie's place to Linden. All his property has been put into the hands of a receiver and will not nearly satisfy the demands. (T.S.R. 50. 2 P.M. 89. S.S. 80.)

Sept. 21. Saturday. Lilly Greve left us this morning. She rode to Lodi with Estelle in George's fancy trimmed buggy for the Carnival. Estelle made a fine