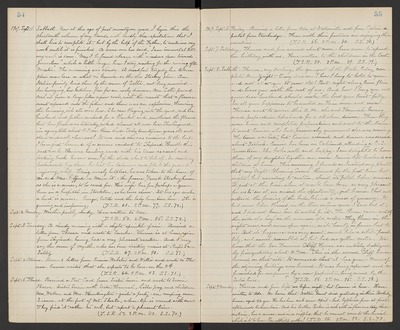 1907. Sept. 1. Sabbath. Now at the age of pact seventy one years, I begin this the thirteenth volume of my Records, with hardly the expectation that I shall live to complete it, but by the help of the Father, to continue my work until it is finished. As someone has said, "I am immortal till my work is done." May I be found always with "windows open towards Jerusalem" while a little longer here I stay waiting for the coming of the Master". The morning was cloudy. A dreadful tragedy has taken place near here on what is known as the old Starkey place. An Italian family lived there by the name of Celli, not long married. In hurrying her kitchen fire form an early dinner, Mrs. Celli poured coal oil from a large filler upon coals, with the result that a flame went upward into the filler and there was an explosion, throwing the burning oil all over her. She ran blazing into the yard, and her husband and father rushed for a blanket and smothered the flames but her flesh was literally cooked almost all over her. She lingered in agony till about 4 P.M. then died. Only twenty one years old and stout and well - how sad! It was said she was conscious to the last. I have just learned of a serious accident to Shepard Handle this past week. He was hauling wood with his team as usual and looking back he saw some of the sticks about to fall off. In reaching backward to fix them, he lost his balance and full to the ground injuring a hip. Being nearly helpless, he was taken to the home of Mr. and Mrs. Gifford on Main St. - the former Frank Starkey house as she is a nurse, to be cared for. His wife has for perhaps a year been in a hospital in Stockton, so he lives alone. At his age such a hurt is serious. George, Estelle and the baby have been here. She is growing and improving. (T.S.R. 60. 2 P.M. 77. S.S. 72.)

Sept. 3. Tuesday. A cloudy morning with a slight sprinkle of rain. Received a letter from Theresa and wrote to Eureka. Theresa is at home again from Skyland, having had a very pleasant vacation. And I may say the same of Myrtle, who has been visiting cousins at Pacific Grove Sultry. (T.S.R. 67. 2 P.M. 90. S.S. 77.)

Sept. 5. Thurs. Received a Post Card from Sister Susie and wrote to Susie Pascoe. Sister Susie with Sister Hannah, Lilla Jory and children Mrs. Wallace and Mrs. Huntington - quite a party - are camping near Sissons, at the foot of Mt. Shasta, whose top is covered with snow. They find it rather too cool, but report a pleasant time. (T.S.R. 57. 2 P.M. 80. S.S. 70.)

Sept. 8. Sabbath. Theresa, my darling, the youngest of the flock, today completes twentyeight. O my dear one! how I long to hold to you and not allow you to grow old! But right along time flies and bears you with the rest of us. And how I long you and your dear husband should make "the Lord your trust" fully. In all your happiness to be united in Him more and more. Theresa went to service this A.M. she and Hannah having made preparations before hand for a chicken dinner. Then they came home and completed preparations and went to the train to meet Eunice, who had previously announced she was coming. The train was late, but Eunice arrived and dinner was served about 3 o'clock. Eunice has been in Oakland attending a C.S. Convention. She looks well and happy. I am delighted to have three of my daughters together once more. Eunice left husband and children at home. This morning, I found as I watered my plants that my "Night - blooming Cereus " bloomed for the first time last night, but according to custom, closed its petal before sunrise. So, just at this time, when it would have been so very pleasant for us to see it, we missed the opportunity, just because I had not noticed the forming of the bud, behind a mass of greenery. It had never before bloomed, in the three or four years I have had it, and I did not know how to watch for it. The bloom came out of the side of a leaf in the manner of a cactus. They bloom in the night once, and never open again, so its beauty is forever lost to us. But its fragrance was very sweet, much like a white pond lily, and much resembled it, but had no yellow center. We learn that the San Francisco Cliff House was entirely destroyed by fire yesterday about 4 P.M. This is the second Cliff house burned on that site. It seems sad that it has gone. None of the adjoining buildings were burned. It was being repaired and refurnished for occupancy by a new proprietor, being owned by the Sutro heirs. (T.S.R. 56. 2 P.M. 95. S.S. 78.)

Sept. 9. Monday. Theresa and Jim left us before night, but Eunice is here. Have written to Ada. We learn that Walter Grant died yesterday in their Berkeley home, aged 22 yrs. He has been sick since April - had typhoid fever at first, afterwards tuberculosis. And his brother Parker is sick with inflammatory rheumatism, has a nurse, and is so crippled that he cannot come to the burial which is to be here. Poor afflicted mother! (T.S.R. 56. 2 P.M. 93. S.S. 73.