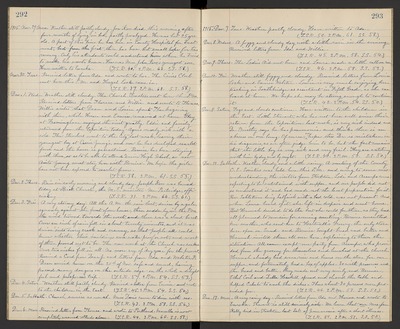 1915. Nov. 29. Mon. Weather still partly cloudy. Joe Kerr died this morning after four months of lying in bed, partly paralyzed. He was but 25 yrs. old. A part of this time he has been in County Hospital for treatment, but from the first there has been but small hope for his recovery. Only his attendants could understand him when he tried to make his wants known. He was Mrs. John Kerr's youngest son. Have written to Eureka. (T.S.R. 40. 2 P.M. 62. S.S. 58.)

Dec. 1. Wed. Weather still cloudy. The Church Trustees met here this P.M. Received letters from Theresa and Willie and wrote to Theresa. Willie writes that Dean and Louise spent Thanksgiving with them, while Horace and Eunice remained at home. They at Framingham enjoyed the visit greatly. Eddie and family returned from the Exposition today - Agnes nearly sick with a cold. The Stemlers went to the City last week, leaving their youngest boy at Carrie Young's, and now he has developed scarlet fever and the house is quarantined. Bernice has been staying with them, so as to be able to attend Union High School, so now Anita Young must stay here with Bernice. We hope the girls have not been exposed to scarlet fever. (T.S.R. 38. 2 P.M. 61. S.S. 55.)

Dec. 3. Fri. A very stormy day. All the A.M. the rain beat, driven by a gale, squarely against the front of our house, then suddenly, in the P.M. the wind turned towards the west, and there was a cloud burst. Over an inch of rain fell in about twenty minutes, and it was driven into every crack and cranny, so that people all could know whether their buildings were water-proof or not, and most of them proved not to be. The new work at the Church was soaked. Over two inches fell in all. No more cry of "dry year" for the present. Received a Card from Dean J. and letters from Ada and Webster P. Dean arrived home on the 20th of Nov. safe and sound, having passed many dangers on the outside edge - on the whole a delightful and prosperous trip. (T.S.R. 57. 2 P.M. 54. S.S. 53.)

Dec. 10. Fri. Weather still foggy and cloudy. Received letters from Louise Locke and Eunice Webster. Louise is very much enjoying her teaching in Southbridge as assistant in Fifth Grade, as she can board at home. We hope she may be strong enough to continue it. (T.S.R. 42. 2 P.M. 54. S.S. 50.)

Dec. 11. Satur. Fogs and clouds continue. Have written to the children in the East. Little Stewart, who has not been well since their return from the Exposition last week, is very sick indeed and Dr. Priestley says he has pneumonia and thinks there is an abscess on one lung. Of course, we hope the Dr. is mistaken in his diagnosis, as we often judge him to be, but the fact remains that the little boy is very sick and very frail. They are watching with him by day and by night. (T.S.R. 44. 2 P.M. 53. S.S. 50.)

Dec. 12. Sabbath. Weather cloudy and a little rainy. A meeting of the County C.E. Societies was held here this P.M. and owing to some misunderstanding, the visitors from Stockton, Lodi and Acampo were expecting to be entertained with supper, and over people did not so understand it and had made not the least preparation for it. Rev. Sahlstrom being half sick with a bad cold, was not present. And when Laura heard of it, she left in despair and went home. But Hannah decided to do the best she could for them, as they had all planned to remain for evening meeting. Bernice consulted her mother, who sent to Hartwell's Grocery, the only store here open on Sund. and Bernice bought bread and butter and Hannah invited them all over here, explaining to them the situation. All came in except one party from Acampo, who provided from the grocery for themselves and lunched at the church. Hannah already had some rice and beans on the stove for our supper, and fortunately had a box of apples. So with preserves and the bread and butter, they made out very nicely, and Bernice, Ethel Coil and Della Haskell spread and cleared the table and helped Celeste to wash the dishes. Thus about 30 persons were provided for. (T.S.R. 46. 2 P.M. 53. S.S. 52.)