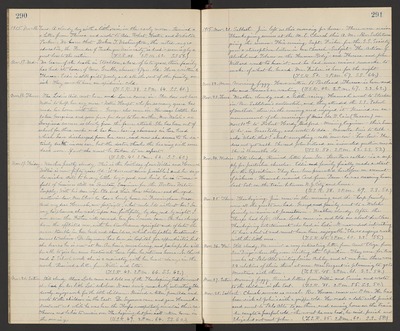 1915. Nov. 16. Tues. A cloudy day with a little rain in the early morn. Received a a letter from Theresa and wrote to Ada, Robert, Hester and Webster Parker. We learn that Booker T. Washington, the noted negro educator, the Founder of Tuskegee University, is dead - seemingly a great loss to the nation. (T.S.R. 48. 2 P.M. 62. S.S. 58.)

Nov. 18. Thurs. The Ladies Aid met here, and Laura came in. She does not have Nellie to help her any more - Nellie Haupt, who for so many years has made her home with them. George also came in. He says Estelle has taken Georgiana and gone for a few days to her mother, Mrs. Walsh - as Georgiana recovers so slowly from the fever attack. She has been out of school for three weeks and has been having abscesses in her head which have discharged from her ears, and now she seems to be entirely deaf in one ear, but the doctor thinks the hearing will come back soon. If not she must be taken to an expert. (T.S.R. 40. 2 P.M. 64. S.S. 60.)

Nov. 19. Friday. Weather partly cloudy. This is the birthday of our Willie and Hannah. Willie is now fifty years old - it does not seem possible! and he says he wishes still to be my "little boy" - good and kind he is to me - full of business still as Sanitary Engineer for the Bortoro Water Supply. With his dear wife, Etta, and their three children and the aged mother-in-law, Mrs. Ober - he has a lovely home in Framingham, Mass. And my dear Hannah, now forty eight, what could I do without her? In my helplessness, she waits upon me faithfully, by day and by night. I am sure the Father will reward her, for I never can. She has always been the afflicted one, with her troublesome eyesight and of late the nerve trouble in her back and shoulders, which osteopathic treatment seems to relieve. Dr. Seymour has been in hospital for appendicitis, but she learns he is now at Mr. Ambrose's, convalescing, and perhaps he will be able to give some treatments here before he returns home. In church and S. School work she is mainstay, with her heart always in the work. Received a letter from Willie and Etta. (T.S.R. 43. 2 P.M. 66. S.S. 62.)

Nov. 20. Satur. Still cloudy. Alma Locke came and told me of the Thanksgiving Entertainment she had for her little Lodi scholars. It was surely remarkably interesting. She dearly enjoys work for the little children. Received a letter from Ada and wrote to the children in the East. Dr. Seymour came and gave Hannah a treatment and while he was here the Thorps unexpectedly arrived in their car. Theresa and babies to remain over Thanksgiving but Jim will return home in the morning. (T.S.R. 47. 2 P.M. 64. S.S. 60.)

1915. Nov. 21. Sabbath. Jim left us this morning for home. There were union Thanksgiving services at the M.E. Church this A.M. - Rev. Sahlstrom giving the sermon. This evening Supt. Fisher for the S.S. Society gave a stereopticon lecture in our Church - Subject. "The Action of Alcohol and Tobacco on the Human Body" - and Theresa and John Willard went to hear it, and he had some curious remarks to make of what he heard. Mr. Fisher is here for the night. (T.S.R. 50. 2 P.M. 67. S.S. 64.)

Nov. 23. Tues. Weather cloudy and a little rainy. Hannah went to Stockton in Rev. Sahlstrom's automobile, and they attended the S.S. "School of Methods" there in the evening enjoyed it. Received an announcement of the marriage of Miss Ida B. Cain (Beacon) on Nov. 10th to Robert Hardy Bedford - Mining Engineer - their home to be in Grass Valley, and wrote to Ada. Marcella tries to talk - asks "What's that?" about everything - calls "moo-cow" - "boo-bow." She does not yet walk. She and John Willard are "animated question marks" She is 16 months old. (T.S.R. 50. 2 P.M. 62. S.S. 53.)

Nov. 24. Wednes. Still cloudy. Received letter from Ida. Rev. Burr called - is a supply for pastorless churches. Eddie and family finally made a start for the Exposition. They have been prevented heretofore on account of sickness. Hannah received Card from Dean - he was nearing home last Sat. on the train between N.Y. City and home. (T.S.R. 38. 2 P.M. 69. S.S. 50.)

Nov. 25. Thurs. Thanksgiving. Jim came in the morning and the Thorp family were all the guests we had. George and family went to a Walsh family re-union at Jamestown. Weather cloudy. After the Thorps had left, Alma Locke came in and told me about her Class Thanksgiving Entertainment she had in Lodi. It was indeed interesting to hear about it and must have been enjoyable. She so enjoys work with the little ones. (T.S.R. 45. 2 P.M. 60. S.S. 55.)

Nov. 26. Fri. Still cloudy. We received a very interesting letter from Aunt Eliza from San Diego, where they were visiting the Exposition. They were for two weeks at Palo Alto visiting Louise Ashley, and at one time there were 22 relatives of theirs there at once. Mrs. Sargent is planning to go to Montana with them. (T.S.R. 48. 2 P.M. 61. S.S. 54.)