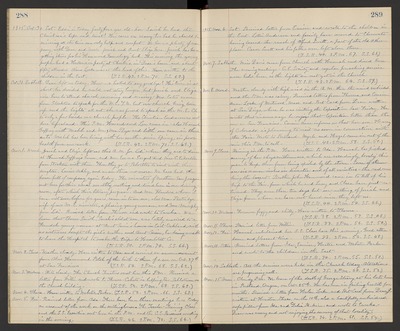 1915. Oct. 30. Sat. Eddie is today forty four yrs. old how I wish he had the Christian's hope and trust! His cares are many - too bad he should be missing all the time our only help and comfort. We have a plenty of company with Dean and Uncle Josiah and Aunt Eliza here. Josiah has been getting items for his "Hammond Genealogy" book. This evening the young people had a Hallowe'en party at Chester's, in Dean's honor, and about fifty attended. Alma Locke was at the head of this. Have written to the children in the East. (T.S.R. 43. 2 P.M. 70. S.S. 62.)

Oct. 31. Sabbath. Dean left us today. How we hated to say goodbye! His time is so short, he decided he could not stay longer, but Josiah and Eliza were here to attend church morning and evening. Mrs. Ester came from Stockton to speak for the W.C.T.U. but our church being torn up and the lights all out, she was forced to speak in the M.E. Ch. to only a few besides our church people. The Christian Endeavors met here beforehand. This P.M. Howard and Lou came in - also Hannah Geffroy with Mabel and Mr. & Mrs. Dye and little one came in their auto. Mabel has been living with her mother since Spring in poor health from over-work. (T.S.R. 42. 2 P.M. 72. S.S. 68.)

Nov. 1. Mond. Josiah and Eliza left us this A.M. for Lodi where they are to dine at Hannah Geffroy's house, and Mrs. Emma Sargent and Mrs. C.E. Norton from Stockton with them. Then they go to Palo Alto to visit with their daughter, Louise Ashley, and we see them no more. We have had the house full of company again today. The ministers of Northern San Joaquin met here for their usual monthly meeting and dined here in our dining-room, after which their literary program. And Mrs. Flanders, whom I have not seen before for years, came in to see me, also Mrs. Partridge, wife of our M.E. minister, a pleasing young woman, and Mrs. Murphy from Lodi. Received letter from Theresa and wrote to Eureka. We learn that Elmer Smith, Sarah's eldest son, was lately married to a Ferndale young woman at Aunt Susie's house in East Oakland, with no witnesses except the girl's mother and Aunt Susie, he being unable to leave the Hospital to make the trip to Humboldt Co. (T.S.R. 50. 2 P.M. 74. S.S. 66.)

Nov. 5. Fri. Received letter from Ada. There have been three meetings here today on account of the work on the meetinghouse. The Teacher-Training Class and the S.S. Executive met here in the P.M. and the C.E. Business meeting in the evening. (T.S.R. 46. 2 P.M. 70. S.S. 64.)

1915. Nov. 6. Sat. Received letter from Eunice and wrote to the children in the East. Lottie Anderson and family have moved to Clements having leased the ranch of Alfred Swett, a part of the old Athearn place. Oscar Swett and his father were left alone there. (T.S.R. 44. 2 P.M. 67. S.S. 61.)

Nov. 8. Mond. Weather cloudy with high wind in the A.M. then the wind subsided and the P.M. was rainy. Received letters from Theresa and Cousin Anne Locke of Westwood, Mass. and Post Card from Dean written at San Diego, where he was visiting the Exposition last Friday. He writes that in some ways he enjoys that Exposition better than the one in San Francisco. Cousin Anne informs us that her son, Harry of Colorado, is planning to visit us soon in Connection with the Fair. Wrote to Portland. Myrle and Hazel came in out of the rain this P.M. to call. (T.S.R. 42. 2 P.M. 58. S.S. 50.)

Nov. 9. Tues. Raining in the P.M. Have written to Ada. Hannah has picked many of her chrysanthemums, which are exceedingly lovely this year, to keep them from being spoiled by the storm. Some of them are six or seven inches in diameter and of all varieties - the red ones being the longest. Brother John Hammond came in to tell of his trip to the Fair, from which he and Lucy and Clara have just returned. They were there ten days but saw nothing of Josiah and Eliza, from whom we have not heard since they left us. (T.S.R. 44. 2 P.M. 54. S.S. 46.)

Nov. 15. Mon. Cloudy P.M. We learn of the death of George Steary at his late home in Portland, Oregon, on Oct. 25th. He has been in failing health for months. Received a letter from Helen Locke, and Post-Card from Dean J. written at Houston, Texas, on the 10th, also a beautifully embroidered sofa pillow from Ida and Delia Parker, and wrote to Eureka. Dean was weary and not enjoying the scenery of that locality. (T.S.R. 34. 2 P.M. 61. S.S. 54.)