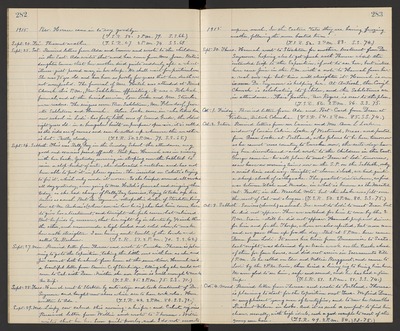 Sept. 25. Sat. Received letters from Ada and Eunice and wrote to the children in the East. Ada writes that word has came from Mrs. Joan Bate's daughter Emma that her mother died quite suddenly after a short illness just passed away in her sleep. We shall wait for particular. She was 75 yrs. old and has been so poorly for years that her death was not unexpected. The funeral of Mrs. Hatch was attended at Brick Church this P.M., Rev. Sahlstrom officiating. It was a Rebekah, funeral, and at the burial service, Lou Locke and Mrs. Stemler were readers. The singers were Rev. Sahlstrom, Mr. Folendorf, Jeanette Sahlstrom and Hannah. Alma Locke came in - she likes her new school in Lodi - has forty little ones of Second Grade, the oldest eight years old - in a bungalow built on purpose open air, it is called, as the sides are of canvas and can be rolled up whenever the weather is hot. Partly cloudy. (T.S.R. 50. 2 P.M. 79. S.S. 65.)

Sept. 26. Sabbath. This was Rally Day in the Sunday School the attendance very good and exercises passed off well. But poor Hannah was in misery with her back. Yesterday morning in stooping on the bathtub to raise a slop bucket of water, she dislocated a vertebra and has not been able to put it in place again. She insisted on Celeste's trying to fix it, which only made it worse. So she limped around all crooked all day yesterday, even going to Mrs. Hatch's funeral and singing them today as she had charge of Rally Day Exercises, trying to take up her duties as usual. But Dr. Seymour - osteopathic doctor of Stockton, being here at Mr. Ambrose's (where son-in-law he is), she had him come here to give her a treatment, and tonight she feels somewhat relieved. But he finds by measure, that her right leg is shorter by 3/4 inch than the other, and recommends a high-heeled and sold shoe, to make her walk straighter. I am having acute trouble of the bowels and called Dr. Barbour. (T.S.R. 51. 2 P.M. 70. S.S. 62.)

Sept. 27. Mon. Received letter from Theresa and wrote to Eureka. Theresa is planning to go to the Exposition, taking the little ones with her as she and Jim cannot both be absent from home at the same time, Hannah read a beautiful letter from Eunice C. of Sturbridge, telling why she could not come to Cal. with Dean. Neither she nor Louise is well enough to make the trip. (T.S.R. 45. 2 P.M. 75. S.S. 70.)

Sept. 29. Wed. Limpy cow calved this morning a heifer - and Celeste rejoices. Received letter from Willie and wrote to Theresa. Willie writes that he has been quite poorly, and I do not seem to

Sept. 30. Thurs. Hannah went to Stockton for another treatment from Dr. Seymour hoping also to get speech with Theresa about the intended trip to the Exposition, if not to see her, but instead here came Jim in the P.M. with a note to Hannah from her - a real mix-up but time will straighten it. Hannah is sure Dr. Seymour is helping her. At Antioch, the Cong'l Church is celebrating its Jubilee, and the Sahlstrom are in attendance. Their pastor, Rev. Rogers is new to the place. (T.S.R. 56. 2 P.M. 86. S.S. 75.)

Oct. 2. Satur. Received letters from our Eunice and Mrs. Ann L. Locke, widow of Cousin Calvin Locke of Westwood, Mass. and postal from Dean Locke at Portland, who plans to be here tomorrow as he cannot cross county to Eureka now, the auto - stage having been discontinued - and wrote to the children in the East. George came in - he will plan to meet Dean at Lodi tomorrow, as we have no morning trains now on the S.P. on the Sabbath, only a mail train each way. Tonight, at eleven o'clock, we had quite a sharp shock of earthquake. The greatest disturbance, we find was between Utah and Nevada in what is known as the Wasatch Mt. Fault, in the Wasatch Mts. but the shake was felt over the most of Cal. not a long one. (T.S.R. 50. 2 P.M. 80. S.S. 75.)

Oct. 3. Sabbath. Services (church) as usual. Geo. went to Lodi to meet Dean but he did not appear. Then we watched for him to come by the 2 P.M. train - still he did not appear. Hannah prepared dinner for him and for the Thorps, whom we also expected, but none came and we gave them up for the day. But at 5 P.M. here came Dean from Lodi. It seems his train from Dunsmuir to Sacto. last night, was detained by a train wreck on the tracks ahead of them for four hours, and did not arrive in Sacramento till 1 P.M. So he called on Edw. and Nellie Bergquest, and came to Lodi by the 2 P.M. train, then hired a livery rig to bring him here. We were glad to see him, safe and second, and he has had a fine trip. (T.S.R. 51. 2 P.M. 81. S.S. 74.)

Oct. 4. Mond. Received letter from Theresa and wrote to Portland. Theresa is planning to start for the Exposition next Tues. We find Dean a very pleasant young man of twenty five, and to me he resembles President Wilson in looks. And it is such a comfort to find him clean, morally, with high ideals, such a good example to most of the young men here. (T.S.R. 49. 2 P.M. 84. S.S. 75.)